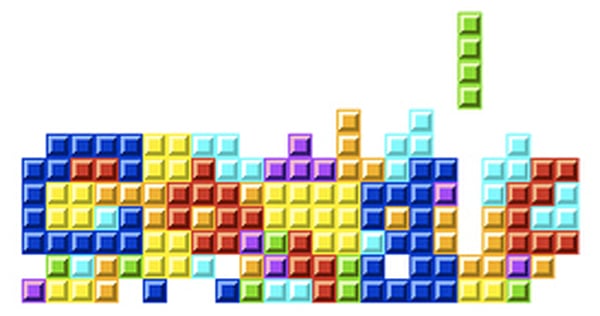 This is an updated version of one of my favourite stories from last year, edited to include a sequel study that develops and expands on the first one.

You’ve just been in a horrific car crash. You’re unharmed but the vividness of the experience – the sight of a looming car, the crunching of metal, the overwhelming panic – has left you a bit traumatised. You want something to help take the edge off and fortunately a doctor is on hand to prescribe you with… Tetris.

Yes, that Tetris. According to Emily Holmes from the University of Oxford, the classic video game of falling coloured blocks could prevent people who have suffered through a traumatic experience from developing full-blown post-traumatic stress disorder (PTSD). As ideas go, it’s practically the definition of quirky, but there is scientific method behind the madness.

Every traumatic experience flips a mental hourglass that runs out in about six hours. After that time, memories of the original event become firmly etched in the brain, greatly increasing the odds that the person will experience the vivid, distressing flashbacks that are the hallmark of PTSD. But the brain, powerful though it is, only has so much processing power available for laying down such memories. If something can be done soon enough to interfere with this process, the symptoms of PTSD could potentially be prevented.

Tetris, it seems, makes an ideal choice for that. To position its rotating blocks, players need good “visuospatial skills” – they need to see, focus on, and act upon the positions of different objects, all at high speed. These are the same sort of mental abilities that provide the foundations for flashback images.

Holmes’s idea is that playing Tetris after a shocking event would take up the same mental resources that would normally be used to consolidate future flashbacks. In doing so, the notoriously addictive game could act as a “cognitive vaccine” against PTSD and provide another example of video games actually being good for you.

In 2009, Holmes showed that her idea was sound in principle. She recruited 40 volunteers and showed them an unpleasant 12-minute film including graphic scenes of human surgery, fatal road accidents and drowning (although not Adam Sandler – there are some things that ethics boards just won’t allow). Thirty minutes later, half of the group played Tetris for ten minutes, while the other half sat quietly.

Over the next week, the recruits used a diary to record every time they had a flashback to the traumatic video. Their records revealed that the Tetris players experienced less than half as many flashbacks as those who never touched the game, and they scored lower on a tool that measures the strength of a person’s response to a traumatic experience. However, it was just their responses that differed. Their memories were all intact, and questionnaire showed that both groups remembered the same level of detail about the videos.

These results support Holmes’s theory that Tetris can help to prevent PTSD flashbacks by occupying the brain’s energies during the narrow time window when traumatic memories are consolidated. There are other treatments that probably work along similar lines. One of these, known as Eye Movement Desensitisation and Reprocessing (or EMDR) asks patients to keep a traumatic memory in mind while moving their eyes about. It’s possible that making eye movements – another visuospatial task – competes for the mental resources needed to process upsetting images and so reduces their impact.

But EMDR is only used to treat PTSD and there are several ways of doing that. Holmes’s goal is more proactive – she wants to find ways of preventing the symptoms from appearing in the first place. There are a few potential options for doing that, from drugs to psychotherapy, but few can be delivered so quickly or cheaply as a quick game of Tetris on a handheld machine.

Indeed, in this year’s follow-up study, Holmes showed that even if volunteers play the game four hours after they watch the video, playing Tetris reduces the number of future flashbacks. That provides a reasonable window of time in which to get people to actually play the game after they first experience a trauma.

Tetris has another big advantage in that it affects a person’s reactions to an event but not their actual memories of it. Holmes notes that they would feel relief, but their ability to, say, testify in court wouldn’t be diminished. This might give Tetris the edge over other attempts to deal with traumatic memories.

For example, the drug propanolol dulls the emotional sting of fearful memories. While it doesn’t erase the memories wholesale as some reports suggested, it does seem to interfere with memory for events, which clearly does have implications for legal hearings. As Holmes says, “We believe that that rather than ‘‘erasing’’ all trauma memory using pharmacological means, or ‘‘suppressing’’ unwanted memories using cognitive approaches, it is important for individuals to be able to choose to remember a traumatic event.”

Holmes also asserts that the benefits of Tetris are very specific to its nature as a visual and spatial exercise. The game isn’t just providing a simple distraction. She proved that this year by repeating her experiments using a Pub Quiz game instead of Tetris. Not only did this trivia game fail to provide the same benefits, it actually made things worse! In a study of 60 fresh volunteers, those who played the quiz actually experienced more flashbacks than those who didn’t play either game, even though they found both games equally enjoyable and difficult, and even though their memories of the video were just as accurate.

Holmes thinks that while visual tasks like Tetris compete with the same visual processing areas that lay down traumatic images in the brain, verbal tasks like the quiz compete with verbal processing areas that help people to make sense of what has happened. Occupying those processes could actually worsen trauma’s sting, as the new experiments suggest. Clearly, not just any computer game will do.

Holmes’s team have more work ahead of them before Tetris can actually be used in real-life clinical situations, although their latest update is a step in the right direction. Their next moves will be to understand exactly how the benefits of Tetris work, and to put the game to the test after a real traumatic event, rather than a mere video. The team will also need to find a way of combating the unfeasible stress that players experience when one of the long, straight blocks fails to show up for ages.

For the moment, the method clearly has some promise and in some ways, the results shouldn’t be surprising. Tetris is well-known for its ability to get inside the heads of those who play it, with many people continuing to play or see the game in their heads long after they’ve left their keyboards or joypads behind. In fact, the ability of any activity to overshadow the thoughts or dreams of people taking part in it has been labelled the “Tetris effect“. Perhaps the T in PTSD should stand for Tetris instead.

If the citation link isn’t working, read why here
//

GizmoCrazed - October 31, 2010 3
Cell phones have progressed rapidly in last few years - from the good old Nokia 3310 to the Apple iPhone and then to the...

iPhone Will Not Remain Safe From Malware Forever, Says Expert