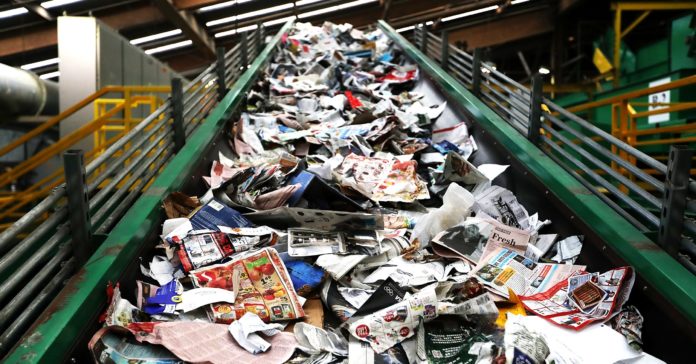 In 2003, San Francisco set the lofty objective of getting to zero waste by 2020. By that timeline, the city should soon be performing a ceremonial burial for the last pair of broken headphones and closing down its moldering landfills. But with the deadline approaching, the city has sent that goal itself to the garbage heap.

Earlier this month, as part of the Global Climate Action Summit, Mayor London Breed released a statement announcing new trash targets for 2030. The fresh plan concedes that “zero waste” isn’t happening by 2020. “That is a date-specific goal, and it is unlikely that we will reach that goal,” says Charles Sheehan, chief policy and public affairs officer for the San Francisco Department of the Environment. “But there’s a lot going on to continue moving towards zero waste.”

San Francisco has made massive strides towards its objectives, despite falling short in the end. By 2012, San Francisco had managed to recycle, compost, or reuse 80 percent of its waste—the highest rate of any US city; the countrywide average around that time was 34 percent. To get that far, the city relied on high-tech sorting and composting facilities. Now the San Francisco Department of the Environment says that if every resident sorted their waste into the right bins, the city could keep about 90 percent of its waste out of landfills.

But getting rid of the final bits of trash has proven challenging for San Francisco and the other cities trying to clean up their environmental footprints. San Francisco didn’t fail to meet its goal because it wasn’t following the most current and efficient methods of waste control, says Joan Marc Simon, the executive director of Zero Waste Europe. “It’s because they can’t recycle what is not recyclable.”

A lot of plastic still poses a problem. The recent uproar over plastic straws in the US—and subsequent legislation banning them in many places—helped highlight a small percentage of the plastics that we use only once, then throw away. These plastics are usually recyclable, but they became a more pressing issue after China stopped accepting the world’s contaminated recycling in November 2017. Researchers anticipate that this problem will add 111 million metric tons of plastic to the ocean by 2030.

Then there are the items that can’t be recycled at all, at least not easily. For example, some electronics and furniture contain flame retardants that are toxic if inhaled. That means they’re not accepted by some recycling centers, to protect their workers from exposure.

San Francisco’s new ambition is to reduce the amount of waste generated per person by at least 15 percent by 2030, and to get the amount of trash being burned or thrown in a landfill down by half. Jack Macy, senior commercial zero waste coordinator for San Francisco, refers to the first goal as “refuse and reduce.” During the plastic straw-pocalypse, consumers began to request paper or metal substitutes instead of disposables. In Europe, some coffee shops offer reusable mugs that consumers can borrow for a deposit.

But “refuse and reduce” isn’t always easy in practice, a fact illustrated by the tiny town of Kamikatsu, Japan, which is famous for its trash reduction measures. If its citizens have garbage that can’t be composted, they bring it themselves to the Hibigatani Waste and Resource Station and sort it into 45 separate channels. Nearby, there is a reuse shop where people can leave their unwanted—but still functional—items like clothing and tableware. If a product needs some love before it can be reused, there’s a craft store where about 20 experts (mostly local retirees) will rehabilitate it. Although the town, like San Francisco, keeps about 80 percent of its waste out of landfills, a key difference is the overall amount of trash. Each household in Kamikatsu creates 0.4 tons of waste in a year, whereas the average American generates about 0.8 tons. Scaling up Kamikatsu’s practices to serve a city of almost a million, or more, would be tricky.

Even Kamikatsu wrestles with stragglers. “We won’t be fully ZERO waste, as a town cannot solve the entire production and material change needed to happen in the society,” wrote Akira Sakano, chair of the board of directors at Japan’s Zero Waste Academy, in an email. She says Kamikatsu still sends diapers, cigarette butts, used tissues, some leather, rubber, and specific plastic materials to a landfill.

Ultimately, a city can only be as ambitious as its global supply chains allow. “For us, the priority is to reduce, more than recycle,” says Simon, of Zero Waste Europe. Macy, in San Francisco, echoes the same idea. With it, cities can continue to approach zero waste—even if they never truly reach it.

Updated 10-2-18, 4:15 PM ET: An earlier version of this story misstated the amount of waste generated by residents of Kamikatsu versus the U.S.

Meet your new chief of staff: An AI chatbot