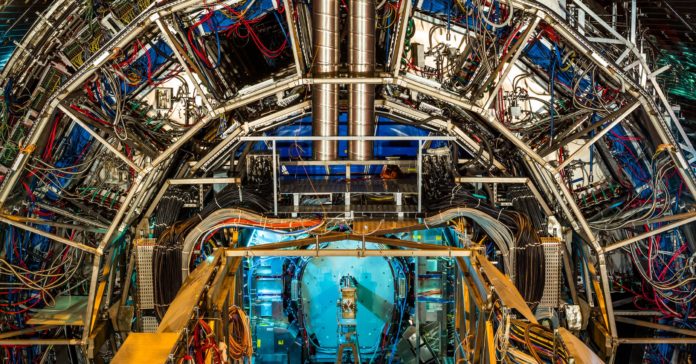 This week, of all weeks, should have been triumphant for women in physics. For her work on lasers, Canadian physicist Donna Strickland became the first female Nobel Laureate for the field after 55 years. She finally joined a short list consisting of just two other women, Marie Curie and Maria Goeppert-Mayer.

But Seyda Ipek barely had time to celebrate. The UC Irvine physicist was preoccupied: A dumpster fire had just erupted in a neighboring corner of physics culture.

Just days before the Nobels, at a workshop on gender issues in physics in Geneva, physicist Alessandro Strumia of the University of Pisa delivered a presentation about how physics discriminates against men. (Women make up 18 percent of all physics doctoral degrees worldwide, according to a survey by the American Physical Society.) Case in point: a hiring committee had once picked a woman over him, he said. Before an audience of young physicists, many of them women, he explained how men like working with things, and women like working with people. He proposed an experiment to support his belief that physics has biological roots: measure the ratio between the second and fourth fingers on the hands of women physicists, an indication of testosterone exposure in the uterus.

Ipek, who wasn’t at the workshop herself, heard about Strumia’s presentation through her Facebook community. “I immediately got enraged and started tweeting about it,” she says. “He was telling a group of young woman physicists that they were inferior to their male colleagues. This was just mind-boggling. I couldn’t believe that Strumia did this—that he used his platform this way, that he used his title this way. I was like, no. I will not stand by idly while you do this.”

Her outrage quickly spread on Twitter. She and 17 other physicists decided that they needed to publicly denounce Strumia’s presentation. Last weekend, they created a Slack channel to coordinate their response. Through the channel, the group, which includes about equal numbers of men and women at various points in their careers, discussed how to refute Strumia’s arguments, trading thousands of messages in a matter of days to debate word choice and syntax. “I don’t think any of us slept more than 4 or 5 hours a day in the last week,” says Ipek.

It was important to respond, says physicist Djuna Croon, so that younger female physicists explicitly knew that established members of the community didn’t condone Strumia’s ideas. “I know from experience how difficult it is to deal with impostor syndrome,” says Croon, who works for TRIUMF, a particle accelerator in Canada and received her PhD in 2017. “I just think of myself from a few years ago. If these statements had been unopposed, it would have been a huge hit for me.” As a student, Croon recalls a physics teacher joking that women belong “in the kitchen,” and that people would encourage her to go into medicine, even though she excelled in physics.

In on an online letter, which they call Particles for Justice, they push back on the arguments, point by point, in Strumia’s presentation. They dug into Strumia’s personal anecdote of getting passed over for an opportunity in favor of a woman. His publications had been cited more often than hers, he’d said. “He reduces the quality of a scientist to one number, that scientist’s citations,” says Croon. “There is so much more to a scientist, and to the hiring process, than that one number.” Citations can be particularly misleading as a metric of a physicist’s ability: about a third of Strumia’s publications are papers written by gigantic collaborations of more than a thousand people. In these papers, “we can safely conclude his contribution […] was modest,” they write in the letter.

They published the document on Thursday evening after recruiting signatures from about 200 physicists. They also created a form so that physicists could keep signing the letter after publication. Within a day of publication, 1,400 more academics submitted signatures. “I’m not remembering the last time, as a community, we really jumped up like this,” says physicist Brian Nord of Fermilab, who signed the letter.

Strumia’s lecture is only the latest example in a long list of recent sexist controversies in physics. In 2014, British astronomer Matt Taylor went on television wearing a button-down shirt covered in cartoon drawings of half-dressed women, later dubbed #Shirtgate. In 2016, Nobel Laureate Barry Barish, who won the 2017 Nobel Prize for helping discover gravitational waves, delivered a presentation with a slide that showed a man writing on a woman’s bare back. A YouTube video starring one of this year’s Nobel Laureates, Gérard Mourou, shows him dancing in a lab surrounded by scantily clad female students.

Despite these high-profile controversies, some scientists still don’t believe systemic sexism or racism exists in their field, says Nord. “Humans in this world experience all kinds of discrimination,” he says. “Just because we’re the scientific community doesn’t mean we’re separate from that larger conversation. It’s important that the world understands this, that scientists understand this.”

But in response to these cultural missteps, scientists tend to keep their head down and tell each other to focus on the science. But this is a mistake, says Ipek. “I really dislike it when people say, ‘You’re a scientist. Why do you care about these things?’” she says. “I work here. It’s a workplace first. Workplaces need respectful relationships.”

They’re optimistic that the letter will have a lasting impact. CERN, which organized the workshop, issued a statement calling Strumia’s presentation “highly offensive,” and suspended their relationship with Strumia on Monday. “I am tired and frustrated and ready for big change,” says Nord.

“I had to put a halt on research,” says Ipek. “I couldn’t work on anything this week. That’s bad.” Research isn’t the only thing demanding work these days—so is the culture of physics itself.