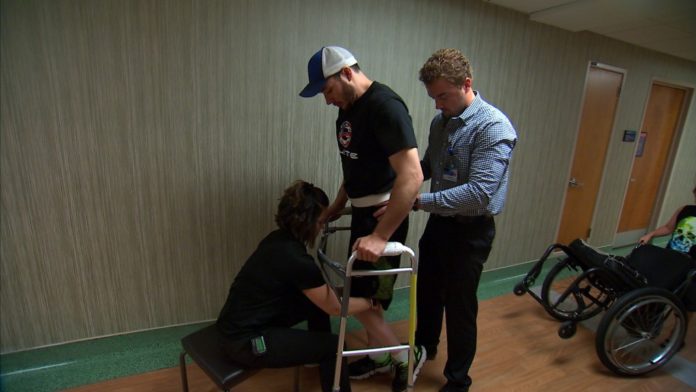 Three paraplegic patients can walk again thanks to an intense rehabilitation program with a device that sends electricity down the spine, researchers report Monday in two separate studies.

A snowmobile accident nearly 4 years earlier had paralyzed the then 26-year-old Jered Chinnock from the middle of his back down. He couldn’t move or feel anything below his sixth thoracic vertebrae — a spinal segment in the middle of the rib cage — where he had broken his back. Now, he can voluntarily move his lower limbs.

“The reason why this is important is because the patients’ mind or thoughts was able to drive the movements in the legs,” said Kendall Lee, a neurosurgeon at the Mayo Clinic in Rochester, Minnesota, who co-led one of the new studies published Monday in the journal Nature Medicine. 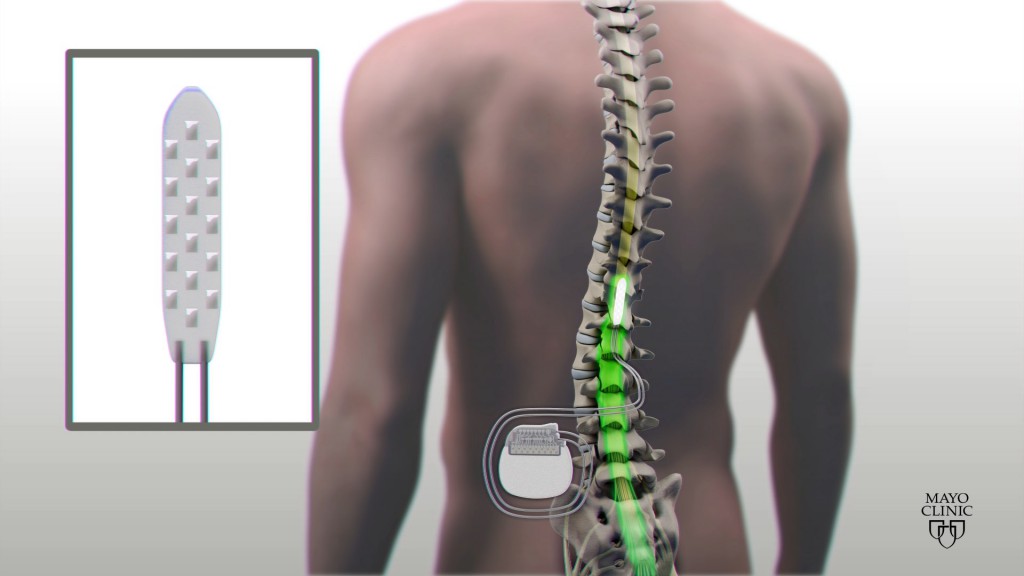 To achieve such recovery, the researchers first implanted an electrode into Chinnock’s epidural space, the covering of the spinal cord, below his injury. A handheld device controlled how much voltage the apparatus used to stimulate the nervous tissue in the spinal cord. The researchers had shown in earlier work that the epidural electrical stimulation, or EES, let the patient stand and make stepping motions while lying down or suspended from an apparatus that supported his body weight.

Now, Lee and colleagues wanted to find out whether they could restore the patient’s ability to stand and walk independently. So they began a rehab program that combined EES with specific movement training. It took more than 100 visits to the clinic over nearly a year. In that time, scientists optimized the voltage needed to let him move his legs. Finally, Chinnock regained the ability stand and walk, first on a treadmill while using support rails with his upper body to maintain balance, and then over the ground with a front-wheeled walker. In one session, he was able to take more than 300 steps on his own. Over the course of the program, the patient covered 102 yards, nearly the length of a football field.

In a separate study published Monday in the New England Journal of Medicine, Claudia Angeli of the Kentucky Spinal Cord Injury Research Center at the University of Louisville and her team report two other paraplegics also regained ability to walk thanks to the same rehabilitation program Chinnock undertook.

Although the researchers are not sure exactly how the electrical stimulation wakes up nervous tissue to allow it to regain the ability to take information from the brain and move limbs, they say the study demonstrates that the human spinal cord can transform years after injury to recover intentional movement.

“We really want to understand how that occurred, why it occurred and going into the future, potentially who we can help going further with this research protocol,” said Kristin Zhao, a biomedical engineer and physical rehabilitation specialist at the Mayo Clinic who co-led the research with Lee.

She would like to build on the research even more. “There are other areas of function we can impact — bowel, bladder, sexual function — [that] could provide much greater quality of life,” she said. “Movement is good, but we’d like to expand those directions as well.”

GizmoCrazed - January 18, 2012 0
Each day iPhone case manufacturers roll out some brilliant new cases. First we heard about the $10,000 worth iPhone case, and thought that it was...

Twitter tests suggestions on people to unfollow for when your timeline...

How Camera Lenses Can Beautify or Uglify Your Pretty Face [PHOTO]

What To Expect With The Renault Zoe