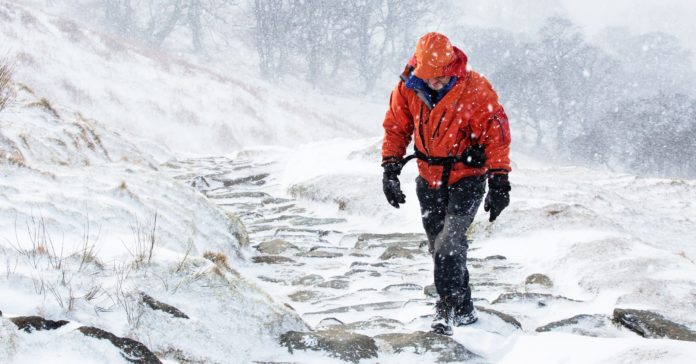 Outdoorsy types are well-versed in the differences between down feathers and synthetic fibers, the two most common fillings for puffy gear like jackets, gloves, and sleeping bags: Down compresses, but stops insulating when it gets wet. Synthetics keep you warm even when they’re soggy, but resist being stuffed into tight spaces.

But there’s another tradeoff to consider, an environmental factor that even nature lovers tend to overlook: In a landfill, down feathers biodegrade relatively quickly. But polyesters—the long-chain molecules of plastic that make up synthetic insulation—can take centuries to break down. That’s unfortunate, because odds are high that your favorite puffy jacket will end its life in a trash heap: Second to oil, the fashion industry is the largest polluter on earth. Of the 25 billion pounds of textiles the US generates per year, 85 percent of it—some 70 pounds’ worth, per US citizen—winds up in a landfill. And when those textiles are made of synthetic stuff like polyester insulation, it lingers and accumulates.

Which is why four years ago, materials scientists at PrimaLoft—a juggernaut of synthetic insulation and the supplier of fake, fluffy stuffing to customers like Patagonia, Eddie Bauer, and the US military—began working on a product that would biodegrade faster than existing polyester fills. Today, the company unveils its solution: Called PrimaLoft Bio, it’s functionally identical to PrimaLoft’s previous synthetic insulators but biodegrades much, much faster. That’s a first for the industry, which is why PrimaLoft CEO Mike Joyce calls it the company’s most significant technology launch in history.

The secret isn’t in the material itself. “The fibers are actually the same,” says organic chemist Charles Lancelot, an expert on plastics who consulted with PrimaLoft on its new insulation. “What’s different is they now contain an additive that makes them more attractive to the microorganisms that cause it to degrade.” In a landfill, the microbes responsible for biodegradation usually see polyester fibers as a last resort because they can’t feast on them directly; they have to first expend energy to break them into bite-sized bits. PrimaLoft’s additive—details of which the company declined to share—attracts microorganisms to the polyester fibers and coaxes them into producing the enzymes that break it down, leaving behind water, methane, and carbon dioxide.

Third party analysts tested the new insulation by combining it with landfill material—like composted solids and plant sludge—and sealing the mixture inside a glass test vessel, cutting it off from oxygen. (The biodegradation process in many industrial landfills is anaerobic.) That container connects to a large plastic cylinder filled with water. As the microbes present in the landfill mass broke down the the material in the glass container, the methane and carbon dioxide that were generated passed to the cylinder and bubbled to the top. By monitoring the volume and composition of the gathering gasses, the analysts could determine how much of the test sample had degraded in the smaller cylinders.

Under those tightly controlled lab conditions, PrimaLoft Bio decomposed almost completely in 394 days. (That’s comparable to the time it takes to degrade cellulose, a naturally occurring polymer that’s often used as a control in biodegradation tests.) In the same time span, traditional synthetic fills hardly decompose at all.

Here’s the fine print: The laboratory tests PrimaLoft had performed on its new synthetic—a standardized analysis developed by the American Society of Testing and Measurements—is an accelerated test. Materials that take a year to biodegrade under lab conditions, even natural ones like cellulose, can take 20 to 100 years to decompose completely under real-world conditions, depending on the type of facility in which they’re processed.

The upshot is that in a landfill where traditional synthetics would take centuries or longer to break down, PrimaLoft Bio will take decades. “That’s still a long time, but it’s faster by a factor of ten at least,” Lancelot says. “And a factor of ten is big. You can drive your car 75 miles per hour, but if you drive it ten times faster? You’re going the speed of sound, man.”

If textiles decomposed faster, they could help turn landfills into productive facilities, by capturing the gas emanating from its contents and converting it into usable energy. Lancelot says that if the synthetic polyesters that ended up as waste every year were biodegraded to completion, instead of sitting there doing nothing, the gas they produced could be converted to 23 billion kilowatt hours of electrical energy—enough to power more than 2 million US homes for a year.

The amount of energy harvested from products containing PrimaLoft Bio will be considerably smaller, of course. Much as they’d probably like to be the world’s sole supplier of synthetic insulation, not every jacket, duvet, and sleeping bag is stuffed with PrimaLoft product. But the bigger hitch is that the outermost layers of most insulated products—the sausage casing, if you will—are not yet designed to decompose. Which means that when a fancy new PrimaLoft Bio jacket winds up at the local landfill, the microbes there will still need to penetrate a non-biodegradable perimeter before they can get to the good stuff inside.

That’s the bad news. The silver lining is that PrimaLoft’s new insulation isn’t slated to appear inside its brand partners’ products until fall 2020—which means their materials scientists have two years to develop a shell that biodegrades, as well.