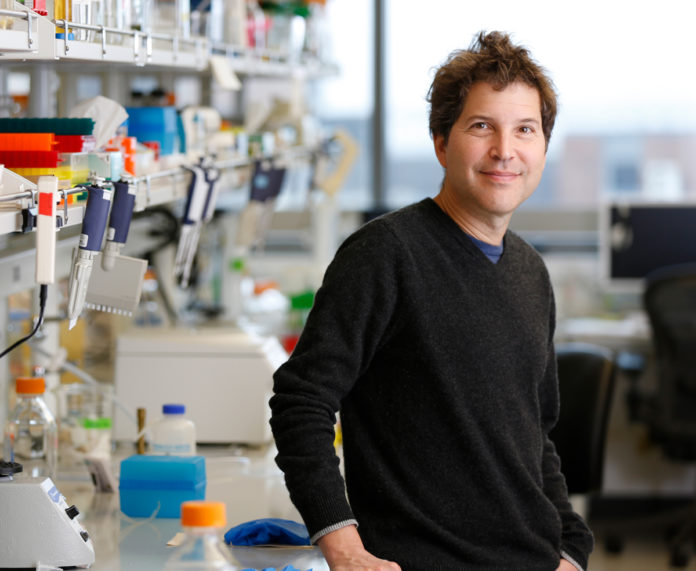 “We’ve figured out a way to put these building blocks together at the right angles to form these very complex nanostructures,” Baker explains. He plans to stud the exterior with proteins from a whole suite of flu strains so that the immune system will learn to recognize them and be prepared to fend off future invaders. A single Death Star will carry 20 different strains of the influenza virus.

Baker hopes this collection will cover the entire range of possible influenza mutation combinations. This all-in-one preview of present and future flu strains could replace annual shots: Get the Death Star vaccination, and you’ll already have the requisite antibodies in your bloodstream.

As Baker bets on designer proteins to defeat influenza, others are betting on David Baker.

After revolutionizing the study of proteins — molecules that perform crucial tasks in every cell of every natural organism — Baker is now engineering them from scratch to improve on nature. In late 2017, the Open Philanthropy Project gave his University of Washington Institute for Protein Design more than $10 million to develop the Death Star and support Rosetta, the software platform he conceived in the 1990s to discover how proteins are assembled. Rosetta has allowed Baker’s lab not only to advance basic science and pioneer new kinds of vaccines, but also to create drugs for genetic disorders, biosensors to detect toxins and enzymes to convert waste into biofuels.

His team currently numbers about 80 grad students and postdocs, and Baker is in constant contact with all of them. He challenges their assumptions and tweaks their experiments while maintaining an egalitarian environment in which ideas may come from anyone. He calls his operation a “communal brain.” Over the past quarter-century, this brain has generated nearly 450 scientific papers.

“David is literally creating a new field of chemistry right in front of our eyes,” says Raymond Deshaies, senior vice president for discovery research at the biotech company Amgen and former professor of biology at Caltech. “He’s had one first after another.”

When Baker was studying philosophy at Harvard University, he took a biology class that taught him about the so-called “protein folding problem.” The year was 1983, and scientists were still trying to make sense of an experiment, carried out in the early ’60s by biochemist Christian Anfinsen, that revealed the fundamental building blocks of all life on Earth were more complex than anyone imagined.

The experiment was relatively straightforward. Anfinsen mixed a sample of the protein ribonuclease — which breaks down RNA — with a denaturant, a chemical that deactivated it. Then he allowed the denaturant to evaporate. The protein started to function again as if nothing ever happened.

What made this simple experiment so striking was the fact that the amino acids in protein molecules are folded in three-dimensional forms that make origami look like child’s play. When the denaturant unfolded Anfinsen’s ribonuclease, there were myriad ways it could refold, resulting in structures as different as an origami crane and a paper airplane. Much as the folds determine whether a piece of paper can fly across a room, only one fold pattern would result in functioning ribonuclease. So the puzzle was this: How do proteins “know” how to refold properly?

“Anfinsen showed that the information for both structure and activity resided in the sequence of amino acids,” says University of California, Los Angeles, biochemist David Eisenberg, who has been researching protein folding since the 1960s. “There was a hope that it would be possible to use sequence information to get three-dimensional structural information. Well, that proved much more difficult than anticipated.”