Leprosy Reborn: How a Long Maligned Disease Might Unlock the Secrets of Stem Cells 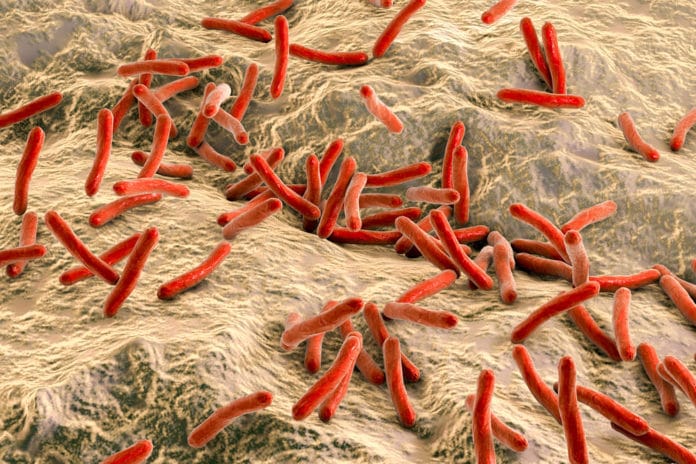 For the past 25 years, Anura Rambukkana has been studying a disease that’s already been cured. He studies leprosy, a disease that was once the scourge of humanity before a course of drugs developed in the mid-20th century brought it under control.

For decades, he’s worked in a field that sees little funding and few new faces, and many of his contemporaries have moved on to higher-profile projects involving diseases that attract grant dollars. Rambukkana, a professor of regeneration biology at the Centre for Regenerative Medicine at the University of Edinburgh, likely would have joined them, but for a singular captivation by the leprosy bacterium — and the hunch that it might have something to teach us. 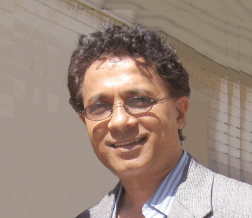 Working as a graduate student in Amsterdam analyzing skin samples from leprosy patients, he picked up on an intriguing facet of the bacteria’s behavior. The cells it infected didn’t die — in fact, they looked exceedingly normal. It was a hint that the bacteria had ulterior motives.

“I was fascinated with what this bacteria was doing to the host,” he says. “I thought, this is a real niche for me to use this bacteria as a model to understand cell biology.”

Speaking about the leprosy bacteria — often just “the bug” in his vernacular — Rambukkana sounds as enthralled today as he did a quarter-century ago. The bug can be maddeningly difficult to study, but the array of clever mechanisms it uses to navigate our bodies also makes it a rewarding quarry.

After receiving his doctorate, Rambukkana moved to The Rockefeller University in New York, where he continued to shadow the bacteria through the passageways of our internal systems. Then he moved on to the University of Edinburgh. There, in 2013, after some 20 years of research, he made one of the biggest breakthroughs in our understanding of leprosy in recent times — their ability to infiltrate and manipulate the inner workings of our cells. Most bacteria get into our cells, but Rambukkana found that M. leprae also has the ability to change them at will, making something he says is almost like a stem cell.

A Most Unlikely Killer

Mycobacterium leprae has haunted humanity for millennia, leaving victims scarred, deformed and usually outcasts. Lepers have been near-universally reviled — locked in colonies, forbidden from marrying and expelled from cities. Their appearances in literature, whether in Chaucer or the Bible, paint them as morally unfit and brimming with ill-will. 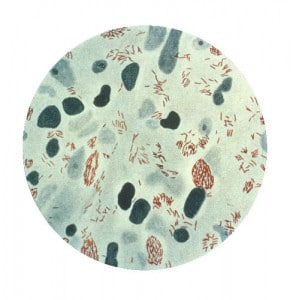 This is somewhat ironic, because  M. leprae is almost comically unfit for the task of infecting and inhabiting humans. The bacteria cannot survive outside of a host, but only prefers very specific cells in our bodies. It prefers temperatures far lower than we possess, passes between hosts with difficulty and reproduces exceedingly slowly. To top it off, 95 percent of the population or more possesses a genetic immunity to them.

But, as any artist understands, limitations breed creativity. And the leprosy bacteria has benefitted from a truly masterful stroke of evolutionary cunning.

Once in our bodies, the microbe makes a beeline for Schwann cells, which are responsible for creating the myelin sheaths that safeguard our nerves. After forcing its way inside, M. leprae delves into the inner workings of the cell with the deftness of a seasoned hacker. Though the exact mechanism isn’t yet known, the bacteria can access the cell’s DNA — the living blueprint for its behavior — and toggle specific genes in Schwann cells on and off at will.

The end result is to turn a fully mature cell back into something resembling a stem cell, with all the metamorphic powers that entails. The human equivalent would be stealing a Transformer.

Before they become blood, bone, skin, nerves, our cells start out as something like cellular putty – stem cells. These cells can go on to become just about anything in our bodies, guided by small genetic tweaks. It’s how our bodies create such a diversity of tissues, and the ability to create any type of cell at will could treat a vast array of injuries and diseases. Researchers are getting better at creating and manipulating stem cells, but the field is still in its early days. We just don’t know enough about how stem cells are created and behave to fully utilize their potential. But, the leprosy bacteria already seems to know how stem cells work. And Rambukkana thinks that might be the key to understanding them ourselves.

Though the bacteria’s ability to make and manipulate stem cells has only been seen in the lab, it’s likely that it does so in the human body as well. They use the hijacked cells to move around the body. When its vehicle is parked in a cozy place, M. leprae co-opts the stem cell’s transformative powers to turn its ride into one of any number of human cells, everything from skin to muscle to bone. Once in place, the bacteria multiplies and spreads around the body, propagating the infection. 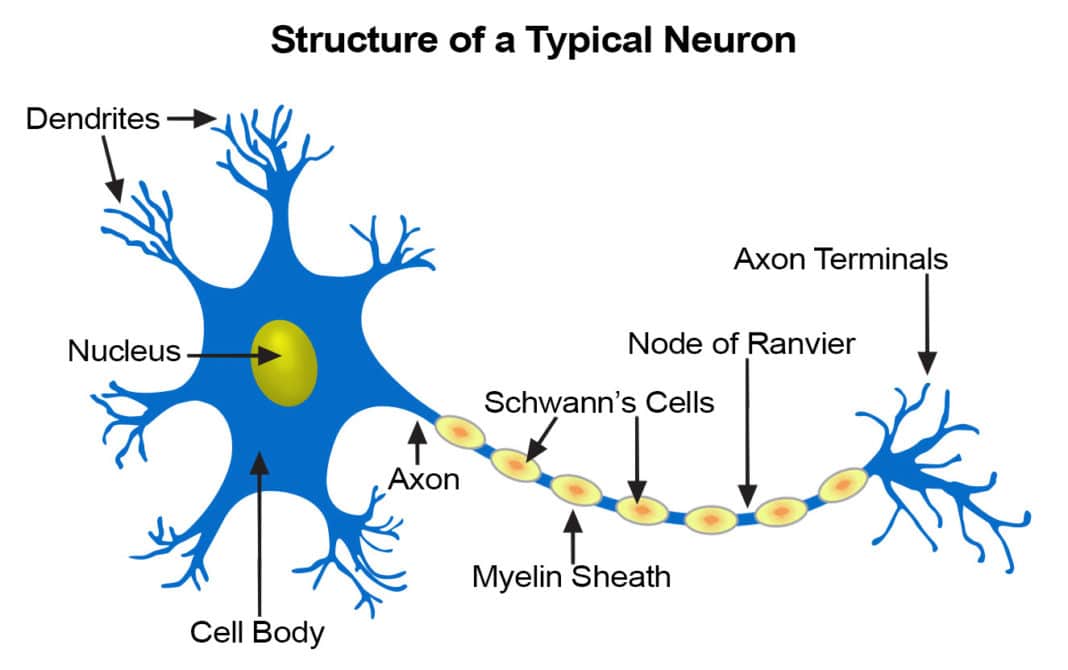 The structure of a typical neuron, including Schwann cells. (Credit: NIH)

The ability to control our cells in such an intimate manner is unique among pathogens as far as we know, and it’s helped leprosy, slow, picky and plucky as it is, to persist for thousands of years. Though today we can treat the disease with a combination of drugs, scientists still don’t fully understand the handiwork of this surpassingly crafty bacteria.

In the years since his discovery, Rambukkana has begun exploring the mechanisms M. leprae uses to reach inside our DNA and flip genetic switches with such ease, working essentially “gene by gene,” he says. He’s also applied his insight to a more practical problem: Diagnosing the disease before it can cause damage.

While cases in the U.S. number only about 200 a year, more than 200,000 are reported worldwide, mostly in India, Africa and Brazil. That number hasn’t changed for over two decades, and it’s a source of vexation for leprosy researchers.

Current tests for leprosy involve bacterial cultures from patient samples that must be performed in a lab. It’s expensive, and only works if the infection is fairly progressed. Finding a better tool to diagnose the disease is one of the top priorities for leprosy researchers worldwide, experts say.

Currently, by the time we can detect leprosy, damage has already been done. Knowing how the leprosy bacteria goes to work, however, means that we may be able to find biomarkers of its early activity in our cells, allowing for a diagnosis before symptoms appear. Rambukkana is currently in the early stages of a pilot program in Africa and Southeast Asia to test for these biomarkers, and he’s just applied for a large grant to support the project.

This could help prevent the permanent disfiguration the disease can cause once it’s taken hold — the very thing that turned lepers into outcasts in the not-so-distant past.

After infection, nerve damage begins to spread, and it can lead to permanent disability and disfigurement.

“People’s limbs do not fall off, but they may be insensitive so they’re very subject to secondary injury,” says Richard Truman, former head of the research branch of the National Hansen’s Disease Program. “Burns among patients, scaldings; I’ve seen patients who had huge ulcers on their knees because they were crawling on gravel.”

And though the disease can take years to reveal itself, once nerve damage begins, it can go extremely quickly.

“You can go from a nerve that has a little anesthesia to paralysis of a hand in ten days,” says David Scollard, a retired former director of the National Hansen’s Disease Program. “Understanding these reactions, what triggers them, what the mechanisms are and how we can better intervene are also major areas of research in almost every [leprosy research] group in the world.”

But Rambukkana sees applications for his research outside of leprosy, as well. He’s most excited about its potential to inform the field of nerve regeneration. Our peripheral nerves, aided by Schwann cells, can heal themselves after an injury — it’s why we don’t lose feeling in our skin every time we get a cut or scrape. Our central nervous system, including the spine, has no such ability — the cells don’t repair themselves.

What studying stem cells, and now the leprosy bacterium, has shown us is that our bodies are more pliable than we give them credit for. With a little nudging, cells morph back into stem cells, and then into potentially anything. And we already know that Schwann cells can patch broken nerves back together.

How exactly peripheral nerves repair themselves is unknown, but Rambukkana thinks M. leprae might be able to show us.

“They know how to maintain those stem cells for their own advantage,” he says. “So know we want to know how they do that and how we can translate that to the repair process where you have a very deep injury where you cannot repair the peripheral nerve.”

Stem cells of the kind M. leprae is able to create could conceivably graft severed nerves back together, even those our bodies are unable to heal. Rambukkana thinks the process could be extended even to the central nervous system as well, where reconfigured stem cells would wrap themselves around the severed ends of damaged nerves and bind them together once again.

The nerve-killer reborn as nerve-healer: It would be a fitting use for a bacteria that has manipulated our bodies with such dexterity for millennia.

“The bugs know every single bit of our cells, how it works,” Rambukkana says. “So why don’t we follow them.”