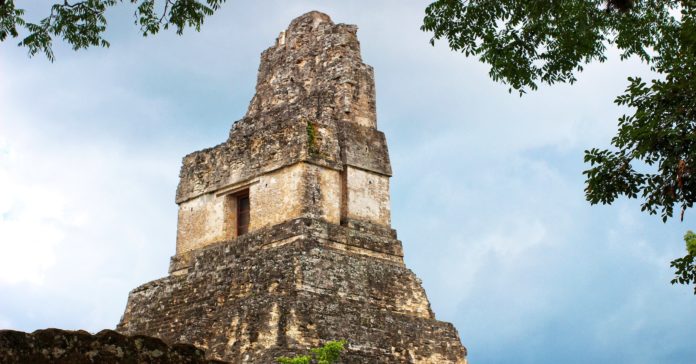 In July 2016, a group of archaeologists commissioned a small plane—along with special pilots—to fly over the thick jungle canopy in northern Guatemala, near the border with Mexico. Cruising well above the trees, the pilots combed the area, pointing three lasers at the ground that fired 300,000 pulses of light per second.

Over 12 days, the team used the lasers to create one of the largest-scale maps of Maya cities built between 1000 BC to 1500 AD. Although archaeologists have surveyed slivers of these metropolitan ruins in the past, the new maps showcase entire cities for the first time, putting the Maya’s formidable pyramids, city roads, and farming terraces in context. This view offers a wider perspective to archaeologists, who have historically been stuck analyzing individual structures at a time. In total, the plane mapped over 800 square miles, about two-thirds the size of Rhode Island. From this expansive data set, the researchers could estimate Maya demographics with better precision than before.

Compared to most archaeology work, this project was downright glamorous. Conventional mapping involves crews of people wading through thick jungle, whacking tangled branches and vines with a machete. Francisco Estrada-Belli, one of the archaeologists overseeing the project, says that in less than two weeks, the plane surveyed 10 times the area that Maya archaeologists have managed to map since the 1950s.

The site of Dos Torres, in the rugged karst hills between the cities of Tikal and Uaxactun.

The laser pulses create a topographic map similar to how a bat uses echolocation: The light shot down from the plane bounces off objects below, returning to hit a detector on the bottom of the plane. In Guatemala, only a small fraction of the pulses penetrate the canopy, but with the large number of pulses, enough light reaches the ground to create a map with one-meter resolution. Based on the timing and the intensity of the return pulses, the detector can map the contours below—hills, ditches, and moldering ruins.The technology, known as lidar, is also being installed on self-driving cars to help them avoid collisions.

Publishing in Science on Thursday, the archaeologists tally 61,480 structures on the map: canals and dams to irrigate crops and prevent floods; roads wider than a four-lane highway; terraces built on steep hillsides for planting crops. They found a fortress complex straddling two hills, next to a spring. “Our environmental scientists tell us that it’s the purest natural water source in the area, so the location is not by accident,” says archaeologist Thomas Garrison of Ithaca College, who directed the project with Estrada-Belli along with archaeologist Marcello Canuto of Tulane University.

The new maps help explain how the Maya organized themselves. A large wall dividing the city-states of El Zotz and Tikal, for example, supports the notion that the Maya weren’t a unified empire and lived instead in individual city-states that occasionally warred. “We knew the wall existed before the lidar, but we see it with stunning clarity and to a much greater extent than before,” says Garrison.

Using the number of structures, they estimated that on average, the cities contained 210 to 310 people per square mile—a denser population than that of Anchorage, Alaska, which according to the 2010 census, has about 170 people per square mile. This level of population density requires complex infrastructure to manage and distribute water, food, and other resources. “Seeing all this data makes me realize they were an even greater civilization than I thought,” says Estrada-Belli. “They were just as urbanized as the Mesopotamians, Chinese, or Romans.”

Exactly how the ancient Maya kept their densely populated society fed and hydrated remains a mystery. The farming infrastructure exposed on these maps can help decode their agricultural practices, says archaeologist Anabel Ford of the University of California, Santa Barbara, who was not involved with the work. Ford thinks these ancient methods could help modern-day farmers plant crops more sustainably. The Maya developed sophisticated farming techniques inside the jungle that do not involve plowing swaths of land, as European-style farmers tend to do. “I think we can start learning from these master forest gardeners,” says Ford.

But it’s still difficult to piece together the full story. “You’re looking at 2,500 years of that ancient society compressed into these images,” says Garrison. “The tricky thing to determine is what is occupied at what time.” Archaeologists have to combine a variety of data sources: not just the lidar maps and ground surveys, but the text inscribed on monuments that the society left behind. Ford works with descendants of the Maya living near the archaeological sites, some of whom still use traditional hunting and water-finding methods.

Archaeologists can make several types of images with lidar data. The left-most panel shows an area’s terrain. In the middle are the locations of human-made structures. The panel on the right shows archaeologists’ estimates of settlement density.

And because lidar isn’t perfect—it sometimes registers structures when it’s just bald ground—archaeologists still have to do traditional machete-facilitated mapping. “You have to get in on the ground and validate these points,” says Ford. Although lidar was invented in the 1960s to map clouds and atmospheric particles, archaeologists only started using it in the last decade. In 2009, archaeologist couple Diane and Arlen Chase of the University of Nevada, Las Vegas, were the first to use lidar to map a Maya city.

New map in hand, Garrison and his colleagues have already started confirming the structures they’ve found. Unexpectedly, the handiwork of a later civilization is helping their search. The lidar has actually revealed old trails—far younger than the Maya roads—built by the local logging industry. “They’re still overgrown with jungle,” says Garrison. “But it’s an easier trek because at one point they were flat, bulldozed roads.” The paths paved by a familiar culture, it turns out, lead directly to the mysteries of the Maya.