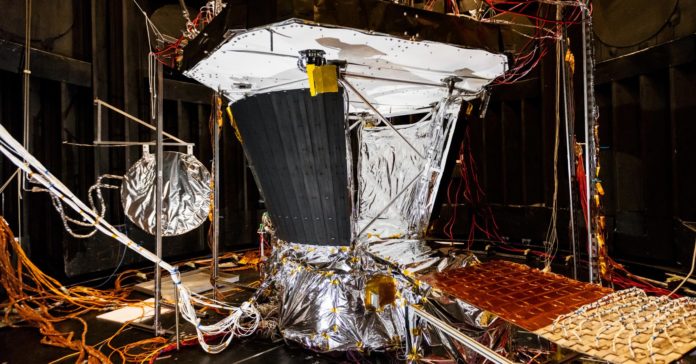 The Parker Solar Probe just earned the title of the fastest-moving manmade object. Launched by NASA this past August, this robotic spacecraft is currently very, very near the Sun, on its way to probe the outer corona of our local star.

OK, I know you have questions. Let me just jump right into it.

How fast is it going?

According to NASA, its current speed is 153,545 mph (or 68.6 kilometers per second). But really, that just means super fast. It’s nearly impossible to imagine something that fast when the fastest man-made stuff on Earth is perhaps a rail gun projectile at about 2.52 km/s. That means the Parker Solar Probe is traveling at a speed that is 27 times faster that the fastest thing we’ve got down here. Zoom fast.

What does this have to do with the speed of light?

Of course, light is even faster. Light has a speed of about 3 x 108 m/s (300,000 km/s). But why does that matter? You can’t get an object up to (or greater than) the speed of light. Why? Let’s start with an example. Suppose I have a force of 1 Newton and I push on an object at rest with a mass of 1 kg for 1 second (I’m using easy numbers). The momentum principle says that the momentum is the product of mass and velocity. Also, the force applied to an object tells us the rate of change of momentum. This means a 1 Newton force for 1 second gives a CHANGE in momentum of 1 kg*m/s (the change part is important).

This mostly works for super high speeds. The momentum principle still works as long as you use a better definition of momentum. It should look like this (in one dimension).

Just to be clear, there aren’t two models for momentum. You can always use the more complicated version of momentum. Try this: Calculate the momentum of a baseball with a mass of 0.142 kg and a speed of 35 m/s. First do this with the simple formula of mass times velocity and you get 497 kg*m/s. Now try it with the more complicated formula. Guess what? You get the same thing. I recommend using the simple formula whenever possible.

Why is this speed relative to the Sun?

You will probably see something about the speed of the Parker Solar Probe labeled as the heliocentric velocity. What’s the deal with that?

On Earth, this is rarely an issue. If you are driving your car at 55 mph, everyone understands that we are measuring this velocity with respect to the stationary ground. In fact, velocities only really make sense when measured relative to some reference frame. On the Earth, the obvious reference frame is the ground.

What if you didn’t want to use the Earth’s surface as a reference frame? Imagine a police officer pulling you over in your car and saying “oh hello, I clocked you at 67,055 mph.” That could indeed be true since the Earth isn’t stationary. In order to orbit the Sun, it has to travel with a speed of 67,000 mph to make it all the way around the Sun in one year. Yes, that’s fast (with respect to the Sun).

If you wanted to measure the speed of the Parker Solar Probe with respect to the Earth, you would have a tough time because you wouldn’t just have one value. As the probe moves closer to the Sun, the probe and the Earth can be moving in different directions. So even though the speed relative to the Sun could stay constant, its speed relative to the Earth would change since the Earth is turning in its orbit around the Sun.

If you really want to get crazy, you could use some other reference frame—like the galactic center. But let’s not get crazy.

How does the probe break its own speed record?

There are two key ideas here. The first is the gravitational force. This is an attractive force between the Sun and the probe. The magnitude of this force increases as the distance between them decreases. Oh, don’t worry—you can’t notice an increase in gravitational force as you move closer to the ground. Even if you moved a vertical distance of 1000 meters, this is insignificant compared to the size of the Earth with a radius of 6.37 million meters.

The other part of the problem is circular motion. Imagine the space probe traveling in a circular orbit (which isn’t actually true). In order for an object to move in a circle, there needs to be a force pulling it towards the center of the circle. The magnitude of this sideways force is proportional to the square of the object’s velocity, but inversely proportional to the radius of the circle. Putting the gravitational force and the required circular force together, I get the following expression for the orbital velocity.

In this expression, Ms is the mass of the Sun and G is the gravitational constant. But the main point is that the velocity increases as the radius decreases. It’s just physics.

If you want some fun physics homework questions, I have you covered. Here you go.