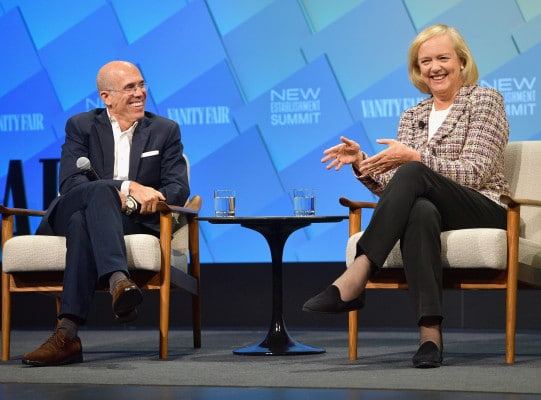 The name is Quibi, short for “quick bites,” per a note on its new website: “Something cool is coming from Hollywood and Silicon Valley — quick bites of captivating entertainment, created for mobile by the best talent, designed to fit perfectly into any moment of your day.”

The short-form video service, launching next year, will operate on a two-tiered subscription model similar to Hulu, per Deadline. Quibi is cooking up original content with Oscar-winning filmmaker Guillermo del Toro, Southpaw director Antoine Fuqua and Spider-Man director Sam Raimi, as well as Get Out producer Jason Blum and Van Toffler, the CEO of digital media production company Gunpowder & Sky, a spokesperson for the company confirmed to TechCrunch.

The Hollywood Reporter says the del Toro project “is a modern zombie story,” the Fuqua project is “a modern version of Dog Day Afternoon” and the Blum project, titled Wolves and Villagers, could be compared to Fatal Attraction.

Quibi, given Katzenberg and Whitman’s entertainment and business acumen, is expected to compete with the biggest players in the space, including Instagram, Netflix and Snap, which today announced Snap Originals. The new effort will have the ephemeral messaging service rolling out 12 new scripted shows on its app, from Keeping Up with the Kardashians creator Bunim/Murray, Friday Night Lights writer Carter Harris and more.

GizmoCrazed - December 14, 2018 0
San Francisco partially banned delivery robots because they obstructed pedestrians, so Postmates built one with eyes, turn signals and a mandate to yield. Serve...

Shake ‘n Charge – A New Way To Power Your Cellphone...