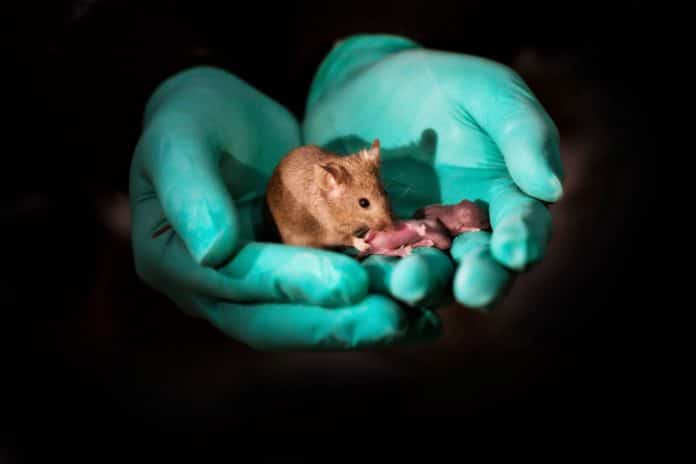 Chinese researchers have created healthy mice from two biological moms for the first time. The pups grew to adulthood and even went on to have normal offspring of their own, scientists announced today in the journal Cell Stem Cell. The researchers also produced mice with two dads, but the pups only survived a few days.

Although the reality of biological parenthood for same sex couples in humans is still a ways away, the breakthrough is revealing a path to fertility for same sex parents and showing scientists how to overcome the genetic roadblocks that normally prevent such reproduction from working.

“We revealed some of the most important [DNA] regions that hinder the development of mice with same sex parents,” said Wei Li, a molecular biologist at the Chinese Academy of Sciences in Beijing, who co-led the new study, in a statement.

Researchers have been asking why mammals need two opposite sex parents to have kids since the 1980s. Why not have bimaternal — two moms — or bipaternal (two dads) parents? As it is, many reptiles, fish and amphibians produce offspring without a partner. Earlier studies suggested animals need genetic material from both parents to develop normally because the mother’s DNA and father’s DNA compete against each other in their offspring. For example, dad’s DNA wants a kid to be big and beat rivals for food and mates, but mom’s DNA fights for a small child to ease giving birth.

According to one evolutionary hypothesis, parents’ sex cells resolve this difference by shutting off regions of their offspring’s DNA that would benefit their partner’s desires in a process called genomic imprinting. This way their progeny only have one active copy of an imprinted gene. When the imprinting process goes awry, however, kids end up with two active or inactive copies of these gene regions, which can lead to miscarriages, developmental defects and cancer.

To make mouse pups from same sex parents, researchers deleted some of these genetic imprinted regions in embryonic stem cells (ESCs) — cells that have just one set of chromosomes, like egg and sperm cells do. The scientists removed three imprinted regions from the DNA of a female ESC and injected them into the egg of a female partner to produce offspring from two moms. About 14 percent of the pups survived, grew to adulthood and were fertile, the scientists report.

To generate mouse pups from two male parents, the researchers had to delete seven imprinted regions. Although only 2.5 percent of the offspring made it to term and most did not survive more than a few days, the researchers find the results promising.

“This research shows us what’s possible,” said Li. “The defects in bimaternal mice [shown in previous research] can be eliminated and bipaternal reproduction barriers in mammals can also be crossed.”

Driverless shuttle in Las Vegas gets in fender bender within an...

GizmoCrazed - November 8, 2017 0
A driverless shuttle set free in downtown Las Vegas was involved in a minor accident less than an hour after it hit the streets,...

Loopholes and the 'Anti-Realism' of the Quantum World