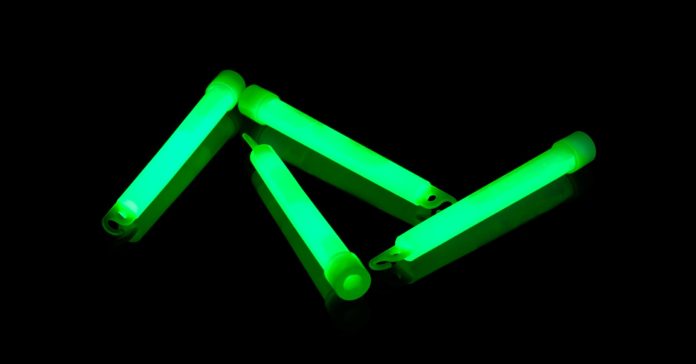 When I think of Halloween, I think of kids outside in the dark. Traditionally, this is the way it works. First, darkness makes everything just a little bit spookier and more Halloween-like. Second, the end of October used to be after the end of Daylight Savings Time such that it would get dark earlier. Of course this year, Daylight Savings Time doesn’t end until November 4.

However, let’s assume it’s dark. Kids running around in the dark on streets with cars can lead to bad things. Bad as in real bad, not bad as in “oh, I got this terrible candy.” But adults can help these kids be safer in the dark with two different items: the glow stick and the retroreflector. I’m going to go over the science of both these devices.

Please tell me you have played with one of these things. Just in case, I’ll describe a glow stick. It’s usually in some type of plastic container that is, as the name implies, stick-shaped. Inside the plastic are two chemicals separated by thin glass. When you crack the interior glass, the two chemicals mix and produce light. It’s super awesome. Kids love it. OK, I love it too. It just seems like magic.

Of course it’s not actually magic—it’s a chemical reaction. There are several parts of this reaction, so let’s look at each part.

First, the actual chemical reaction. In most cases, the two chemicals are hydrogen peroxide and phenyl oxalate ester—but if you aren’t familiar with these two chemicals it might as well be peanut butter and jelly. What happens when chemicals react? They change chemical bonds to produce two new chemicals. Although it takes energy to break the original chemical bonds (yes, it takes energy to BREAK bonds), you get even more energy when forming bonds for the new chemicals. So, in the end you get some energy from this reaction.

The next part is even more complicated—it is the tracking of this energy you get when new bonds form. What happens to that energy? It doesn’t just go away. Instead this energy is used to excite electrons to higher energy levels. Yes, electrons can only have certain energies in a bounded system like in an atom. This is one of the key ideas in quantum mechanics.

In most atoms, excited electrons just drop back down to lower energy levels with no problem—but not here. In this case, electrons move to higher energy levels that don’t really match up with transitions back to lower energy levels. It’s almost like a forbidden transition, but it’s not completely forbidden. Maybe this would be considered a “strongly discouraged” transition. Since the transition to a lower level isn’t simple, it can take the electrons quite a long time to make this jump down. But when they do, they release energy in the form of light. And that is where the light comes from in a glow stick.

Then why does the glow stick last for quite some time? Why doesn’t it just flash and then turn off? We’ve already seen the first reason—the “strongly discouraged” transitions makes the electrons stay in the excited state for awhile. But there is also the matter of the chemical reaction. The two chemicals in the glow stick have to mix and react to make the light. This doesn’t happen right away. The two substances have to evenly mix, and then two separate molecules have to find another unreacted molecule. The reaction takes time.

Since this glow stick thing is based on a chemical reaction, you can actually make it last longer—sort of. If you put the glow stick in the freezer after it starts glowing, its temperature will decrease. With a lower temperature, there will be less motion of the molecules in the liquid and they will interact at a slower rate. It won’t completely stop the reaction, but it will slow it enough that you should be able to use the glow stick again.

Of course, the opposite is also true. If you take a glow stick and put it in hot water, it will get brighter. By increasing the temperature of the chemicals, they will react at a faster rate and produce more light. Unfortunately, this means you will run out of products faster and the glow stick will die sooner. You’ll just have to grab another one out of the box.

There’s another way to increase visibility on a dark road that doesn’t require a chemical reaction. If you grab a pair of running shoes (even some running shorts and shirts), you will find some retroreflectors. When you shine a light on them, they look like they are lights themselves. But of course they aren’t lights.

To really understand retroreflectors, you need to first consider how humans see stuff. A common idea is that we see with some type of “vision” that comes out of our eyes. But our eyes don’t really shoot stuff out of them (unless you are Superman with his heat vision)—eyes are just passive devices. They detect light that comes into them, that’s all they do.

If you want to see that apple sitting on the table, you need light. Light has to hit the apple, reflect off of it and then enter your eye. If there is no light, you don’t see an apple.

OK, what about normal reflectors like a flat mirror? How does light interact with these (and what do they have to do with retroreflectors). Think about light as a beam (which it’s not really) coming out of something like a flashlight. When it interacts with a mirror, the light reflects off in such a way that the angle of light hitting the mirror is the same as the angle leaving the mirror. Here is diagram (note that you can not actually see the beam of light from the side).

In physics, we say “the angle of incidence is equal to the angle of reflection”—but you can just say the angles are the same if that makes you happy. But now imagine this. Suppose you are in a car at night and you point your headlights straight ahead. In the dark there is a child in front of you. The child is wearing a flat mirror because—I don’t know why, it’s Halloween and weird stuff happens. Here is how the light might travel.

The person in the car can’t see the kid. Light from the headlight goes out and reflects off the mirror. However, because of the angle the reflected light goes away from the car. If the light doesn’t get back into the human’s eye, the human sees nothing. Only in that one mirror orientation in which the mirror is mostly vertical does light get back into the driver’s eye. But wait! It’s even worse than that. Real life is in three dimensions. That means the left-right orientation of the mirror also has to be just right. It’s as though the child is not even there—stealth child. Side note: this is essentially how stealth planes work. They reflect radar waves away from the radar detector so that it isn’t “seen.”

Now for the retroreflector. These don’t work the same way as a shiny mirror. Just take a look at these running shoes in a dark room.

For most of the stuff in the room, light from the camera reflects off and away from the source. Since the light doesn’t go back to the camera, things just look dark. The retroreflector material on the shoe is different. This makes the light go straight back to the source. It’s so much reflected light from the retroreflector that it makes the shoe super bright.

OK, but how does it work? Actually, there are different ways to make a retroreflector. The simplest uses flat mirrors arranged at right angles to each other. Here is one I made with some small and cheap mirrors.

We can see how this works by drawing a diagram of a similar device in two dimensions. When light hits two of the mirrors, the combination of reflections sends light back to the location of the source.

That is your most basic retroreflector. But it’s sort of bulky and probably wouldn’t work too well with a kid’s Halloween costume. Fortunately, there is another design for a retroreflector—super tiny glass beads. When light enters these tiny glass balls, the light both bends due to refraction and reflects off the back wall of the sphere. This combination results in the light coming back out the same way it came in. For most of the retroreflective stuff you see, it’s made with these tiny glass beads (super tiny) and not the flat mirrors. That’s how those reflective shoes and traffic signs look so bright in the dark. You can buy some retroreflector material in the form of tape or on a vest. Throw this stuff on top of your kids costume and boom—they are now much more visible to cars. And they’re safer too (but not safe from eating too much candy).

Oh, you know what else is like a glass bead retroreflector? Eyes. Especially dog eyes. Here is a picture of our family dog in a dark room.

The light from the camera reflects off the dog’s eyes to come right back to the camera and make them appear super bright. If you were standing a little bit to the side of the light source, you wouldn’t see the bright eyes since all the light goes back to the source. It’s still a pretty cool effect and sometimes a little creepy. Perfect for Halloween.

The Hunt for Space Viruses

GizmoCrazed - January 23, 2018 0
Despite the fact that viruses are extremely pervasive on Earth, few studies have attempted to search for them in space. But that may soon...

The Real Problem With Voice Assistants Like Siri Is Your Brain

ABOUT US
Your future tech news site covering medical breakthroughs, virtual reality, robotics, space travel and green technology. Gizmocrazed works with many affiliates and therefore please consider all links to be affiliate related.
Contact us: [email protected]com
FOLLOW US
© Gizmocrazed - Your Future Tech News Source Privacy Policy We are a participant in the Amazon Services LLC Associates Program, an affiliate advertising program designed to provide a means for us to earn fees by linking to Amazon.com and affiliated sites.
We use cookies on our website to give you the most relevant experience by remembering your preferences and repeat visits. By clicking “Accept”, you consent to the use of ALL the cookies.
Cookie settingsACCEPT
Privacy & Cookies Policy