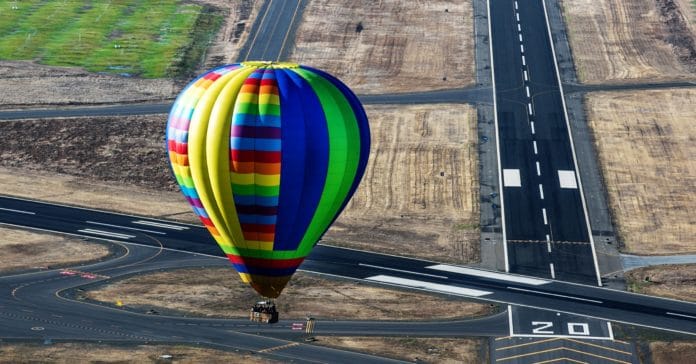 The art of estimations is pretty much a physicist’s bread and butter. We all love a good estimation problem. You might also hear these called a “back of the envelope” calculation, or a calculation on a napkin. The writing medium is meant to emphasize how little preparation goes into attacking the problem. The estimator can’t even take the time to find a clean sheet of paper.

But these calculations aren’t just for fun, they are also useful. One good example is a question that I just recently calculated: How big of a balloon would you need to lift a human?

Woah! Right there people might be saying: But wait! Is this a hot air balloon? Is this a hydrogen balloon? What material is it made of? The answer is “I don’t know, I don’t care.” The true power of the estimation problem is that you can pretty much ignore things that you don’t know. Yes, this takes some practice to figure out what is important and what isn’t. With that said, let me start off with my assumptions and estimations.

Let’s begin. In order for a human to be lifted by a balloon, the buoyancy force must be equal to the weight of the human. The buoyancy force for any object is equal to the gravitational force of the air (or water) displaced by that object. If I know the density of air (I do), I can solve for the volume of the balloon. Just to make the calculations simpler, I am going to use a cubical balloon instead of a spherical balloon—they are close enough to the same size that it shouldn’t matter.

With an air density of 1 kg/m3 and a human mass of around 90 kg, the volume of the balloon would have to be 90 cubic meters. Now I just need to take the cubed root of 90—without a calculator because that would spoil the process. OK, cube roots are tough, so let’s just get a rough value. I know that 5 cubed is 125 and 4 cubed is 64. I’ll just split the difference and say that the cubed root of 90 is 4.5. That means the cube is 4.5 meters across or about 12 feet. The balloon would have a diameter of about 12 feet.

OK, this answer is wrong. It’s wrong for lots of reasons. I didn’t use the correct shape of the balloon and I used the wrong value for the density of air (it’s really closer to 1.2 kg/m3). The biggest mistake is that I didn’t take into account the mass of the gas in the balloon and I didn’t include the mass of the balloon material. But being absolutely right isn’t the point of an estimation. With my estimation, I at least have a rough answer. I know that this is going to have to be bigger than the biggest party balloon you can find at a store. You aren’t going to be able to even grab a bunch of balloons from a performing clown and use that to float away. It’s got to be a BIG balloon. Bigger than 12 meters across.

See? Wasn’t that estimation fun? I’ll do another one, but let me first go over some of the key components of a great estimation.

You have to start with something. There has to be some estimate or physics principle that you start with. You can’t just estimate the mass of the moon if you don’t know anything about gravity or how long it takes for the moon to orbit the Earth. In the example above, I just happened to know the density of air because I’ve used it before. I also knew the relationship between buoyancy and the size of an object (Archimedes’ Principle). Without that, I would be pretty much stuck.

Approximate values are fine. Does it matter that I used an air density of 1.0 instead of 1.2 kg/m3? Not really. It’s true that an air density of 1.2 kg/m3 would give a smaller size of the balloon—but not significantly smaller. Remember that I’m not trying to calculate the exact size of the balloon. I just want to see if it’s a reasonable size. So, go ahead. Use a value of 10 N/kg for the gravitational field (instead of 9.8 N/kg). Use a human mass of 100 kg if that makes things easier. In the end, it won’t matter too much.

Estimation problems are sort of like a rough pencil sketch. It doesn’t have all the exact details of a photograph, but it’s enough to give you an idea of what’s going on.

Pick the simplest version of the problem. If you want to estimate the thermal radiation from a cow, you need to know the surface area of said cow. That’s complicated, so let’s make it simpler. What about a spherical cow? (classic physics joke) Even though cows aren’t actually spherical, they are close enough to being spherical for this problem. Also, the surface area of a sphere is pretty easy to calculate.

If you don’t know a value, at least get a reasonable range. But wait! What if I don’t know the density of air? How could I do the balloon problem? OK, let’s get started. What is some density value that you DO know? What about water? That has a density of 1000 kg/m3. Should air have a higher or lower density? Yes, lower. But how much lower? 100 kg/m33 seems too high still. What if you used 10 kg/m3? That’s pretty high—but it’s at least a start. Also, the density is clearly greater than 0 kg/m3. How about a range from 0.1-10 kg/m3. See, at least we have something to work with now.

Check your answer. If you are estimating the size of the balloon and your answer is 4.5 kilograms, it’s probably not correct. Units matter and you should make sure your answer has the correct units. There are other checks too. Did you get a negative value for the balloon diameter? You might want to recheck that estimation. But units are also your friend. If you don’t know the relationship between water flow rate and water speed, you can probably figure one out just by making sure the units work out.

How far do you have to fall to reach terminal velocity?

Here is another fun estimation problem (one that has actually come up more than once). Why would you ask this problem? Suppose I want to test something falling at terminal velocity. The obvious thing is to drop an object such that it moves at terminal velocity. But how high would that be dropped from? Let’s do it.

Here are my starting assumptions and estimates.

When an object falls from rest (in air), there are essentially two forces acting on it. There is the downward pull from the gravitational force, and then as the object increases in speed there is an upward air resistance force. As long as the gravitational force is greater than the air resistance force, the object will increase in speed as it moves down. Terminal velocity is that point in the motion where the two forces are balanced to make the object move at a constant velocity.

If there is no air resistance, the human will fall with a constant acceleration of 10 m/s2. I can now calculate the time it takes to get to a speed of 50 m/s. Since the object increases in speed by 10 m/s every second, it would take 5 seconds to reach this speed (using the definition of acceleration).

What about the distance though? The object isn’t moving at 50 m/s the whole time—but who cares? Let’s just assume that anyway. If it moves at a speed of 50 m/s for 5 seconds, it would travel a distance of 250 meters. So, this is a good starting answer. You need to drop it at LEAST from a height of 490 meters—probably even higher since it won’t actually be going that fast.

Python is the new envelope

I rarely calculate stuff on an envelope or scrap of paper (though I still do that sometimes). What I do instead, and it’s just as quick, is create a quick numerical calculation with python. This is especially true now that I can run python stuff on my smart phone. I can crank out something super quick—it’s still an estimation, but it’s a better estimation.

For the example of a falling human, I can now include the air resistance force and make a plot of velocity as a function of time. Here’s what I get (I will skip most of the details for now). Just press “play” to run the calculation and you can edit the code without breaking stuff.

Notice that by dropping from a height of 250 meters, the human doesn’t quite reach terminal velocity—but it’s a pretty nice estimate.

I can’t leave you without some more estimation questions. Here are some questions for you to play with. Have fun.