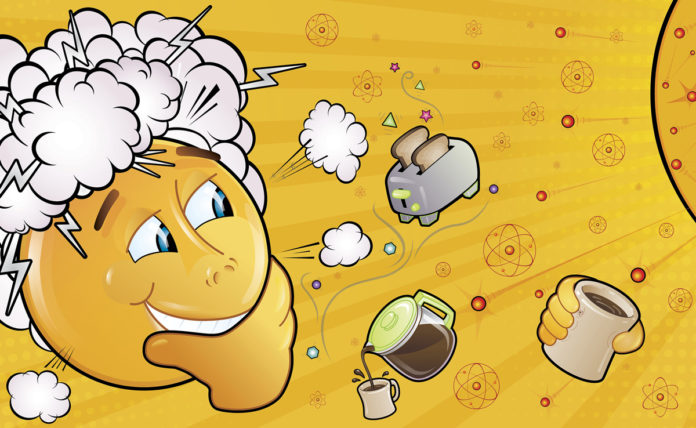 What happens next isn’t quite clear. We know the molecules bind to some of the 400 different receptors on the surface of the olfactory neurons; we don’t know exactly how that contact creates our sense of smell. Why is smell such a difficult sense to understand?

“In part, it’s the difficulty of setting up experiments to probe what’s going on inside the olfactory receptors of the nose,” says Andrew Horsfield, a materials scientist at Imperial College London.

The conventional explanation for how smell works seems straightforward: The receptors accept very specific shapes of molecules. They’re like locks, which can be opened only by the right keys. Each of the molecules escaping from your cup of joe, according to this model, fits into a particular set of receptors in your nose. The brain interprets the unique combination of receptors activated by their bound molecules as the smell of coffee. In other words, we smell the shapes of molecules.

But there’s a fundamental problem with the lock-and-key model: “You can have molecules of wildly different shape and composition, which all give you the same odor perception,” says Horsfield. It seems that something more than shape must be involved, but what?

A controversial alternative to the lock-and-key model suggests our sense of smell arises not just from the shape of molecules, but also from the manner in which those molecules vibrate. All molecules constantly jiggle with distinct tempos, based on their structure. Could our noses somehow detect differences in those vibrational frequencies? Luca Turin, a biophysicist at the Alexander Fleming Biomedical Sciences Research Center in Greece, believes they can.

Turin, who also happens to be one of the world’s leading perfume experts, was inspired by a vibrational theory of smell first proposed by chemist Malcolm Dyson in 1938. After Turin first caught scent of Dyson’s idea in the 1990s, he started looking for molecules that would allow him to test the theory. He hit upon sulfur compounds, which have a unique odor and a characteristic molecular vibration. Turin then needed to identify a completely unrelated compound — one with a different molecular shape than sulfur but possessing the same vibrational frequency — to see if it would smell anything like sulfur. Eventually, he found one, a molecule containing boron. And sure enough, it reeked of sulfur. “That’s when the penny dropped,” he says. “I thought, ‘This cannot be a coincidence.’ ”

Since that odoriferous eureka moment, Turin has been gathering experimental evidence to support the idea, collaborating with Horsfield to work out the theoretical details. Five years ago, when Turin and colleagues designed an experiment in which some of the hydrogen molecules in a musk-scented fragrance were replaced with deuterium — a variety of hydrogen containing an extra neutron — they found that people could smell the difference. Since hydrogen and deuterium have identical shapes but different vibrational frequencies, the results again suggested that our noses could indeed detect vibrations. Similar experiments with fruit flies complemented those results.

Turin’s idea remains contentious — his experimental data have divided the interdisciplinary community of olfactory researchers. But if he is right, and we do smell vibrations in addition to shapes, how do our noses manage the feat? Turin speculates that a quantum effect called tunneling might be involved.

In quantum mechanics, electrons and all other particles possess a dual nature; each is both a particle and a wave. This sometimes allows electrons to spread out and travel, or tunnel, through materials in ways that would be forbidden to particles under the rules of classical physics. The molecular vibrations of a scent molecule might provide the right jump down in energy that electrons need to tunnel from one part of an odor receptor to another. The tunneling rate would change with different molecules, triggering nerve impulses that create the perceptions of different smells in the brain.

Tucked away in our noses, then, might be a sophisticated electronic detector. How could our noses have evolved to take advantage of such quantum strangeness? “I think we underestimate the technology, so to speak, of life by a couple of orders of magnitude,” says Turin. “Four billion years of R&D with unlimited funding is a long time. And I don’t think this is the most amazing thing that life does.”

OK, so you’re quaffing your coffee, nearly awake. Your eyelids are gearing up for daytime mode, blinking, letting in a bit of the light that’s streaming through the window. As you sip your brew, ponder this: The particles of light warming your face and entering your eyes originated a million years ago in the center of the sun, around the time our not-quite-human ancestors started to use fire. The sun wouldn’t even be sending out those particles, named photons, if not for the same phenomenon that might underlie our sense of smell — quantum tunneling.

Some 93 million miles separate the sun and Earth, and it takes photons just over eight minutes to cover that distance. But the bulk of their journey occurs inside the sun, where a typical photon spends a million years trying to escape. Matter is so tightly packed at the center of our star — the hydrogen there is about 13 times denser than lead — that photons can travel only an infinitesimal fraction of a second before being absorbed by a hydrogen ion, which then spits the photon out for another soon-to-be-interrupted journey, ad infinitum. After about a billion trillion such interactions, a photon finally emerges from the surface of the sun, having zigged and zagged randomly for a thousand millennia.