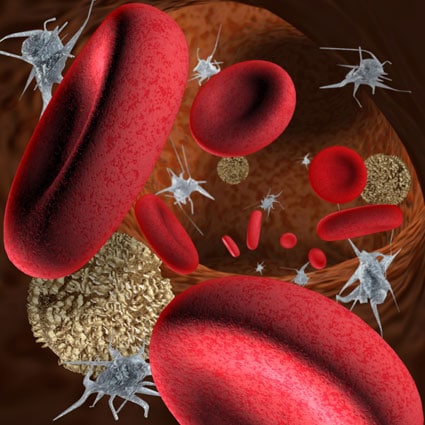 It may not be as miraculous as turning water into wine, or as wealth-generating as turning dirt into gold, but we still think this is a very cool trick: Researchers have transformed mature skin cells directly into mature blood cells. Crucially, this was done without reverting the cells to a flexible, “pluripotent” stage in which the cells can grow into any form.

The technique, described in Nature, could lead to lab-grown blood cells for transfusions and transplants for people with bone marrow diseases. Researchers think this new process may be safer than previous methods.

By skipping the pluripotent step, the researchers believe they have skirted the risk that the replacement cells might form dangerous tumors. [Los Angeles Times]

The research team, lead by Mickie Bhatia, coaxed the skin cells into becoming blood cells via a harmless virus that carried a gene called OCT4 into the cells–this reprogrammed the cells, turning their developmental clock back part of the way. Then the cells were incubated in a mixture of cell-stimulating proteins, called cytokines, which directed them on their new paths as either red blood cells, white blood cells, or platelets. The ability to grow a specific kind of blood cell has exciting clinical possibilities.

“If the patient has anaemia, they only need red blood cells, so we can change the recipe and make those. If we wanted to treat someone with a blood coagulation disorder, we change the recipe again and make platelets,” said Mickie Bhatia. [The Guardian]

Bypassing the pluripotent cell stage has another advantage besides reducing the risk of tumor growth. Previous transformations that guided cells through an embryonic-like stage produced fetal blood, rather than adult human blood. This fetal blood has a different type of hemoglobin than adult blood, and holds tighter to oxygen. The new process makes adult blood, which is much more useful.

Being able to take one type of cell and turn it into another would be a great boon to patient-specific stem cell therapies. For example, doctors could take the skin cells of a leukemia patient and use them to make new, non-cancerous blood cells, instead of requiring a bone marrow transplant from a donor.

And while we can’t be sure how the human body will react to these lab-engineered cells, in Bhatia’s tests the transmogrified cells acted exactly like normal blood cells. The researchers tested the cells on mice and found that they didn’t cause stem cell-related tumors, called teratomas; the cells were also incorporated successfully into the animals’ bone marrows.

The ultimate test would be transplanting the cells into humans, says Bhatia, but that isn’t on the cards — at least not yet. “The clinical side is going to be a lot of work,” he says. “At least from our estimation, this is the most encouraging result we’ve seen for using blood cells for cell-replacement therapy.” [Nature News]

One of the worries about using these types of lab-engineered cells is that we might not fully understand what they are, if they differ from natural cells, and how they’d behave in a human being.

In particular, epigenetic modifications — changes that modify gene expression without altering the DNA sequence — could differ between blood cells produced naturally and those created by direct conversion. “The journey from a zygote to a specialized blood cell is very long. The journey from a fibroblast to a blood cell in a petri dish may take a very different route,” says [stem cell biologist George] Daley. [Nature News]

Fastly, the content delivery network, files for an IPO

GizmoCrazed - April 20, 2019 0
Fastly, the content delivery network that’s raised $219 million in financing from investors (according to Crunchbase), is ready for its close up in the...

We've Got the Screen Time Debate All Wrong. Let's Fix It

Top 10 Most Anticipated Smartphones of 2014