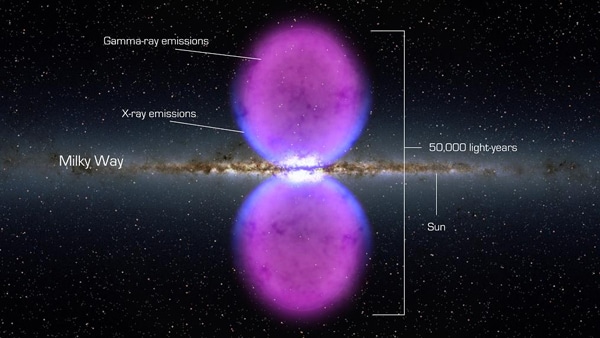 Those two purple lobes in the figure-eight shape are balloons of gamma ray energy that reach out 25,000 light years above and below the plane of the galaxy. Yet these huge structures have remained hidden from astronomers, until now.

Using NASA’s Fermi Gamma-Ray Space Telescope, Doug Finkbeiner and colleagues detected the bubbles after they managed to remove from their images an obstructing “fog” of gamma rays between here and there.

Researchers do not yet know what produced the bubbles, but the fact that they appear to have relatively sharp edges suggests that they were produced in a single event. Finkbeiner said that would have required the rapid release of energy equivalent to about 100,000 supernovae, or exploding stars. One possibility is that there was a burst of star formation in the center of the galaxy producing massive, short-lived stars that exploded and ejected a great deal of gas and dust over a few million years. [Los Angeles Times]

There is another possibility: The supermassive black hole at the center of the galaxy. While relatively quiet now, a furious period of gobbling up matter and blasting out jets of material in the past could have inflated Finkbeiner’s bubble.

It’s also possible, he said, that the best explanation could turn out to be a combination of both sources. Supernova explosions from a population of massive stars might have inflated the bubbles, while subsequent jet activity from the black hole might have set the bubbles aglow in gamma rays. [Science News]

The astronomers had hints that there might be something weird going on in the center of the galaxy when they began looking there with Fermi:

The scientists weren’t flying blind; previous studies by other astronomers using other instruments had found intriguing clues that a huge, previously unknown structure might be lurking near the Milky Way’s heart. “We were definitely looking for something,” Finkbeiner told reporters… “Some hints of this signal had been seen before, but not convincingly.” [MSNBC]

Now their task is to sort out the nature of this colossal find. The the black hole is the culprit, he says, this could be the first evidence ever seen of a supermassive black hole’s eruption.

Their study will soon be published in The Astrophysical Journal.