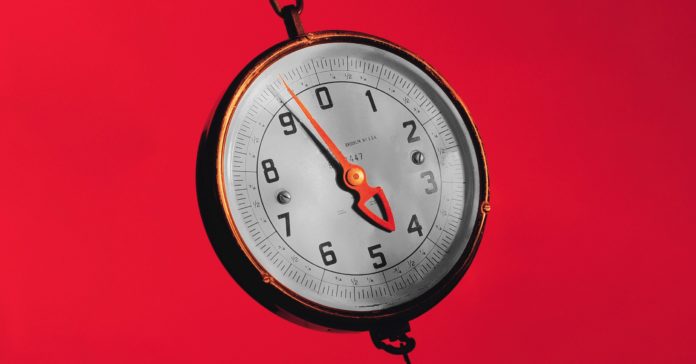 What’s the difference between weight and mass? Many people use these terms interchangeably, but that only works because all but a few of us live on Earth. If we start taking up residence in space colonies, on the Moon or on other planets, we’ll have to get more precise when we talk about how much stuff is in our stuff. So here’s a quick breakdown of weight versus mass:

Mass: If you could count up the number of protons, neutrons, and electrons in an object (which you probably can’t), this would be a measure of the mass. The mass is essentially “how much stuff” is in an object. Yes, I know that’s just a partial definition—but it’s good enough for now. Common units for mass are the kilogram and the gram. If you insist on using silly imperial units, the unit for mass is the slug (true).

Weight: There is a gravitational interaction between objects that have mass. If you consider an object interacting with the Earth, this force is called the weight. The unit for weight is the Newton (same as for any other force). OK, fine—the stupid pound is also a unit for weight.

Most humans on the surface of the Earth can get away with saying either “weight” or “mass” because they are proportional to each other. If you know the mass of something (m), then the weight (W) can be found as:

Measuring Mass With a Gravitational Balance

So, you want to find the mass of that stack of sticky notes? Simple, just put it on a scale and record the reading on the display. Like this.

That looks simple, right? It just gives you the mass. But hold on—this scale actually gives you the weight and then does a calculation to get the mass (assuming you are on Earth). If you take this scale to Mars, it will not give you the correct mass because there is a different gravitational field.

Actually, this scale does something very similar to this basic spring scale. It measures the force applied to it and then converts to a mass.

But wait! Sometimes this doesn’t even give you the weight. What if the scale is accelerating UP? In that case, the net force on the mass must be something other than zero. It must have a net upward force. Since the gravitational force doesn’t change (unless you change the Earth—please don’t do that), the spring scale has to pull harder. You can see this in slow motion.

Something similar would happen if you were standing on a scale in an elevator. When the elevator accelerates up, the scale would show a higher value—but your mass stays the same.

Measuring Mass With an Inertial Balance

There is another way to measure the mass—a method that doesn’t rely on the gravitational field. That means you can use this balance on Earth, or Mars, or even in deep space where the is no gravity (yes, there is gravity in low Earth orbit).

Let me introduce you to the inertial balance. It looks like this.

This particular model has a tray connected to two metal bands. When displaced to the side, the metal bands create a restoring force that leads to an oscillation—just like a mass on a spring. But what happens if you add MORE mass to the balance? In that case the device oscillates with a lower frequency. Yes, there is a connection between the time it takes to oscillate once (the period of oscillation) and the mass on the tray. The more mass you add, the longer it takes to oscillate.

But how can this be used to actually measure the mass instead of just watching something move back and forth for fun (though it is fun to watch). The first step is to collect some data. I need to see how the period of oscillation changes when I add more mass. I can get the period by putting a sonic motion detector (I’m using this one) on the side of the balance. This will then pick up the oscillation motion so that I can measure the period. I’m honestly surprised how well this works. Here is what the data looks like.

It’s not too difficult to get the time for one oscillation from this kind of data. Now I just need to measure the period of oscillation for different masses. If you want, you could just plot period vs. mass—but I already know that this would not be a linear function (because this is a simple harmonic oscillator). Instead, the square of the period should be proportional to the mass according to this model:

Now for the actual data. Here is my plot of the mass square of the period. Note: I am plotting the mass in grams—I’m not sure why I didn’t use kilograms.

The best fit line gives a slope of 7525.9 g/s2 and an intercept of -836.11 grams. The slope tells me how the mass should change with a change in the period (I know that might seem backwards—but there is a reason). The intercept tells me the effective mass of the oscillating tray (that holds the mass I add).

Suppose I want to measure an unknown mass. I just stick it on the inertial balance and oscillate it. After measuring the period, I can find the value of the unknown mass with this equation.

Boom. That’s it. You get the mass without a gravitational force. Of course this equation only works for THIS inertia balance. If you have one yourself, you need to first calibrate it with some known masses (just like I did here).

Oh, maybe you will like to see this video. It shows an actual astronaut measuring his weight on the International Space Station using an inertial balance. It’s real.