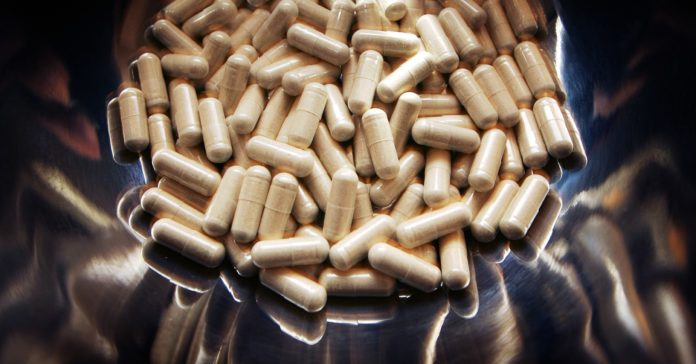 You know those sexual enhancement dietary supplements for sale at gas stations and markets across the country? Beware, they might actually be viagra. Or steroids. Or an antidepressant. Many supposed dietary supplements for weight loss, erectile dysfunction, and muscle building may contain actual pharmaceuticals—but you likely have no way of knowing what’s in them.

Between 2007 and 2016, the FDA issued warnings about unapproved pharmaceutical ingredients in 776 dietary supplements, according to a new report in JAMA Network Open. Of those, less than half received voluntary recalls. The authors compiled their data from the FDA’s own warning website. Known as the Tainted Products Marketed as Supplements List, it catalogs any time the FDA reports finding unapproved pharmaceutical ingredients in supplements. The hundreds of offending supplements the FDA found during that nine-year period traced back to 146 companies. These represent only a small fraction of the potentially hazardous supplements on the market.

The paper paints a damning picture of the growing supplement market, and should alarm anyone considering taking them, especially those for weight loss, muscle gain, or erectile dysfunction. And that’s a lot of people. More than half of US adults report taking dietary supplements, accounting for a $35 billion industry. A dietary supplement is defined by the FDA as any vitamin, enzyme, botanical, amino acid, or mineral that is not intended to cure or prevent a disease. A 2015 study found that supplement use sends 23,000 people to the ER each year in the US.

The paper published today is an analysis of what, if any, action the FDA has taken when it finds illegal substances in supplements. “The drug ingredients in these dietary supplements have the potential to cause serious adverse health effects owing to accidental misuse, overuse, or interaction with other medications, underlying health conditions, or other pharmaceuticals within the supplement,” write the authors, which include Jenna Tucker of the California Department of Food and Agriculture, Madhur Kumar of the Food and Drug Branch of the California Department of Public Health, and others. More than half of the supplements the FDA identified as dangerous are still for sale.

The authors report that the most common adulterants the FDA found in supplements were sildenafil (generic Viagra), sibutramine (generic Meridia for weight loss, which has been linked to increased risk of cardiovascular events and has been removed from the market in many countries), and synthetic steroids or steroid-like ingredients. They found that 20 percent of the products on the FDA’s Tainted list between 2007 and 2016 contained more than one unapproved ingredient. Even after receiving an FDA warning, some products continue to be sold. “This is alarming, especially considering that the FDA is only able to test a portion of products available on the market,” the report reads.

That gets at the heart of why this study matters so much, and where it fits into a growing body of work into the risks of supplements on store shelves today: The way the FDA regulates supplements doesn’t work.

“The FDA does not have control of this market,” says former principal deputy commissioner for the FDA Josh Sharfstein, who was not involved in the study. Sharfstein, who is now the vice dean for public health at Johns Hopkins, calls the study a good one, but cautions against blaming the FDA for its failures to sufficiently rein in the industry.

“Until the FDA has more authority to know what’s on the market,” he says, “there’s no way they are ever going to get control of it.”

Though the FDA is charged with regulating the supplement market, existing laws empower it to act only after supplements have hit store shelves. Unlike with prescription medications, dietary supplement makers are not required to apply for FDA approval or even register with the FDA before they sell their products. Experts say usually the FDA only investigates supplements after a consumer or physician alerts them to some kind of negative reaction the supplement has caused. “They have been set up with an impossible task of post-market surveillance of thousands upon thousands of products,” says Amy Eichner, Special Advisor on Drug Reference & Supplements at the US Anti-Doping Agency, where she works to warn athletes and military personal of the risks of dietary supplements. Eichner was not involved in the study.

Pieter Cohen, an internist at Cambridge Health Alliance and a leading expert in supplements, disagrees. He published a commentary along with today’s report calling the FDA out for dereliction of duty. “The agency’s failure to aggressively use all available tools to remove pharmaceutically adulterated supplements from commerce leaves consumers’ health at risk,” he writes. Those available tools include issuing a warning, asking for a voluntary recall, or requiring a mandatory recall.

The agency became empowered to issue mandatory recalls in 2011, but Tucker and her colleagues found that the FDA didn’t issue a single mandatory recall between then and 2016. (In fact, the agency has only ever issued one mandatory recall of a dietary supplement, in April of this year against an herbal supplement contaminated with salmonella.) That’s surprising, given the seriousness of some of the substances the agency has found in supplements. For example, Tucker and her co-authors report that selective serotonin reuptake inhibitors (SSRIs) have been found in sexual enhancement drugs, which is incredibly dangerous, as SSRIs can cause suicidal ideation in teenagers and young adults and interact with common painkillers.

The same is true for generic viagra, which belongs to a class of drugs called PDE5 inhibitors and can interact with the nitrates in common high-blood pressure medicine. The study notes that men who take these medications may avoid Viagra and turn to herbal supplements as a safer option, not realizing the over-the-counter supplement contains the pharmaceutical as well.

So why hasn’t the FDA issued mandatory recalls? It’s a matter of resource allocation and bureaucratic difficulty, says Cohen. “It is not trivial, but that’s their job. Yes, it might take a few weeks to do the paperwork, but hello, you’re a public health agency, and that’s your job,” Cohen says. “You can’t say, ‘Oh no, we don’t regulate supplements.’ The FDA is responsible for ensuring that supplements in the United States are safe.”

Right now, every time the agency looks into a certain supplement, “it’s a chemistry project,” Sharfstein says. FDA scientists test the supplements and send their reports to others in the FDA to take action on what they find. Today’s report found that of the 776 supplements these chemists found to be tainted with pharmaceuticals, the agency issued public warnings about 342 of them, news releases about 58, consumer updates about eight, warning letters directly to the firm about seven, and one Justice Department referral for investigation into possible criminal wrongdoing.

An additional 360 of these supplements were given a voluntary recall from their manufacturer at the FDA’s request. However, it’s unclear how many voluntary recalls the FDA actually requested, and whether some manufacturers then declined to follow through. In a statement, the FDA highlighted another hitch: Once it identifies that a supplement contains a pharmaceutical, it gets treated as a drug, which the FDA does not have the authority to recall mandatorily.

Cohen advocates for updating the Dietary Supplement Health and Education Act of 1994, which lays out how the FDA can monitor the industry. He and Sharfstein agree that one simple step would be to require firms to register supplements before they are sold. That way, the FDA would both know what was for sale, and be able to take supplements off of shelves if their makers failed to register them—removing the requirement for costly testing in at least some cases. Sharfstein notes there is some industry support for such a move, too.

“It’s crucial for consumers to realize how little the FDA can actually do to remove tainted products from the market or to prevent unethical companies from selling their products. Consumers have to be wary!” says Eichner.

The next time you see those supplements with nice-looking labels at the checkout line of your local market or gas station, think twice. Who knows what’s really in them.