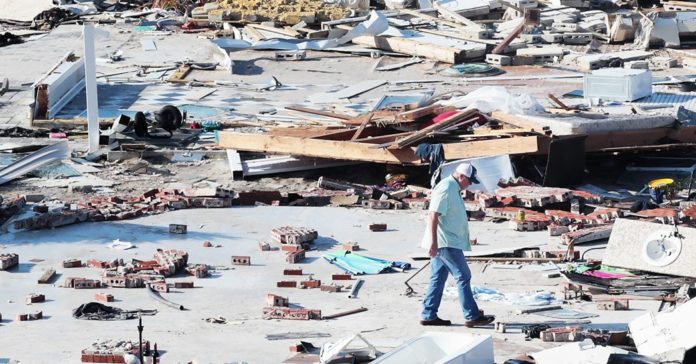 Last Wednesday, Hurricane Michael slammed into the Florida Panhandle at 155 miles per hour, flattening neighborhoods, turning subdivisions into rubble, and plunging the coast into darkness. On Friday, Trevor Lewis packed up two trucks with crowbars, chainsaws, sledgehammers, ropes, walkie talkies, and five other guys from Cocoa Beach, where he lives on the east side of the state. As night fell they began the drive up into the worst of the wreckage. By 4 am on Saturday they were responding to their first call for help.

Lewis leads a self-funded search-and-rescue unit made up of off-duty police officers, firefighters, and EMTs. They call themselves Salty Water Rescue Services, and most of them have special emergency training on the high-speed powerboat racing circuit off Cocoa Beach. They’re one of hundreds of volunteer crews that showed up post-Michael to help first responders overwhelmed by 911 calls.

They used as their guide a service called Crowdsource Rescue, or CSR, which showed on a map individuals who might need help. On one of Salty Water’s visits, the crew met a woman whose house had a gas leak, so Lewis called local authorities. “It’s an eerie feeling to dial that number thinking someone’s going to come and it goes straight to a busy signal,” he says. The woman’s family had used CSR to request a wellness check on their relative.

The idea behind CSR started out simple: collect calls for help posted on social media, geolocate them, and route volunteers to the distressed parties. Basically, Uber for emergencies. It was a simple enough concept that a pair of developers named Matthew Marchetti and Nate Larson hacked it together in about six soggy hours in Houston last August while Hurricane Harvey howled outside. They expected it to help out a few families in their rapidly flooding neighborhood. By the time the storm was over, Marchetti says at least 25,000 people had been reached using the web service.

Turns out, armies of spontaneous samaritans can get a lot more done if technology tells them where to go. “The volunteers are going to show up no matter what,” says Marchetti. “We’re just trying to empower them to find more people safely and more effectively.”

What began as a one-off charitable coding sprint has since evolved into a five-person emergency volunteer mission control center. In their day jobs at a real estate company, Marchetti and Larson built maps. And that’s basically what the first version of CSR was. But as more hurricanes rocked the US in quick succession in late 2017—first Irma, then Maria—the pair piled on new features as problems arose in real-time. “We would change something on the site while there were 60,000 people using it, and if they didn’t like it, they’d let us know,” says Marchetti. “We had no master plan. It was all just reactionary.”

In January, when the hurricane season had ended, they found time for a more thoughtful redesign. The latest version, released two weeks before Florence hit, includes a mobile app and new safeguards. It allows users to tag hazards such as downed power lines, washed-out roads, and fast-moving water. It also gives CSR the flexibility to block off any areas that emergency management officials have declared dangerous for civilians, so that volunteers without proper training can’t see aid requests in those areas. Those precautions are to prevent volunteers from winding up needing rescuing themselves.

That’s less of a concern for volunteers like Lewis’s Salty Water crew, who used CSR for the first time during Florence, but who are no strangers to treacherous waters. After that September storm swept through, seven of their guys drove to North Carolina with a flat-bottom boat and two tuned-up jet skis with rescue sleds on the back. Over the course of a few sleepless days they checked in on nearly 100 people, delivering supplies, relaying messages to loved ones, and helping the unluckiest few to safety, including about a dozen shivering pets.

On the long drive back to Cocoa Beach they decided to formally partner up with the crowdsource platform. But when Michael arrived two months later with its powerful Category 4 winds, Lewis and his teammates had used up most of their vacation time responding to Florence, so they could only stay four days. While in the Panhandle they found they had service through AT&T, which Lewis says was the only carrier with coverage, and they switched to walkie-talkies when they hit areas with outages. If they couldn’t relay their findings back to worried families directly, they’d take pictures or video to share using their phones later. He says that his team reached more than 300 people using the app on this trip.

Yet the rescue that sticks in his mind most vividly wasn’t coordinated by CSR. It came about just by chance. She was the neighbor of someone whose family had filed a wellness request; Lewis spotted her as they were preparing to move on to the next ticket, and he asked if she was alright. It soon became clear she wasn’t. A widow in her 80s and frail, she lived alone. There was almost no food or water in her house. A section of her roof had been ripped clear of its frame. An immigrant from Thailand, she had no family in the US. No one was looking for her. She had one friend in the city, but with no phone service she couldn’t call her. “It was heart wrenching,” says Lewis.

His team reached the friend and waited until she came to pick the old woman up. Then they patched her roof and ripped out her wet carpet, collected her valuables and put them in a safe place to dry. They filed a new CSR ticket so that there was a record. And so that someone follows up. But the incident showed one of the app’s biggest limitations—on its own it can’t locate missing people. Being homeless, phoneless, family-less, or Facebook-less can make dangerous storms even more deadly in the days and weeks after the worst weather has passed.

That’s one of the reasons Marchetti’s team has started to layer social vulnerability indices and flood zones onto its maps of areas where hurricanes are expected to hit. As landfall predictions firm up, CSR places Facebook ads for its app targeted at people living in the path of the storm. They start making calls to churches and local community organizations, trying to raise awareness of the resource. “We want to play this role of equalizer, to come in and serve as a stopgap,” he says. “Not having the ability or the funds to evacuate doesn’t mean you don’t deserve to be helped.”

Early Wednesday morning, CSR had more than 1,200 open tickets for people not yet verified as “safe.” But as more people got cell service and volunteers cleared a backlog of requests, that number dropped to 548 by the end of the day. Marchetti says that doesn’t necessarily mean that all of those people really are missing and presumed dead. They could be staying with other friends or relatives and unable to communicate. “But we are starting to hit that point in every disaster where that number becomes more and more representative of the real thing,” he says.

A more official number could emerge as soon as Thursday evening, when the Federal Emergency Management Agency expects to complete its search and rescue operations. The agency has 10 crews and a dozen cadaver-sniffing dogs scouring the destruction scattered across Bay, Gulf, and Jackson counties, according to FEMA spokesperson Ruben Brown, reached Wednesday at the agency’s interim operating facility in Tallahassee.

State officials have not provided a count of the people currently considered to be missing. The state’s division of emergency management has an online system where people can report missing individuals as well as the locations of people who are trapped or running out of medications and other supplies. But Florida officials did not respond to questions about how those lists are used to coordinate searches. The state’s website also links to a searchable American Red Cross registry where people can list themselves as “safe and well” for their loved ones to find.