A Faulty Booster Might Have Sabotaged a Soyuz Rocket Launch 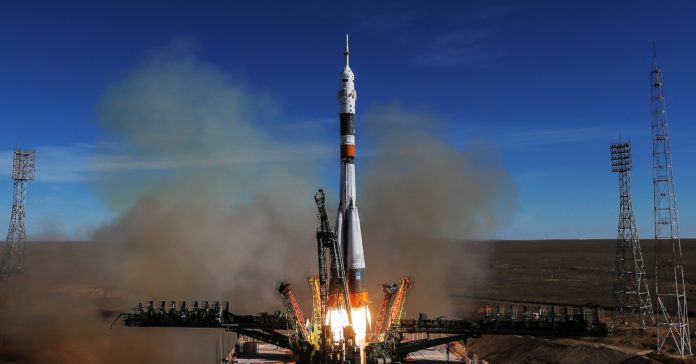 A NASA astronaut and a Russian cosmonaut were forced to make a dramatic landing after their ride to space, a Russian Soyuz rocket, failed minutes after takeoff. The incident caused the crew to initiate emergency abort procedures, landing a few hundred miles away from the launch site. Both Nick Hague and Alexey Ovchinin are safe.

The crew launched from the Baikonur Cosmodrome in Kazakhstan at 4:40 am ET and was scheduled to dock at the ISS six hours later. But about two minutes into the flight, the Soyuz suffered an unspecified failure and the onboard computer initiated the abort. “There was an issue with the booster from today’s launch,” a NASA spokesperson says. “The Soyuz capsule returned to Earth via a ballistic decent, which is a sharper angle of landing compared to normal.”

Dmitry Rogozin, head of Roscosmos (Russia’s space agency) has announced that all crew missions will be put on hold for the foreseeable future while the agency investigates the failure. The Russian state corporation, along with NASA are analyzing data to determine what caused the anomaly. “NASA Administrator Jim Bridenstine and the NASA team are monitoring the situation carefully,” the American space agency said in a statement following the mishap. “NASA is working closely with Roscosmos to ensure the safe return of the crew. Safety of the crew is the utmost priority for NASA. A thorough investigation into the cause of the incident will be conducted.”

A preliminary analysis by Roscosmos points to one of the Soyuz rocket’s four strap-on boosters. Russian space officials say the booster in question may have failed to properly separate, nicking the core stage, and triggering the emergency abort. They expect to release a more detailed report on October 20th.

This incident marks the first failure for the Russian human spaceflight program since 1983 when a Soyuz exploded on the launch pad. (The two Soviet cosmonauts on board, Vladimir Titov and Gennady Strekalov, were able to jettison to safety). But it’s also the second mishap in recent months for Russia’s trusty Soyuz. In August, the crew members onboard the space station discovered an air leak originating from one of the Soyuz capsules that was docked with the orbital outpost. The leak was eventually traced to a tiny hole in the Soyuz’s orbital module. Crew members were able to repair the ship and no one was in any danger, however, the leak has been a source of controversy as officials work to determine how the hole was made. Russian media outlets have tried to suggest on-orbit sabotage, implying that one of the crew members on board ISS intentionally drilled the hole. NASA has refuted those claims and Bridenstine is currently in Russia for the launch as well as to meet with Russian space officials.

Currently, the Russian Soyuz spacecraft is the only vehicle capable of ferrying crews to the ISS. In 2011, NASA’s fleet of space shuttles was retired, leaving the agency (and others around the world) dependent upon Russia for access to space. Commercial companies like SpaceX and Boeing are building NASA’s next generation space taxis, but they are not yet ready to fly. (The first flights of SpaceX’s Crew Dragon and Boeing’s Starliner crew capsules are expected to take off next year).

This failure raises serious questions about the future of the International Space Station, as the Soyuz spacecraft (and rocket) are the only means by which crews can reach it. It is not clear how long the Soyuz vehicle will be grounded, or how long the current crew—American astronaut Serena Auñón-Chancellor, German Commander Alexander Gerst, and Russian cosmonaut Sergey Prokopyev— can remain in orbit. They’re scheduled to come home on December 13, although it’s likely their mission will be extended.

Their scheduled replacements (cosmonaut Oleg Kononenko, Canadian astronaut David Saint-Jacques and NASA astronaut Anne McClain) were slated to launch on Dec. 20, but as of now their flight is uncertain pending the outcome of this investigation. NASA is still working out the plans going forward concerning both the crew and space station. While the agency can run the space station from the ground, agency officials prefer to have crew onboard, resulting in an extended stay in space for Auñón-Chancellor, Gerst, and Prokopyev. Supplies on board are ample so the crew is in good shape in terms of consumables.

Transportation, however, may be a bit trickier. Each Soyuz spacecraft is only certified to stay docked to the space station for approximately 200 days. With their lifeboat’s shelf life set to expire in January 2019, the crew could either be stranded or forced to abandon the space station. Both the rocket and the spacecraft to be used for the next launch are nearly ready to fly, however, so it’s entirely possible that the next Soyuz could launch without people on board, serving as an extra lifeboat to fetch the current crew.

Updated 10-12-18, 5:20 pm EDT: The story was changed to include the first results of a Roscosmos investigation.