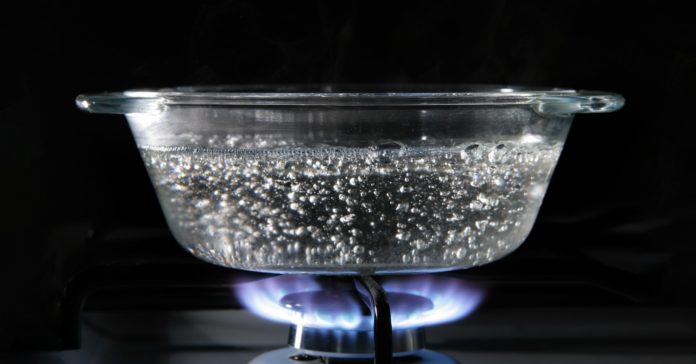 Sometimes it’s right on the box of rice mix—the high altitude version of cooking instructions. Usually this means that your rice will have to cook a little bit longer if you are in Denver or at the top of Mount Everest. Of course that’s just a joke. No one cooks rice at the top of Everest. But why are the instructions even different? Why does it matter where you cook? The answer has to do with boiling water.

Go ask some people on the street about the boiling temperature of water. Some might say 212°F or even better 100°C—but that’s not always true. As you increase your altitude above sea level, the boiling point of water decreases by about 1°F for every 500 feet increase. That means your water in Denver is going to be 203°F and this will have an impact on your cooking.

There are many awesome things about water—one interesting “factoid” is that on the surface of the Earth you can find water in all three phases: solid (we call this ice), liquid water, and as a gas. We call the gas phase of water “water vapor.”

You might think that you need to boil liquid water to create water vapor—but you don’t. You just need some liquid water at room temperature (or any temperature). Picture a glass of water. If you could zoom in with super vision (not actually possible), you would see that this water is made of a bunch of molecules—water molecules. Although these molecules are themselves made of three atoms (two hydrogens and one oxygen), let’s just think of them as tiny balls.

These tiny water balls are moving around in the water but stay fairly close to their ball neighbors. This motion isn’t due to currents in the water, instead this is thermal motion. Imagine these tiny balls jiggling around in a giant collection of balls. The hotter the water, the greater the motion of these water balls. But wait! The speeds of the water particles aren’t all the same. Although there is an average ball speed, some are going faster and some are going slower. It’s just like the height of a group of adult humans. There is an average height, but everyone is not the same. Some people are VERY tall, but that’s just a small fraction of the total group.

You can see evidence of this water vapor in a closed container by looking at the water that condenses on the walls. Here is a picture.

Now for boiling water. Here is what water looks like when you get it to 100°C (in slow motion). Yes, I know you have seen this before. but it’s still cool.

Look at the bubbles and answer the following question (this one is a classic):

What are the bubbles in the boiling water made of?

Ask your friends. Ask your enemies. Ask yourself.

Are the bubbles made of air? What about some hydrogen and some oxygen? No. The bubbles are water vapor—they are small pockets of water in the gas phase. I mean, they couldn’t be air. Where would this air come from? The only option is that the bubbles are made of water vapor.

So, what is happening to make these boiling bubbles of water vapor? It’s all about temperature and vapor pressure. As the temperature of the water increases, the average speed of the water particles also increases. At some point, water molecules have enough energy to push back other water molecules in the liquid phase to form a bubble. But you have to have the water hot enough so that the particles are moving fast enough.

What about that external pressure? That depends on two things. First, the water itself. In order for the water to not collapse, the deeper water must have a higher pressure. So, the water pressure depends on the depth, the density of water and the gravitational field (since it’s due to the weight of the water). For a typical glass of water, the pressure at 2 centimeters below the surface is only a 0.2 percent increase over the atmospheric pressure. And that is the second thing that contributes to the total pressure—the atmosphere. The atmosphere also pushes down on the surface of the liquid to increase the pressure in the liquid.

Now for the fun part. What if I decreased the atmospheric pressure pushing on some liquid water? This would reduce the pressure in the liquid also. If I reduce this pressure enough, I can bring it down to the same level as the vapor pressure. Boom. Now the water particles have enough energy to form their tiny little boiling bubbles—without the need to increase the temperature.

I can even get water to boil at room temperature. Yes, you need a vacuum pump and a strong container to get this to work—but you can do it.

Notice that I hold onto the boiling water flask just to prove that it’s not hot. Trust me. Oh wait. You don’t have to trust me. You can do this on your own. You just need one of these large plastic syringes. Get the syringe and put some water in it with very little air. Now seal up the end and heat up the water just a little bit. Here you can see my version.

I used hot glue and a rubber stopper (along with a LEGO piece) to seal the hole. The syringe was then heated to about 42°C (a little over 100°F). Now I can pull the plunger out to decrease the pressure in the liquid and induce boiling.

It’s pretty tough to pull the plunger back to decrease the pressure—but you can do it. Oh, why heat the water up? Well, I can’t get a perfect vacuum by pulling the plunger, so I need a little boiling help by starting the water at a higher temperature.

This is exactly what’s going on when you cook your rice at high altitude. Well, not exactly the same—there’s not a human pulling back on a giant plunger that holds the air on Earth. The Earth’s gravitational field does that for you.

The Side Effects of Solar Geoengineering Could Be Minimal

GizmoCrazed - March 19, 2019 0
It sounds like a drastic course of action: inject stuff high into Earth’s atmosphere to reflect a little sunlight and help counteract global warming....

Human-Powered Helicopter ‘Gamera II’ Back To The Skies