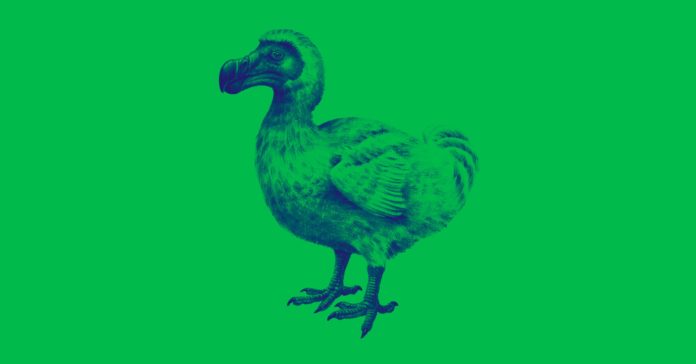 Dodos. Western black rhinoceros. Tasmanian tigers. Bennett’s seaweed. The list of extinct animal and plant species goes on and on. It’s a tragedy that’s only getting worse, we’re told, but honestly, I never cared that much.

Recently, though, I’ve found myself sympathizing with those fighting against species extinction. The reason? I’m a computer scientist interested in algorithms.

Algorithms and species extinction have more in common than you’d think. Like a recipe, an algorithm describes a strategy to solve a problem. Similarly, all biological systems must solve problems to survive. Whether it’s a plant determining the right trajectory to grow, an immune system securing the body against an invading pathogen, or a bloodhound’s nose tracking the faint scent of a prey across miles, the ability to solve these problems is directly related to the likelihood that the organism survives and passes on its genes. If one organism discovers a more successful strategy—it learns to solve the problem faster, or more robustly, or using fewer resources—then that organism will more likely pass on those “tricks” to the next generation. So goes natural selection, slowly optimizing strategies as a species dances its way through time.

What’s left after billions of years of this process? A collection of species, each loaded with an arsenal of algorithms ready to tackle diverse problems, such as building adaptive transportation networks, securing systems from outside attackers, and tracking adversaries. Every distinct environment offers different challenges that must be overcome to survive. As a result, the basic algorithms these species use have been fine-tuned to work in diverse settings.

Computer scientists are now seriously studying these “algorithms in nature” to generate new solutions to basic engineering problems. The past few decades have seen tremendous advances in our ability to probe, measure, and manipulate biological systems, which has generated unprecedented views on how biological systems actually work. In addition, computing devices have become radically more mobile, energy-efficient, and adaptive—all features that are hallmarks of biological systems. The convergence of computer science and biology has the potential to yield new perspectives on fundamental biological problems.

Recently, my lab at the Salk Institute has been studying how the tiny brain of a fruit fly solves a human technology problem called “similarity search.” For example, when we say, “that band sounds like Nirvana,” or “that fruit smells like an orange,” our brains are performing a similarity search to find previously experienced items that are comparable to a new item, such as a song or an odor. This search allows us to generalize behaviors learned from prior experiences to guide our behavior to new experiences.

Every technological company today faces a similar challenge. Platforms like YouTube, Spotify, and Amazon search through billions of videos, songs, and products to offer suggestions based on your previous habits. By studying the olfactory circuit responsible for processing odors in the fruit fly brain, we found that the fly uses a variant of a common computer science algorithm for performing similarity searches. The fly, however, demonstrated three new computational tricks that we were able to translate to improve the overall effectiveness of similarity searches.

We have also been extending this line of thinking into plant biology. Plant architectures can be viewed as transportation networks used to shuttle nutrients, such as water, sugars, and carbohydrates, amongst different organs. Like a subway system, plants need to build a network that allows nutrients to be transported quickly while balancing the cost of building and maintaining the network. Using high-resolution 3D scanning measurements, we found that plants developed mechanisms to make optimal trade-offs between these two competing functions. Insights from plants could reveal new strategies for building better infrastructure networks, especially those that need to adapt to damage or changing user demands.

When a species goes extinct—be it orca whales in the Pacific or rare frogs in the Amazon—what we are fundamentally losing are algorithms. As the rate of extinction increases, how many elegant algorithms to long-standing or future scientific problems will vanish with them?

The next time a species is lost because of questionable human behavior, rather than considering only the ecological, economic, and emotional consequences, we should also mourn the algorithmic secrets that were lost. Mother Nature was the author of the first book ever written on algorithm design. Every time a species goes extinct, we lose another chapter.

Here are the first videos of the Apple Watch Series 4,...

GizmoCrazed - September 12, 2018 0
Apple just announced the latest iPhone and Apple Watch and these are the first promo videos for the devices. As usual, Jony Ive, Apple’s...

This Brooklyn man makes massive robotic costumes out of junk