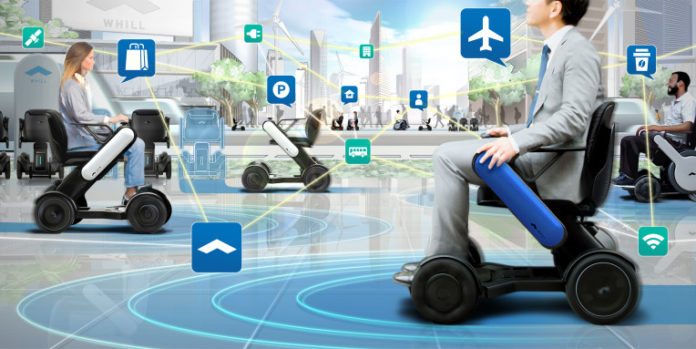 This brings WHILL’s total funding so far to about $80 million. Founded in Tokyo in 2012, WHILL plans to open a branch in the European Union and enter 10 new European countries. It also plans to start working with partners on developing autonomous capabilities for its mobility devices, senior marketing manager Jeff Yoshioka told TechCrunch. The company will build its own sensors and cameras to use in its “mobility as a service” program, which allows users to control vehicles and call customer service through a mobile app.

One of WHILL’s biggest projects is developing an autonomous personal mobility device system for airports. Yoshioka says that an estimated 20 million people request wheelchairs in U.S. airports each year. This means they need to wait for an airline employee to bring a wheelchair to them and then push them from check-in to their gates. At the same time, it doesn’t give users a lot of flexibility.

The system that WHILL has in mind, on the other hand, would allow individuals to use an app to summon a mobility device over to them. Then they can go wherever they want — coffee shops, restrooms, shops — before heading to the gate without an assistant. Once they are done with the device, it will return to a docking station on its own. WHILL has already begun testing a similar program at Tokyo International Airport in partnership with Panasonic.

Yoshioka says WHILL will most likely pursue distribution partnerships with U.S. airlines, which are responsible for supplying and maintaining the wheelchair systems in American airports, and airports to build the necessary infrastructure.

Along with airports, WHILL wants to bring its technology to other large venues, including shopping malls and sports arenas, as well as create a system for last-mile transportation. Yoshioka notes that “there are already a lot of companies out there like LimeBike and MoBike that offer bikes and electric scooters, but there’s nothing out there for people with disabilities who can’t use those devices.”

Instead, many rely on Ubers or public transportation even for short distances. Like the airport system, WHILL’s last-mile sidewalk system will use autonomous electric vehicles that can be called to users with an app. It faces unique challenges, however, because WHILL’s devices are larger and more expensive than bikes or electric scooters, so the company needs to find safe places to dock them that are still accessible to people with limited mobility. Yoshioka says WHILL likely will focus on partnering with commercial properties to create indoor docking stations.

WHILL’s largest market is still Japan, where it has between 4,000 to 5,000 resellers. In its home market, WHILL’s devices are subsidized by the government and also available for rent. In the U.S., however, many customers need to purchase devices out-of-pocket. To make their products more accessible, WHILL launched the less expensive Model Ci (called the Model C in Europe and Japan) earlier this year. While there is still plenty of room for innovation in the wheelchair market, the Model Ci and other WHILL products compete with devices like the iBot, which can climb stairs, and the Trackchair, designed for off-road use. WHILL’s current products can’t climb stairs, but they do have the advantage of being designed for both indoor and outdoor use, giving users more flexibility, says Yoshioka.

The company also expects demand for its products to grow thanks to a rapidly aging world population, citing statistics that show there are expected to be more than 2.1 billion people over the age of 60 by 2050, up from about 900 million last year.

“We don’t necessarily see [the other companies] as direct competitors. They definitely do impact sales, because people might want something that climbs stairs instead of having better outdoor capabilities, but I think overall it’s very beneficial for the industry,” Yoshioka adds. “As a company that’s trying to disrupt the industry, it’s nice to have them around because it pushes the industry forward and opens eyes for other manufacturers.”

The impact of technology on communication

GizmoCrazed - January 17, 2017 0
Wearable technology has quickly gone from The Terminator movie set to quickly becoming a normal part of our everyday life. How far into the future...

Planet-Saving Robots? Robert Downey Jr. Is on to Something