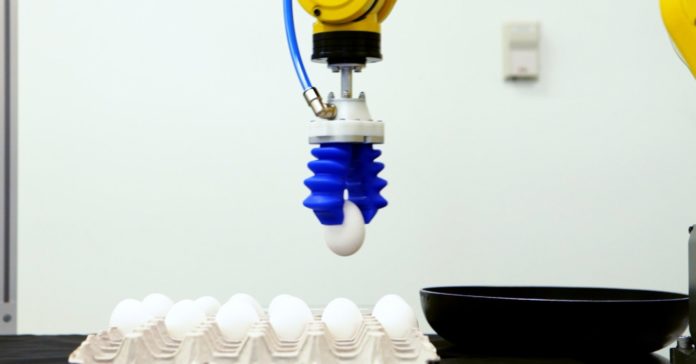 The octopus is unique among animals in that it can essentially turn itself into liquid, Terminator style. Get yourself a 600-pound octopus and leave it unsupervised and the thing will squeeze itself into a quarter-sized tube and melt its way to freedom. And its manipulation superpowers are legendary—cram it into a jar and it’ll unscrew its way out. So it goes when you’ve got no bones.

And loosey-goosey octopuses can teach us a thing or two about robots. An company called Soft Robotics has developed an inflatable, cephalopod-inspired gripper made of pliable polymer fingers. Pump in air and the gripper rapidly inflates, grasping its target—pump the air back out and the fingers return to their original shape, dropping the object. These deformable fingers make the device adaptable to a wide range of shapes, from eggs to raw meat to pens. And to accomplish this hand feat, Soft Robotics takes a simple approach to robotic manipulation, letting the squishy material do the work as opposed to painstakingly teaching a traditional robotic hand how to grip each object it encounters.

Soft Robotics’ work is important because manipulation continues to be a challenge for the field of robotics. In a world built for and by humans, the machines have a hell of a time getting a grip on things—good luck exactly replicating the dexterity of the human hand. It used to be that you had to program a robot to manipulate every new object it came across, but that’s changing thanks to machine learning techniques. You can, for instance, make a robotic hand try lots and lots of ways to manipulate a cube in simulation until it learns the best grip on its own. Then it ports that knowledge into a real-world artificial hand. That is time-consuming, however, and it’s difficult to perfectly transition to the physical hand.

Being soft and squishy, though, means the hand can more or less envelop the object it’s trying to grip, as opposed to finely manipulating the thing. This Baymax approach comes in particularly handy in, say, a facility that processes food, picking produce off a conveyor belt and placing it in boxes. Soft Robotics says its hand can pick-and-place 133 cherry tomatoes a minute—that’s two a second. A human might only manage 100 picks. Thanks to machine vision, the robot can see what it’s manipulating, although it doesn’t have an idea of the nature of what it’s manipulating.

“Instead of having to program for every object, or having the robot learn every object, the robot doesn’t really need to know what it’s picking up, because the soft robotics are going to real-time conform,” says Carl Vause, the CEO of Soft Robotics. So, more Baymax enveloping an object than Arnold wrapping his metal fingers around someone’s neck.

Soft grippers will toughen up, though, as the material science improves. Researchers in Belgium, for instance, have developed a soft robotic hand with skin that heals when you apply heat. These sorts of materials are soft robotics’ advantage, since you can use different materials for different applications. “If you’re trying to do something very rigid and very robust, you could use industrial urethanes,” says Vause. “If you want to pick up very soft things, you can use medical grade polymers.”

Inflatable hands may be versatile, but for now they are not especially strong: Air pressure just can’t supply the same power as a traditional electric motor. Soft Robotics says its strongest gripper in production can heft 13 pounds, which is fine for lifting bags of flour and such. But if you want a robot to hoist car doors into place on an assembly line, you’ll want to go electric, not pneumatic. Researchers are making progress on the strength issue, though. A team at MIT has given soft robots 3-D printed origami skeletons that expand and contract like accordions, which allows them to heft 1,000 times their own weight.

They may not have super-strength, but soft grippers’ ability to automatically comply to different shapes is a huge benefit. “It cuts down on the number of sensors you have to have in your system,” says Eric Acome, who studies soft robotics at the University of Colorado Boulder. “If you don’t have to worry about, ‘Am I going to squeeze this strawberry too hard?’” That makes developing these kinds of robots far less complicated than trying to give a traditional robot hand the power to feel.

But if these things are going to escape controlled environments like warehouses and enter our chaotic homes, they’ll need to be more sensitive. “That’s where softness alone, that compliance, won’t get you far enough,” Nicholas Kellaris, a roboticist at the University of Colorado Boulder. “What it will do is still give you more tolerance to error—you won’t shatter a glass by bumping into it a little too hard.”

It’s a world that’s shaping up to be more Baymax, less Terminator. And I think we can all get our hands around that.

Model How Light Reflects Off a Mirror With Python

GizmoCrazed - March 28, 2018 0
Ever wonder how a mirror works? If you want to find the path that light takes when reflecting off a surface, you could use...

Entrepreneurs warn that Robots will take over both low-wage jobs and...

Tips for Securing your Home before a Vacation