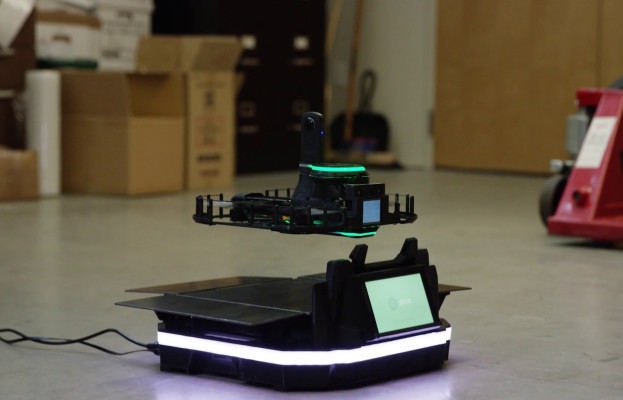 Knowing what’s going on in your warehouses and facilities is of course critical to many industries, but regular inspections take time, money, and personnel. Why not use drones? Vtrus uses computer vision to let a compact drone not just safely navigate indoor environments but create detailed 3D maps of them for inspectors and workers to consult, autonomously and in real time.

Vtrus showed off its hardware platform — currently a prototype — and its proprietary SLAM (simultaneous location and mapping) software at TechCrunch Disrupt SF as a Startup Battlefield Wildcard company.

There are already some drone-based services for the likes of security and exterior imaging, but Vtrus CTO Jonathan Lenoff told me that those are only practical because they operate with a large margin for error. If you’re searching for open doors or intruders beyond the fence, it doesn’t matter if you’re at 25 feet up or 26. But inside a warehouse or production line every inch counts and imaging has to be carried out at a much finer scale.

As a result, dangerous and tedious inspections, such as checking the wiring on lighting or looking for rust under an elevated walkway, have to be done by people. Vtrus wouldn’t put those people out of work, but it might take them out of danger.

The drone, called the ABI Zero for now, is equipped with a suite of sensors, from ordinary RGB cameras to 360 ones and a structured-light depth sensor. As soon as it takes off, it begins mapping its environment in great detail: it takes in 300,000 depth points 30 times per second, combining that with its other cameras to produce a detailed map of its surroundings.

It uses this information to get around, of course, but the data is also streamed over wi-fi in real time to the base station and Vtrus’s own cloud service, through which operators and inspectors can access it.

The SLAM technique they use was developed in-house; CEO Renato Moreno built and sold a company (to Facebook/Oculus) using some of the principles, but improvements to imaging and processing power have made it possible to do it faster and in greater detail than before. Not to mention on a drone that’s flying around an indoor space full of people and valuable inventory.

On a full charge, ABI can fly for about 10 minutes. That doesn’t sound very impressive, but the important thing isn’t staying aloft for a long time — few drones can do that to begin with — but how quickly it can get back up there. That’s where the special docking and charging mechanism comes in.

The Vtrus drone lives on and returns to a little box, which when a tapped-out craft touches down, sets off a patented high-speed charging process. It’s contact-based, not wireless, and happens automatically. The drone can then get back in the air perhaps half an hour or so later, meaning the craft can actually be in the air for as much as six hours a day total.

Probably anyone who has had to inspect or maintain any kind of building or space bigger than a studio apartment can see the value in getting frequent, high-precision updates on everything in that space, from storage shelving to heavy machinery. You’d put in an ABI for every X square feet depending on what you need it to do; they can access each other’s data and combine it as well.

This frequency and the detail which which the drone can inspect and navigate means maintenance can become proactive rather than reactive — you see rust on a pipe or a hot spot on a machine during the drone’s hourly pass rather than days later when the part fails. And if you don’t have an expert on site, the full 3D map and even manual drone control can be handed over to your HVAC guy or union rep.

You can see lots more examples of ABI in action at the Vtrus website. Way too many to embed here.

Lenoff, Moreno, and third co-founder Carlos Sanchez, who brings the industrial expertise to the mix, explained that their secret sauce is really the software — the drone itself is pretty much off the shelf stuff right now, tweaked to their requirements. (The base is an original creation, of course.)

But the software is all custom built to handle not just high-resolution 3D mapping in real time but the means to stream and record it as well. They’ve hired experts to build those systems as well — the 6-person team already sounds like a powerhouse.

The whole operation is self-funded right now, and the team is seeking investment. But that doesn’t mean they’re idle: they’re working with major companies already and operating a “pilotless” program (get it?). The team has been traveling the country visiting facilities, showing how the system works, and collecting feedback and requests. It’s hard to imagine they won’t have big clients soon.

Colorado Students to Speak with NASA Astronaut on Space Station

GizmoCrazed - November 16, 2016 0
Students in Wheat Ridge, Colorado, will have the opportunity to speak with a NASA astronaut currently living and working aboard the International Space Station...

The Plan to Save the Rhino With a Cervix-Navigating Robot

Top 10 Most Anticipated Smartphones of 2014

WeWork takes meat off the menu as part of environmental policy...