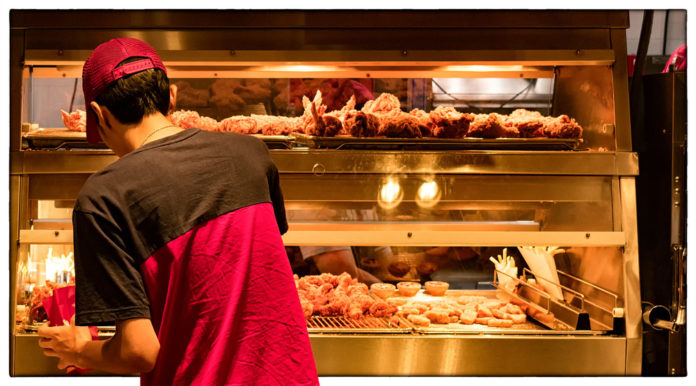 A new study shows that low meat diets, like those followed by pescatarians and vegetarians, use far less water than meat-rich diets. (Credit: Seika Chujo/shutterstock)

The world’s freshwater is in short supply thanks in part to a ballooning global population that uses thousands of liters of water everyday to produce foodstuffs from oil and vegetables to meat, dairy and alcohol. Now researchers have discovered new evidence that a healthy diet, like those followed by pescatarians and vegetarians, also uses significantly less water.

“It is a win-win situation,” said Davy Vanham, a water management researcher at the Joint Research Center of the European Commission in Ispra, Italy, who led the new work.

Around the globe, water shortages impact more than 40 percent of the population, according to the United Nations. And the scarcity of freshwater in lakes, streams, ground water and soil moisture, all endanger food security. Researchers say competition for limited resource pools will grow as the world’s population does and people’s lifestyles change. Researchers say that we’ll have to make changes to our food production chain in order to preserve the life-giving liquid.

With these concerns in mind, Vanham and his colleagues assessed how much freshwater it takes to produce the foods people eat in three European countries. This so-called “water footprint” takes into account direct and indirect water use along the food supply chain.

“Our aim was… to produce the geographically most detailed water footprint related to food assessment ever made, for both existing diets and diet scenarios,” Vanham said.

The researchers used detailed national food surveys to find out what people in France, Germany and the United Kingdom eat on a daily basis. All together they evaluated the diets of nearly 44,000 of the smallest regions, districts and municipalities in the countries. Since socioeconomic factors influence what people eat, the researchers also incorporated age, gender, education level and income into their assessment.

When Vanham and team broke down their analysis by regional food preferences, they discovered local tastes affected water consumption. The water footprint for alcoholic beverages was lower for people in Germany and the United Kingdom than France for example because the French drink more wine (as opposed to beer in the U.K. and Germany). It takes more water to make wine than it does to make beer.

Socioeconomic factors also made a difference. In London’s boroughs, highly educated people drink more wine on average than people with less education, and so their water footprints were correspondingly higher.

A Healthy Diet Is Better For You And The Planet

Since obesity is on an upward trend and people currently eat more than the recommended amounts of sugars, fats and dairy products, the researchers then asked how healthy people’s diets compare to their nation’s dietary guidelines. The scientists wondered whether shifting to healthier foods might benefit not only their waistlines but also reduce water consumption.

They found that switching to a healthier diet reduces water consumption for food production by as much as 35 percent. A pescatarian or vegetarian diet change saw even larger savings of up to 55 percent, the team reports today in Nature Sustainability.

“When people would shift to these healthy diets, it would increase their own health, but also save a lot of water resources,” said Vanham. “In addition, there is the potential to save a lot of money for healthcare systems.”

Aquaman Trailer: The Physics of His Leap from the Water

GizmoCrazed - November 29, 2018 0
OK, I'm a little excited for the new Aquaman movie. Sure, I've been let down by DC movies before—but we also got Wonder Woman...

How Much Energy Can You Cram Into Your Halloween Candy?