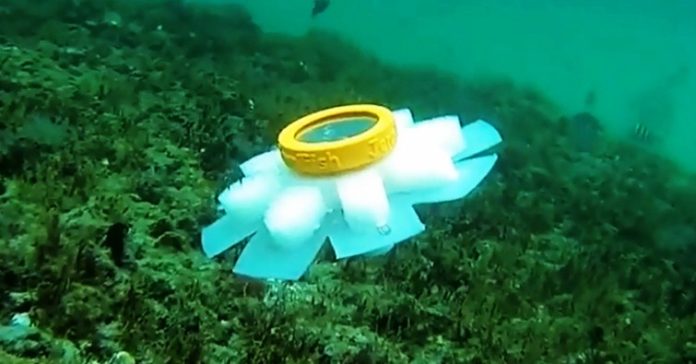 Jellyfish float through the ocean like drones of the sea. Their simple nature makes them a natural muse for robot engineers building devices that can squeeze through tight spaces, check the ocean’s health, and eventually, explore the human body.

This week, a team at Florida Atlantic University unveiled a new eight-inch wide robo-jellyfish built to monitor marine life and harsh underwater habitats. It’s not the first attempt to automate one of these 500 million year-old creatures. Researchers at Virginia Tech, for example, built a massive 170-pound mechanical one that swims with a parachute-like apparatus. A group at Harvard and CalTech devised a tiny experimental jellyfish made of rat tissue and silicone to understand how jellyfish tissues contract and expand like human heart muscle.

Instead of hard plastic and wires, the Florida researchers used soft components for both the body and tentacles. “It’s not going to damage delicate ecosystems,” says Erik Engeberg, associate professor of ocean and mechanical engineering at FAU. “It can be deployed in sensitive areas like the Great Barrier Reef.”

Engeberg and colleagues have already tested five robot jellyfish—each one made using a rubber of a different hardness, to test how it affects propulsion—on underwater reefs off the south Florida coast. The researchers built them in the shape of the moon jellyfish (Aurelia aurita) during its larval stage. The robots can swim against currents just like the organisms that inspired them.

“It can steer from side to side with its tentacles and has some maneuverability within the ocean current,” says Engberg, an author on a new paper describing the device in the journal Bioinspiration & Biomimicry.

The jellyfish steer using two pumps to inflate the eight tentacles. The pumps create a circuit of water that produces a swimming stroke. When the pumps switch off, the water flows back into the ocean and the tentacles relax. The pumps are powered by a 3-volt battery running a small electronic circuit board, which also run temperature and salinity sensors.

The Florida robo-jelly can also swim through holes smaller than its body size. The team tested a few of them in an aquarium and then again in a swimming pool, making them swim through holes cut out of a sheet of plexiglas. It’s just a beginning, but that skill may be useful for exploring seafloor crevasses, oil rigs or moored oceanographic instruments.

In the past decade, academic labs have built many kinds of bio-inspired robots to better and more efficiently explore the ocean. Robo-fish, tuna, octopus, turtles and even a manta ray have all taken a spin around a water tank. Most of them are experimental designs that last only as long as their grant funding. Ocean science still doesn’t attract the kind of money or commercial dollars that exist for drone technology or space probes.

Still, researchers say they are learning by building these bio-inspired soft robots. Some end up as dead ends that are good for a paper or two. Others may lead to new ways to deliver drugs or check for tumors, according to Kevin Kit Palmer, a professor of bioengineering and applied physics at Harvard who developed the tissue-engineered jellyfish in 2012. Palmer’s work focuses on building hybrid devices made out of both living tissue and electronic parts that could one day be used to replace organs or serve as a testbed for drugs. “Having a robot with a soft arm is advantageous,” he said. “You want something to squeeze in, pick it up or get it out of there, whether you are talking about tumors or bombs.”

FAU’s Engeberg also works on new kinds of prosthetic limbs, and sometimes his projects cross-pollinate. He said his team is now working on an upgraded robot jellyfish that can descend several hundred feet below the surface and use sonar to navigate its own slow journey through the sea. You probably won’t see one of them on your next trip to the beach, but the ideas behind these ocean bots could show up anywhere.