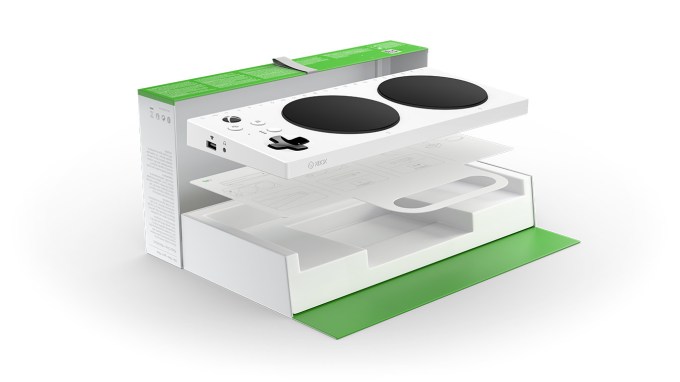 First introduced in May, the Xbox Adaptive Controller can now be purchased online for $99.99. To create the controller, Microsoft collaborated with gamers with disabilities and limited mobility, as well as partners from several organizations, including the AbleGamers Charity, the Cerebral Palsy Foundation, Special Effect and Warfighter Engaged.

According to Microsoft, the Xbox Adaptive Controller project first took root in 2014 when one of its engineers spotted a custom gaming controller made by Warfighter Engaged, a non-profit that provides gaming devices for wounded and disabled veterans. During several of Microsoft’s hackathons, teams of employees began working on gaming devices for people with limited mobility, which in turn gave momentum to the development of the Xbox Adaptive Controller.

In its announcement, the V&A said it added the Xbox Adaptive Controller to its collection because “as the first adaptive controller designed and manufactured at large-scale by a leading technology company, it represents a landmark moment in videogame play, and demonstrates how design can be harnessed to encourage inclusively and access.”

The Xbox Adaptive Controller features two large buttons that can be programmed to fit its user’s needs, as well as 19 jacks and two USB ports that are spread out in a single line on the back of the device to make them easier to access. Symbols embossed along the back of the controller’s top help identify ports so gamers don’t have to turn it around or lift it up to find the one they need, while grooves serve as guidelines to help them plug in devices. Based on gamer feedback, Microsoft moved controls including the D Pad to the side of the device and put the A and B buttons closer together, so users can easily move between them with one hand.

The controller slopes down toward the front, enabling gamers to slide their hands onto it without having to lift them (and also makes it easier to control with feet) and has rounded edges to reduce the change of injury if it’s dropped on a foot. The Xbox Adaptive Controller was designed to rest comfortably in laps and also has three threaded inserts so it can be mounted with hardware to wheelchairs, lap boards or desks.

In terms of visual design, the Xbox Adaptive Controller is sleek and unobtrusive, since Microsoft heard from many gamers with limited mobility that they dislike using adaptive devices because they often look like toys. The company’s attention to detail also extends into the controller’s packaging, which is very easy to unbox because gamers told Microsoft that they are often forced to open boxes and other product packages with their teeth.