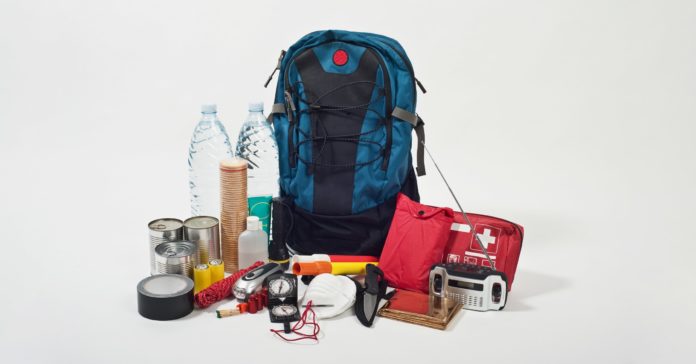 Helicopters got to Wilmington, North Carolina, after a day of isolation; Hurricane Florence made landfall there, and the city, with one foot in the Atlantic and the other in the Cape Fear River, soon became an island. Its main roads underwater, Wilmington went without help until boats and choppers reached it with medical supplies, water, and food.

But it only took a day. According to the federal government, that’s actually pretty fast. Since the terrorist attacks of September 11, 2001—or at least since Hurricane Katrina hit New Orleans in 2005—the government has urged all of us, every individual, to be ready to go without help for at least three days in the wake of a disaster. You’re supposed to have kits in your cars and at home … maybe not the shopping cart from The Road, but just, like, be ready, OK? And now with Florence a waning threat but with fires and storms an apparently permanent part of Earth’s changed climate (and earthquakes, volcanoes, and terror always possible), the rules seem to be shifting a bit again. The new message: Be ready for 14 days on your own. Two weeks.

That’s a lot of supplies to buy and store—especially when the whole idea of home disaster preparedness kits is based much more in conventional wisdom than actual data. On the other hand, one might save your life. Good luck, everyone!

Recommendations for what’s supposed to go in these kits vary, but basically it’s a gallon of water per person per day and food, too, plus medicines, blankets and sleeping bags, maybe a tent, extra eyeglasses, lots of batteries, something to make light with, something to make fire with, maybe a hand-cranked radio.

All that makes sense. “It is not realistic, even in developed countries, to expect that the governmental infrastructure will be able to reach everyone within hours,” says Daniel Barnett, a disaster preparedness researcher at the Johns Hopkins Bloomberg School of Public Health. “Individuals need to have self-sustainability.” At minimum, you want to take as much pressure off of first responders as possible so they can triage effectively, attending to life-threatening situations while you chill in your backyard, if you’re able. That’s part of supporting what disaster pros call “resiliency,” the ability of a community or region to withstand whatever it gets punched with. It’s supposed to be interpersonal, too—neighbor to neighbor.

The problem with all that is, as Barnett and his colleagues showed in a 2012 review of the literature, almost no one actually builds kits. Well, perhaps fewer than half overall, but results varied wildly by region—as low as 7.4 percent in northeastern Alabama, much higher in post-Katrina New Orleans (85 percent of survey respondents had a disaster plan, but only 22 percent had a kit). Partially that’s out of inertia, laziness, fear—all the things that keep everyone from preparing for anything. But also, older, better-educated, wealthier, home-ownier people were more likely to have kits than younger, less-educated, poorer people. And of course, poorer people are the ones who get hurt the most by disasters in the first place.

A couple of years ago things got even more complicated. In 2016 the Washington Military Department, essentially that state’s National Guard, ran an exercise called Cascadia Rising. The idea was to simulate a response to an earthquake and subsequent tsunami emanating from the Cascadia Subduction Zone off the Pacific Northwest, subject of a much-read New Yorker article from the previous year. “Cascadia Rising was a massive eye-opener,” says Karina Shagren, spokesperson for the Washington Military Department. “We realized there would be pockets of communities that won’t receive help for several days, if not several weeks.” Washington’s coastal communities would lose the bridges that connect them to the rest of the world. They’d have to wait for help by air or sea.

So Washington and Oregon upped their estimates. People should expect to be on their own not for at least three days but at least two full weeks.

That messaging is now at the core of Washington’s emergency preparedness. It has also trickled out nationally, albeit somewhat confusingly. A FEMA spokesperson says the agency now recommends “at least a three-day supply of food, water, and medications,” but more water if it’s really hot, and “up to two weeks of supplies when preparing for catastrophic events.” A representative from the Centers for Disease Control and Prevention, on point in case of pandemics or bioterror attacks, says his agency’s recommendations echo FEMA’s. Tom Heneghan, senior manager for Disaster Program Development at the American Red Cross (practically a quasi-governmental entity in times of disaster), says households and businesses should have three days of supplies in case people have to evacuate but two weeks’ worth if people are sheltering in place.

Risk communications is hard, and disasters are complicated, but all that advice is frustrating. Three days is the go-bag, maybe? As a child of earthquake country I would venture that a two-week supply list for the aftermath of a Big One looks very different from the bioweapon pandemic checklist. The road to prepper madness is paved with surplus MREs, tarps, and duct tape. (I suggest gaffer tape, actually—DM me.)

For a family of four, a gallon of water per person per day for 14 days is 56 gallons of water, an industrial-sized drum. It’s also more than 100 full meals, or a pantry full of cans, beef jerky, rice, and so on. It’s a full complement of camping equipment. And it all has to be somewhere accessible and, ideally, not vulnerable to whatever kinds of disasters you’re expecting. And none of this stuff is free. “There are massive issues of access and equity in terms of how people can stockpile even a couple of days’ worth of supplies, much less 14 or more,” says Anita Chandra, a disaster researcher at RAND. “When you’re talking about disasters, you’re talking about events that disproportionately affect those with the least access to assets.” (Where Washington state is concerned, Shagren says they suggest people build their stashes a little bit at a time, as much as they can.)

Here’s the worst part: Nobody knows if disaster preparedness kits actually help. They might! You should still have a kit, if you can do it. “Institutions are worried they can’t get to people in time … particularly people who live below or close to the poverty line,” Chandra says. “It’s coming from a concern about the fact that the resources are very mismatched against need.” Which is to say, government agencies don’t have the money to send a fire truck to every house after an earthquake or hurricane. People have to be able to help themselves.

But at the same time, a risk of this change in message is that it suggests that the government is abrogating its responsibilities, either out of incompetence or because of some kind of rugged-individualism message. “What matters in terms of disaster response and recovery is community connections and social cohesion,” Chandra says. “The negative side of that conversation has been a twisting of that idea into, ‘go take care of yourself.’ That was never the intention.”

Rugged individualization has failed once before. During the Cold War, the US government tried to get people to build fallout shelters in their backyards. “Social vulnerability just didn’t get factored in. Nobody built them. It didn’t ring true for people even then,” says Scott Knowles, a disaster researcher at Drexel University. “By the mid-1960s, civil defense officials had figured that out, so they started hoarding stuff in the commons.” Cities designated or built communal fallout shelters that were stocked with beds and supplies. “If we really want people to survive, we can’t rely on them to hoard all that stuff in their homes. It’s not rational. So maybe this is something for the government,” Knowles says.

Is there stuff you should probably definitely have access to in your home? Sure. Copies of personal identification documents. Prescription medications. A good whistle. Lightsticks. Water purification tech. A crowbar. (The time you need a crowbar is the time you really, really need a crowbar.)

But the hard truth is, local communities can and probably should be filling gaps that government advice suggests are the responsibilities of individuals. The central insight that sparked full-fledged research into the sociology of disasters and their response was that people tend to help each other in times of distress. Disaster researchers and risk managers don’t want to jeopardize that covenant. Yet that’s the deeper risk of telling people they’re on the hook to defend their own castles for two weeks after a disaster.

Yes, fill those jerry cans in the basement with water and get your solar cells ready, but when the disaster hits, share the water. Offer your neighbors a charge. Maybe they’ll trade a bite of jerky. But it’s not wrong to look toward government—local if not regional and national—for aid. Building cities in ways that don’t exacerbate hazards is a start, like less impermeable surfacing, fewer buildings in the wildland-urban interface, and reined-in coastal and watershed development. Helping the most vulnerable people in a community now has humanitarian value, but also economic value—they’ll be safe during and after a disaster, won’t need rescuing, and can help with recovery.

That’s the real lesson for putting together a disaster kit. It’s there for whoever needs it. Someday that might be you; someday it might be your neighbors. Until the helicopters come, we’re all in this together.

Are Diplomas in Your DNA?

iPad 3 Will Be Thinner And Lighter, Suggests New Battery Packs