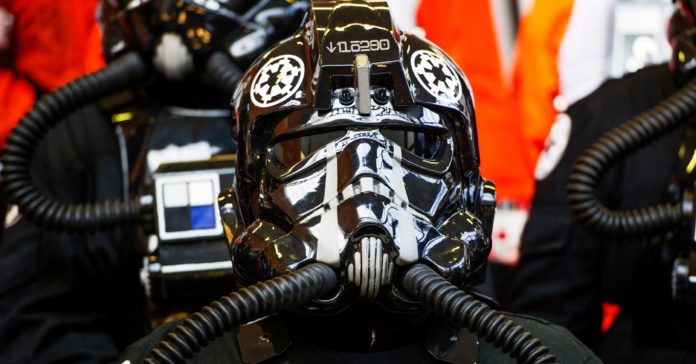 The number of physics problems hidden in Star Wars movies is much greater than you think. Oh, don’t worry. I know it’s just a movie and not one that really focuses on science. That won’t stop me from looking at something from The Empire Strikes Back—the introduction of the TIE bomber.

For a human like me who grew up on Star Wars, The Empire Strikes Back was super cool (and also one of the top three Star Wars movies of all time). In the prequel A New Hope, we see only two kinds of TIE fighters—the plain kind and Darth Vader’s special TIE fighter. But then we get to see the TIE bomber.

What the heck is a TIE bomber? It’s a TIE fighter that drops bombs … in space. Yes, right there you might say these things are dumb. Or you could just chill out and realize that this is the equivalent of a WWII bomber. That’s what it’s like.

If you want, you can get together with your friends to debate the merits of a bomber in space. For me, I’m just going to do some physics. This is going to be great.

A Plane Dropping a Package

Let’s start with a classic physics problem. A plane is flying along on a level path at a constant speed of 20 m/s at an altitude of 20 meters. The plane then drops a box of supplies to some people on the ground. If the plane drops the box at x = 0 meters, where does the box land? Assume there is no air resistance.

You can solve that problem if you like, but I really want to use it to ask a different question that doesn’t involve math. Also, it’s multiple-choice (everyone loves multiple-choice questions). The question is this: If you were able to see this box dropping from a plane (with a smoke trail), which of the following animations would correctly show the path of the dropped box?

I’m going to answer this question, but I want to look at bombs from TIE bombers first. Oh, yes, it’s true. I made these animations with Python. Here is the code (but don’t use it to cheat).

So, here is the scene. Han and Leia are trying to escape from the Imperials. Since the Millennium Falcon is broken, they temporarily hide in a cave on an asteroid. The Empire sends out the bombers to try to scare them out of hiding (I guess). Oh wait, is that a spoiler? Maybe not since the movie is almost 40 years old.

What is the motion of a space bomb as it drops out of a TIE bomber? We don’t have to guess. We can find out straight from the movie by using video analysis (I even have a book on this. With video analysis, we can look at the position of an object in each frame of the video. It’s much easier when we know the size of an object in the movie (like the size of a TIE bomber) and the camera doesn’t pan or zoom (also true for this scene).

Actually, we have two nice views of a TIE bomber dropping a space bomb. The first view shows the bombers moving straight towards the “camera” and dropping a bomb. From this (and the width of a bomber at 10.6 meters), I can plot the vertical motion of a bomb as it “falls” (if you don’t like the idea of falling, see the homework questions at the end of this post).

Here is a plot of the motion for one of these bombs. (Note: I am using the free Tracker Video Analysis software to get this data.)

From this motion, I know three things:

But wait! There’s more. Right after that view, there is a shot of the TIE bombers as seen from above. From this, I can get the horizontal motion of both the spacecraft and the “bomb.” Here is a plot:

It seems clear that the TIE bomber is moving with a fairly constant velocity—around 41 m/s. But what about the bomb? It also moves forward, but its horizontal speed decreases as it falls down (it’s the blue curve in the graph above). It’s not a perfect fit, but I can also get an approximate value for the acceleration of the bomb in the horizontal direction with a magnitude of around 32 m/s2.

Now let’s go back to the original question. In the absence of air resistance (like in space), how would an object fall from a moving plane? Without air resistance, there is only one force acting on the falling object—the downward gravitational force. This downward (and constant) force means that the object will increase in downward speed as it falls. It’s the same as if you dropped a ball from rest above the floor.

OK, just to be clear—you might get a motion like option C if you actually drop an object out of a plane on Earth. Once the thing leaves the plane, there would be a backwards pushing force from the air. This would cause the horizontal object speed to decrease such that the package (or whatever you drop) would land behind the plane.

But what is happening with the bomb from the TIE bomber? Who knows?

You don’t really understand something until you can model it. In this case, I am going to recreate this scene in VPython. I will make a 3-D model of both the TIE bomber and the bomb. It’s going to be great. The other cool thing about making a 3-D physics model of a TIE bomber is that I can view it from whatever position I like. It would be possible to view top-down or from the side. I decided to take a “camera” view that has the TIE bomber pass overhead—because I think it looks cool. This is not just an animation, it’s the full code. Click Play to run it and the pencil icon to view or edit the code (which you might need for the homework).

Oh, I should add that I cheated. I decreased the “vertical” acceleration so that the bomb takes longer to hit the ground.

I guess I should address the physics problem here—why does the bomb fall at all? The gravitational force from the asteroid is likely MUCH weaker than that on the surface of the Earth. However, the bomb “falls” down with an acceleration MUCH greater than it would on Earth. So, what’s the deal? Really, there is no way of knowing for sure. One answer would be that the bombs aren’t falling at all. Instead they are tiny little rockets with thrusters on them to push them down. Would that still be a bomb? Who cares—it still looks cool in the movie.

Wait! There is another example of bombers in Star Wars. In The Last Jedi, the movie starts off with some Resistance bombers attacking a First Order star destroyer. SPOILER ALERT: only one bomber makes it close enough to drop the bombs. But the bombs do indeed drop. In this case, you can actually see the bombs falling out of the spacecraft just like they would fall out of a B-17 bomber in WWII. There are no rockets on the bombs. They are just bombs.

It’s a bit harder to justify the physics in this scene. Perhaps the Resistance bomber has a type of bomb launcher system that throws these bombs out the bottom of the spacecraft. But if that’s the case, why wait until the ship is directly over the star destroyer? Another possibility is that the First Order ship is so massive, it gravitationally pulls the bombs towards it. But no matter what—it’s still a cool scene. Just to be clear, I’m not a Star Wars hater. I’m a Star Wars fan.

Here are some questions for you.