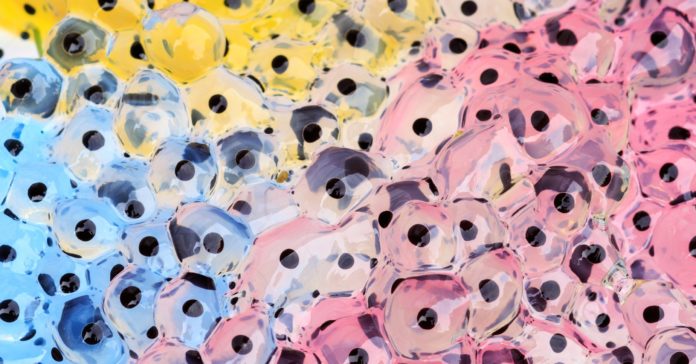 Luigi Catacuzzeno lines up a long, thin needle against a frog egg. Peering at it through a microscope, he turns the knob of a machine to nudge the needle a fraction of a micron forward. Then he deftly punctures the membrane of the soft little egg to wire it to a small capacitor, an electrical component similar to a battery.

This unusual arrangement is Catacuzzeno’s attempt to harvest energy from biological cells to power tiny electronics. Each of these frog eggs is a single cell—albeit a very large, pinhead-sized one—and “every cell is like a battery,” says Catacuzzeno, who works at the University of Perugia in Italy. Cells store and transfer electrical charge by moving electrolytes like potassium and sodium ions in and out of their membranes. “Usually, the cell’s energy is used for normal physiological function,” he says. “Neurons use this energy to send signals, and muscles use the energy to contract.” Unlike lithium batteries, cells recharge on their own, with chemical energy from the food you eat. The Gatorade you drink after a workout helps to run tiny electrical currents in cells all over your body.

Catacuzzeno’s team recently showed that they could steal some electrical power from a frog egg to charge a capacitor, and then use the stored electrical energy to produce a radio signal. Essentially, they used an egg to power a tiny walkie-talkie. The results, still under peer review, are posted on the website arXiv.

The point of all this is to eventually design microscopic robots and other medical gadgets that can run inside a person’s body and recharge themselves entirely on the inside, without relying on external power sources. Using the concepts behind Catacuzzeno’s egg power, a sensor implanted in a vein could measure your blood sugar, or a next-generation endoscope could photograph your gut and release drugs at the same time. These devices would periodically tap into your body’s own cells to refuel. “This is a new direction we could go to build very tiny machines that operate autonomously inside living organisms,” says physicist Luca Gammaitoni of the University of Perugia in Italy, Catacuzzeno’s collaborator.

A single egg produces a measly amount of power compared to everyday electronics. The researchers got the egg to produce 1.1 nanowatts of power, which means you’d need more than 10 million frog eggs to light a single LED. After charging the capacitor for about 13 minutes, it stored energy equivalent to 16 nano-ampere-hours. At that rate, it would take more than 100 million frog eggs to match the energy stored in a single AA battery.

But the specs are “reasonable for wireless sensing,” says mechanical engineer Shad Roundy at the University of Utah, who was not involved in the work. You don’t need a lot of juice to send a radio signal every 13 minutes. Then the microbot’s capacitor could recharge from another cell and gear up for the next transmission 13 minutes later. This recharge cycle would suffice for certain types of medical sensors. “Think of a diabetic pricking their finger a few times a day,” Roundy says. “If you could get an update on your glucose every 30 minutes, that would be a massive improvement.”

The bigger issue is miniaturizing the capacitor, says Roundy. Right now, the capacitor is too big to operate inside a human. Charging the capacitor inside an animal or person will also require more complicated techniques than Catacuzzeno’s demo under a microscope.

They will also have to make sure these tiny electronics are compatible with living creatures, which tend to reject foreign objects, Roundy says. At the very least, Gammaitoni says, that the amount of energy harvested is negligible to a human. Stealing a couple nanowatts here and there shouldn’t affect a person’s health. “A huge number of cells die and are regenerated every few minutes in our bodies,” he says. “Statistically, this is not something harmful to the body itself.”

The team is trying rat muscle cells next. “We want to show many cells are compatible with this approach,” Gammaitoni says. Besides, harvesting electricity from muscle cells would expand the types of sensors that could be designed, since muscles exist all over the body. It’ll give new purpose to getting swole.