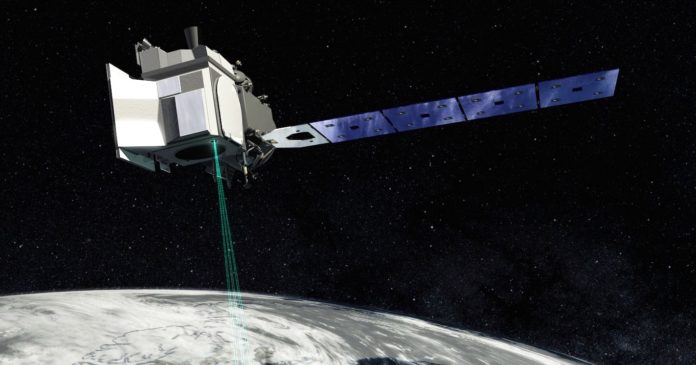 For almost a decade, NASA hasn’t had a satellite watching the planet’s melting sea ice. That’s slated to change with tomorrow’s planned launch of the $1 billion ICESat-2 satellite from Vandenberg Air Force Base, in California. Once it settles into orbit 310 miles above the Earth, the satellite will start collecting data using a specially designed laser device that will give scientists more data about exactly where ice is melting and how fast.

The NASA satellite will scan the Earth’s surface using six green laser beams to measure glaciers and floating sea ice. By taking precise measurements of the ice thickness and mass, NASA scientists will get a handle on the effects of climate change more accurately, researchers say. “We are trying to understand the processes and drivers that are behind this change and do a better job with forecasts of sea level rise,” said Tom Wagner, cryosphere program scientist at NASA Headquarters in Washington.

As a bonus, the same lasers will be able to measure the height of forests, jungles and other landforms as the spacecraft circles the globe from pole to pole. That data will be fed into estimates of how much carbon exists in the world’s temperate zones—and how much is being lost over time.

The $1 billion ICESat-2 satellite, which will travel aboard a Delta 2 rocket, took engineers more than a decade to design and build. The toughest thing was getting the lasers to work together as a unit, and making sure they are aligned properly to get accurate information. The satellite also has to know exactly where it is, using both a GPS unit as well as a camera pointed toward outer space that discerns its location in relation to fixed constellations.

Each laser bounces 10,000 times a second down to Earth’s surface and back. A 31-inch wide beryllium telescope on the satellite captures the returning light beams and sends them into an electronic signal detector that figures out the distance to Earth. The six beams cover a six-kilometer-wide strip across the Earth, measuring everything in its path (the lasers are harmless to people, plants and ice).

The 3,341-pound satellite is a long-awaited replacement for the original ICESat, which ended its one-laser mission in 2009. Since then, researchers have been flying specially equipped P-3B and DC-8 aircraft over the north and south polar regions during “Operation IceBridge,” to fill in the data gaps while waiting for ICESat-2. Its on-board instrument, known as ATLAS (Advanced Topographic Laser Altimeter System), acts like a stopwatch, firing photons that take 3.3 milliseconds to travel down to Earth and back. ATLAS times this journey down to a billionth of a second, according to NASA. Using laws of physics, the scientists can figure out the distance between the satellite to the planet’s surface down to 4 millimeters.

By comparing that distance to the same measurement made in the same place days or weeks earlier, they can calculate how the ice is melting (or expanding) and how plants are growing. Most important, it will measure the elevation changes across Greenland and Antarctica over the course of a year – and then scientists can translate that change to sea level consequences.

Researchers know sea ice in the Arctic is declining in area, but we know far less about what’s happening to its volume, according to NASA. ICESat-2 is the first satellite with the capability to measure sea ice thickness. Since sea ice floats, the lasers bounce a beam off the surface of the ice, and then compare that to a similar bounce off a nearby area of open water. But subtracting the two, they get the height of the ice around the open water.

NASA’s Wagner says the beefed-up ATLAS instrument is a huge leap over the first generation ICESat and will collect an order of magnitude more data in areas of the planet that can’t be reached by planes. The device will be especially useful “over areas where we don’t know how it’s changing now, say the deep interior of Antarctica and some coastal areas,” he says.

One scientist says ICESat-2 will help her better understand the intersection of the permanent ice sheet and the floating ice shelf that surrounds it—a place called the grounding zone. “We also expect to see some new science that we never imagined,” said Kelly Brunt, a glaciologist at NASA’s Goddard Space Flight Center in Greenbelt, Maryland, who has made numerous treks to both Antarctica and Greenland. “People are creative and will push the limits on this type of data.”

Brunt should know. She spent last winter driving a snow tractor in a 400-mile circle around the South Pole, double-checking measurements of the Antarctic ice sheet made by the IceBridge aircraft. Now Brunt and others should be able to see more of the changing planet from their laptop as well.