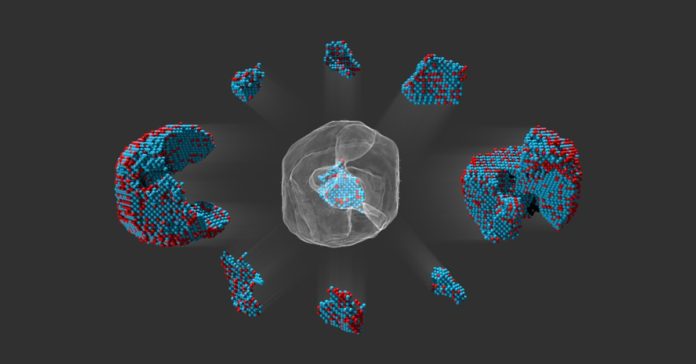 The transmission electron microscope was designed to break records. Using its beam of electrons, scientists have glimpsed many types of viruses for the first time. They’ve used it to study parts of biological cells like ribosomes and mitochondria. You can see individual atoms with it.

But experts have recently unlocked new potential for the machine. “It’s been a very dramatic and sudden shift,” says physicist David Muller of Cornell University. “It was a little bit like everyone was flying biplanes, and all of a sudden, here’s a jetliner.”

For one thing, Muller’s team has set a new record. Publishing in Nature this July, they used their scope to take the highest resolution images to date. To do this, they had to create special lenses to better focus the electrons, sort of like “glasses” for the microscope, he says. They also developed a super-sensitive camera, capable of quickly registering single electrons. Their new images show a razor-thin layer, just two atoms thick, of molybdenum and sulfur atoms bonded together. Not only could they distinguish between individual atoms, they could even see them when they were about only 0.4 angstroms apart, half the length of a chemical bond. They even could spot a gap where a sulfur atom was missing in the material’s otherwise repeating pattern. “They could do this primarily because their electron camera is so good,” says physicist Colin Ophus of Lawrence Berkeley National Lab, who was not involved with the work.

Now the rest of the field is clamoring to outfit their scopes with similar cameras, says Muller. “You can see all sorts of things you couldn’t before,” he says. In particular, Muller is studying thin materials, one to two atoms thick, that exhibit unusual properties. For example, physicists recently discovered that one type of thin material, when layered in a certain way, becomes superconducting. Muller thinks that the microscope could help reveal the underlying mechanisms behind such properties.

When it comes to magnifying the miniscule, electrons are fundamentally better than visible light. That’s because electrons, which have wavelike properties due to quantum mechanics, have wavelengths a thousand times shorter. Shorter wavelengths produce higher resolution, much like finer thread can create more intricate embroidery. “Electron microscopes are pretty much the only game in town if you want to look at things on the atomic scale,” says physicist Ben McMorran of the University of Oregon. Pelting a material with electrons and detecting the ones that have traveled through produces a detailed image of that material.

But high resolution isn’t the machine’s only trick. In a paper recently uploaded to the open source physics website arXiv, a team led by McMorran has developed a new type of image you can take with the microscope. This method can image materials normally transparent to electrons, such as lightweight atoms like lithium. It should allow scientists to study and improve lithium-based batteries with atomic detail.

There’s more. By measuring a property of the electron called its phase, they can actually map the electric and magnetic fields inside the material, says Fehmi Yasin, a physics graduate student at the University of Oregon. “This technique can tease more information out of the electrons,” he says.

These new capabilities can help scientists like Mary Scott, a physicist at the University of California, Berkeley, who studies nanoparticles smaller than a bacterium. Scott has spent long hours photographing these tiny inanimate clumps under an electron microscope. Using a special rig, she carefully tilts the sample to get as many angles as possible. Then, from those images, she creates an extremely precise 3-D model, accurate down to the atom. In 2017, she and her team mapped the exact locations of 23,000 atoms in a single silver and platinum nanoparticle. The point of such painstaking models is to study how individual atoms contribute to a property of the material—how strong or conductive it is, for example. The new techniques could help Scott examine those material properties more easily.

But the ultimate goal of such experiments isn’t merely to study the materials. Eventually, scientists like Scott want to turn atoms into Legos: to assemble them, brick by brick, into brand new materials. But even tiny changes in a material’s atomic composition or structure can alter its function, says Scott, and no one fully understands why. The microscope images can teach them how and why atoms lock together.

*Update at 10:52 p.m. on 9/24/18: An earlier version of this story misstated the publication status of McMorran’s paper.