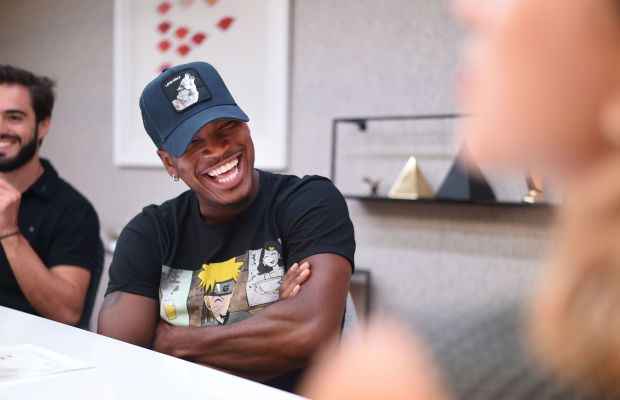 Dressed in a Naruto t-shirt and a hat emblazoned with the phrase “lone wolf,” Ne-Yo slouches over in a chair inside a Holberton School classroom. The Grammy-winning recording artist is struggling to remember the name of “that actor,” the one who’s had a successful career in both the entertainment industry and tech investing.

“I learned about all the things he was doing and I thought it was great for him,” Ne-Yo told TechCrunch. “But I didn’t really know what my place in tech would be.”

It turns out “that actor” is Ashton Kutcher, widely known in Hollywood and beyond for his role in several blockbusters and the TV sitcom That ’70s Show, and respected in Silicon Valley for his investments via Sound Ventures and A-Grade in Uber, Airbnb, Spotify, Bird and several others.

Ne-Yo, for his part, is known for a string of R&B hits including So Sick, One in a Million and Because of You. His latest album, Good Man, came out in June.

Ne-Yo, like Kutcher, is interested in pursuing a side gig in investing but he doesn’t want to waste time chasing down the next big thing. His goal, he explained, is to use his wealth to encourage people like him to view software engineering and other technical careers as viable options.

“Little black kids growing up don’t say things like ‘I want to be a coder when I grow up,’ because it’s not real to them, they don’t see people that look like me doing it,” Ne-Yo said. “But tech is changing the world, like literally by the day, by the second, so I feel like it just makes the most sense to have it accessible to everyone.”

Last year, Ne-Yo finally made the leap into venture capital investing: his first deal, an investment in Holberton School, a two-year coding academy founded by Julien Barbier and Sylvain Kalache that trains full-stack engineers. The singer returned to San Francisco earlier this month for the grand opening of Holberton’s remodeled headquarters on Mission Street in the city’s SoMa neighborhood.

Holberton, a proposed alternative to a computer science degree, is free to students until they graduate and land a job, at which point they are asked to pay 17 percent of their salaries during their first three years in the workforce.

It has a different teaching philosophy than your average coding academy or four-year university. It relies on project-based and peer learning, i.e. students helping and teaching each other; there are no formal teachers or lecturers. The concept appears to be working. Holberton says their former students are now employed at Apple, NASA, LinkedIn, Facebook, Dropbox and Tesla.

Ne-Yo participated in Holberton’s $2.3 million round in February 2017 alongside Reach Capital and Insight Venture Partners, as well as Trinity Ventures, the VC firm that introduced Ne-Yo to the edtech startup. Holberton has since raised an additional $8 million from existing and new investors like daphni, Omidyar Network, Yahoo! co-founder Jerry Yang and Slideshare co-founder Jonathan Boutelle.

Holberton has used that capital to expand beyond the Bay Area. A school in New Haven, Conn., where the company hopes to reach students who can’t afford to live in tech’s hubs, is in development.

The startup’s emphasis on diversity is what attracted Ne-Yo to the project and why he signed on as a member of the board of trustees. More than half of Holberton’s students are people of color and 35 percent are women. Since Ne-Yo got involved, the number of African American applicants has doubled from roughly 5 percent to 11.5 percent.

“I didn’t really know what my place in tech would be.”

Before Ne-Yo’s preliminary meetings with Holberton’s founders, he says he wasn’t aware of the racial and gender diversity problem in tech.

“When it was brought to my attention, I was like ‘ok, this is definitely a problem that needs to be addressed,’” he said. “It makes no sense that this thing that affects us all isn’t available to us all. If you don’t have the money or you don’t have the schooling, it’s not available to you, however, it’s affecting their lives the same way it’s affecting the rich guys’ lives.”

Holberton’s founders joked with TechCrunch that Ne-Yo has actually been more supportive and helpful in the last year than many of the venture capitalists who back Holberton. He’s very “hands-on,” they said. Despite the fact that he’s balancing a successful music career and doesn’t exactly have a lot of free time, he’s made sure to attend events at Holberton, like the recent grand opening, and will Skype with students occasionally.

“I wanted it to be grassroots and authentic.”

Ne-Yo was very careful to explain that he didn’t put money in Holberton for the good optics.

“This isn’t something I just wanted to put my name on,” he said. “I wanted to make sure [the founders] knew this was something I was going to be serious about and not just do the celebrity thing. I wanted it to be grassroots and authentic so we dropped whatever we were doing and came down, met these guys, hung out with the students and hung out at the school to see what it’s really about.”

What’s next for Ne-Yo? A career in venture capital, perhaps? He’s definitely interested and will be making more investments soon, but a full pivot into VC is unlikely.

At the end of the day, Silicon Valley doesn’t need more people with fat wallets and a hankering for the billionaire lifestyle. What it needs are people who have the money and resources necessary to bolster the right businesses and who care enough to prioritize diversity and inclusivity over yet another payday.