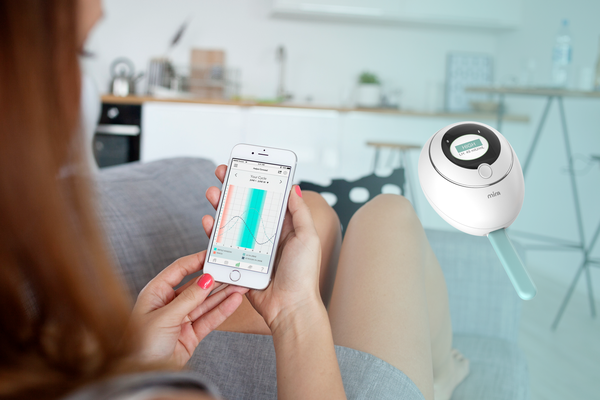 Mira, launching today at TechCrunch Disrupt SF 2018, is a new device that aims to help women who are struggling to conceive. The Mira Fertility system offers personalized cycle prediction by measuring fertility hormone concentrations in urine samples, telling women which days they’re fertile. The system is more advanced and accurate than the existing home test kits, the company claims, which can be hard to read and aren’t personalized to the individual.

The company behind Mira, Quanovate, was founded in late 2015 by a group of scientists, engineers, OBGYN doctors, and business execs to solve the problem of the unavailability of advanced home health testing.

“I have a lot of friends who, like me, [prioritized] their career advancement and higher education, and they tended to delay their maternal age,” explains Mira co-founder and CEO Sylvia Kang. “But there’s no education for them about when to try for a baby, and they have no awareness about their fertility health,” she says.

Kang received an MBA at Cornell Johnson, went to Columbia for an MS in Biomedical engineering and received at PhD in Biophysics from University of Pittsburgh, before working as a Business Director at Corning where she was responsible for $100 million in global P&L, which she left to start Mira.

She says that women’s hormones are changing daily, and everyone’s profiles differ due to their lifestyle, stress levels and other factors. The only way to accurately track fertile days, then, is through continuous testing – something that’s been difficult to do at home.

To solve this problem, the team worked to develop the Mira system, which includes a small home analyzer, urine test strips, and an accompanying mobile application. The home analyzer miniaturizes lab equipment for home use, and brings down the cost.

To use the system, the woman places the test strip into the device which then uses immunofluorescence technology to read the results. Currently, the device tests for the presence of luteinizing hormone (LH), which is an indicator of ovulation. However, the company has already has plans to update the device so it can test for other hormones in the near future. (It’s FDA-cleared to detect estrogen, for example, but that won’t be available at launch.)

The system instead is $199 and ships with 10 test strips. After analyzing the strip, information about the hormone levels is displayed on the screen and sent to the Mira app via Bluetooth.

The app offers women more information about what this data means – like whether they should attempt to conceive today or wait. A subscription service will also offer them access to doctors so they can ask questions, but this will be free at launch.

“This technology is completely different from all the test strips on the market. It’s more accurate, but more importantly, this one is quantitative – that means we give you your actual, formal concentrations,” says Kang. “The [existing] tests strips only give you positive or negative. Since we have your numbers, our A.I. can do pattern recognition. Our algorithm prediction is based on your pattern specifically, not the average of all the population.”

What this means, in practice, is that women struggling to conceive will have more accurate, more actionable, and more personalized results with Mira. During a clinical trial with 400 patient samples, Mira reached 99 percent accuracy, compared with lab equipment, the company says. They also have 18 IPs covering hardware, software, database management and more, including utility patents and models, design patents, trademarks and copyrights.

The company is now working on a portal for doctors, so they could access their own patients’ data for further analysis. Mira may also eventually make its collected data, once anonymized, available to researchers, as well. But Kang says no formal decisions have been made on that front yet.

Longer-term, Kang explains that the same system can be adapted to track pregnancy and menopause, and eventually similar technology could be put to use for analyzing other conditions, like those related to kidney problems or the thyroid.

The Pleasanton, Calif.-based company, is currently a team of 36 and has raised $4.5 million from investors including Gopher Ventures, and two other cross-border investors Mira doesn’t want to disclose publicly.

At Disrupt, the company announced the Mira device is now available for pre-order and will begin shipping in October 2018.

It’s sold online via the Mira website, but is in discussions with doctors and retailers to broaden its availability going forward.