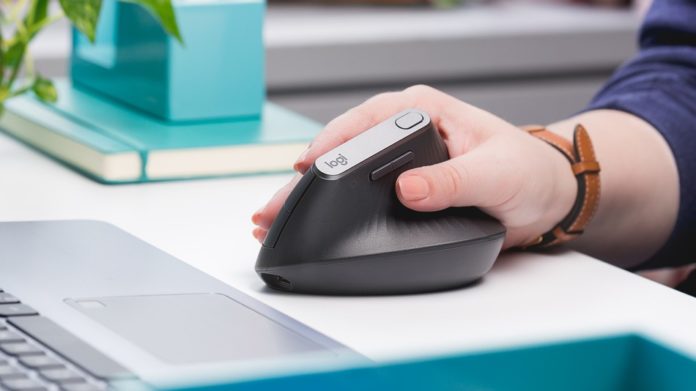 Right and left clicker sit too high • Uncomfortable to use

The Logitech MX Vertical flips a traditional mouse on its side. The idea has some benefits, but they don’t make up for a bumpy user experience.

Logitech is flipping the design of the computer mouse on its side with its MX Vertical Advanced Ergonomic mouse.

The idea is to re-invent the mouse, at the same time making in forward-looking and more useful, I guess. It also happens to look like an enlarged garlic clove.

The point of a vertical mouse is to provide an “ergonomic” design (i.e. one that won’t strain your hand). The packaging is says it positions your hand at a 57-degree angle, which is apparently a more “natural” one. However, there’s a steep learning curve — one I ultimately never conquered.

It looks and feels futuristic 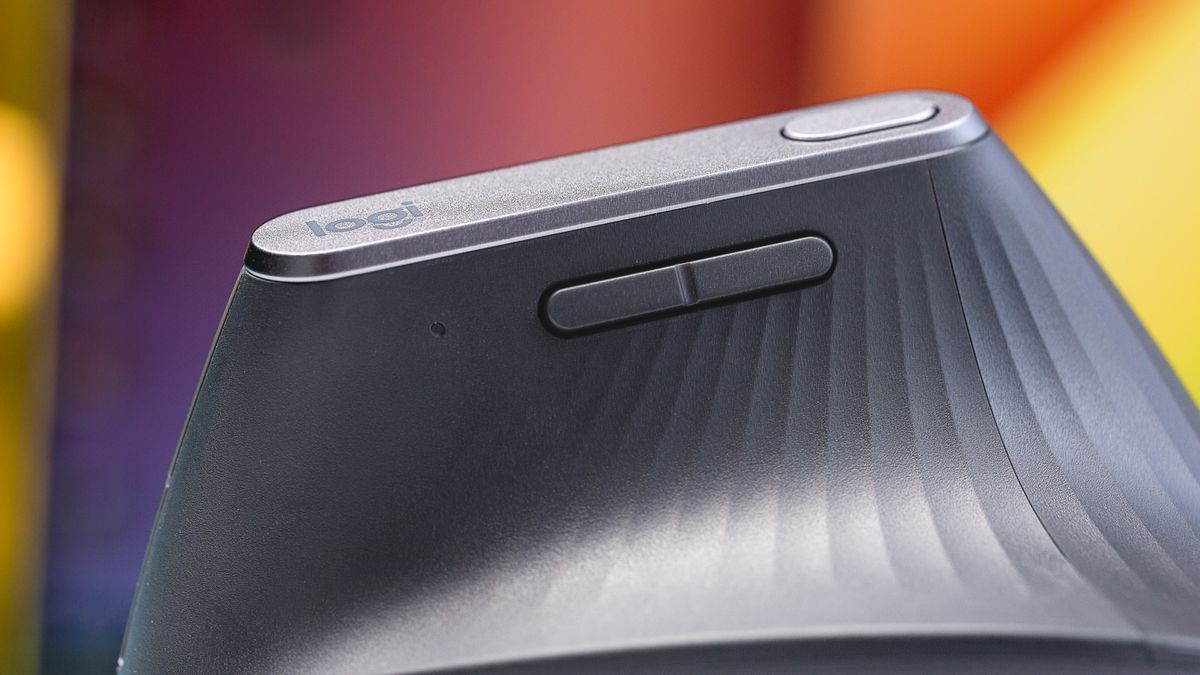 The MX vertical is interesting-looking, but that only goes so far. By flipping the mouse controls on the side, it’s like you’re shaking a hand when using it. Your index and pointer finger will rest on the left and right clickers, with a scroll wheel in the middle.

So on what would typically be the backside of the mouse, you rest your thumb on a grippy surface, which also has the forward and backward buttons. It’s definitely an experience that takes getting used to. For starters, the bumps along the exterior don’t go all the way around, which makes it less intuitive to hold. 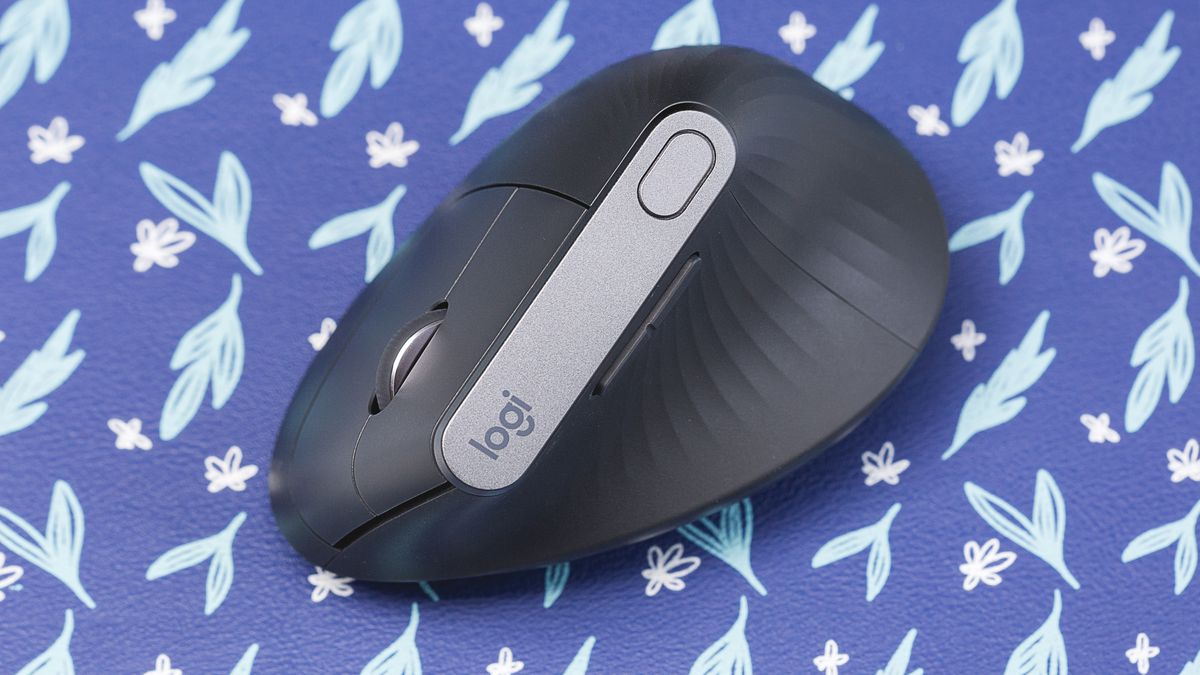 You can turn the MX Vertical on or shut it off with a small switch on the bottom. Luckily, Logitech didn’t put the charging port next to the switch like Apple’s Magic Mouse does; instead, the USB-C charging port sits on the front of the device.

To make sure the mouse moves smoothly, Logitech put a thin rubber lining around the edge of the bottom, letting you use the MX Vertical without a mouse pad on a variety of surfaces.

The MX Vertical can confuse your muscle memory 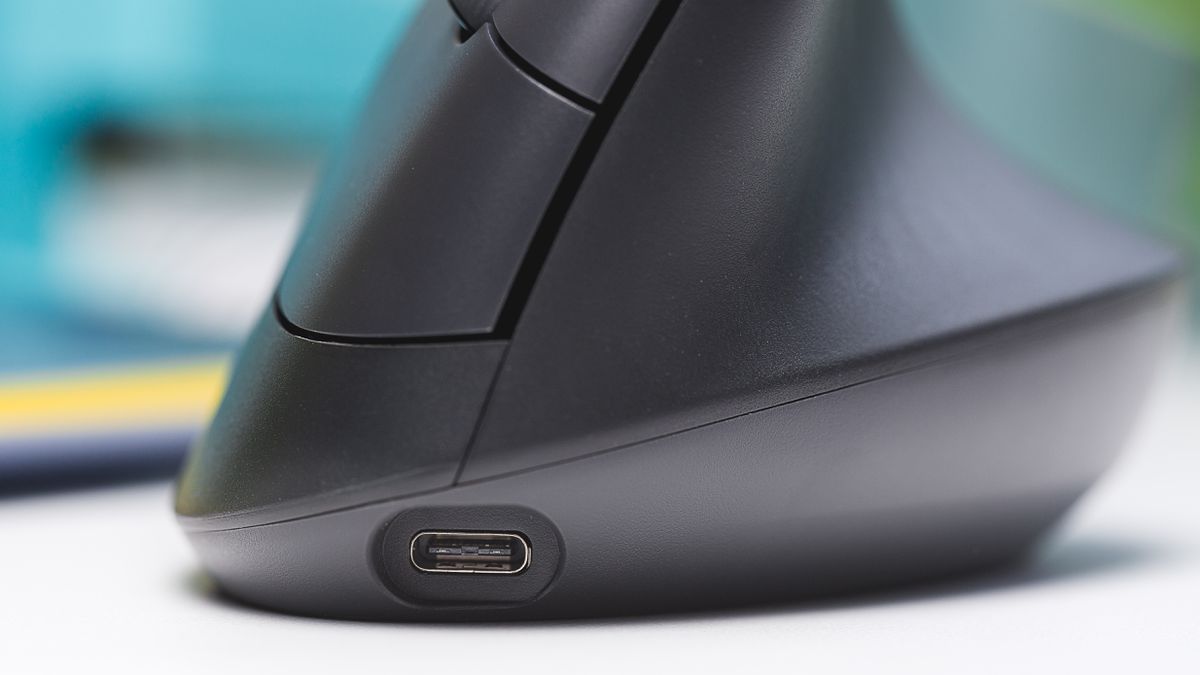 In trying to use Logitech’s innovative mouse, I regularly found myself trying to click buttons that weren’t there. It was hard to retrain my hand to find the left and right clicker buttons, especially since Logitech put an inch of space below them with no grooves or humps.

Still, after a few days, I was getting in the groove. However, dragging and dropping documents remained a challenge — I would often accidentally let them go when I didn’t mean to.

In short, the MX Vertical takes a while to figure out. If you’re expecting to just plug this in and be a vertical-mouse whiz, chances are that’s not going to happen.

It’s not so much that it reinvents the controls, but rather your finger movements. Of course, you can still click to navigate a webpage, open a text, start a text field, and even make some light photo adjustments. Logitech’s MX Vertical also throws in a forward and backward button for the thumb to use. That’s handy, but be wary of how you move your thumb. In my testing, I would frequently engage one of these controls by accident, and my workflow would get jumbled. You also use your thumb to change the pointer speed on the fly via the small circular button on the top.

Each clicker has a good tactile feel to it and makes a sound — like any good mouse does. Same goes for the scroll well, which worked well to make it through a long document easily or to scroll through results in a browser. I do imagine that, over time, dust could build up in the gap between the right and left clickers and the scroll wheel, though.

I tried one game of Fortnite with the MX Vertical and immediately regretted it. Flipping the location of the core clickers really screwed up my rhythm and didn’t offer the accuracy I needed for gaming. The scroll wheel performed differently than console controls, keyboard ones, and a traditional mouse. This is definitely not a gaming mouse.

Wrist comfort: not a feature 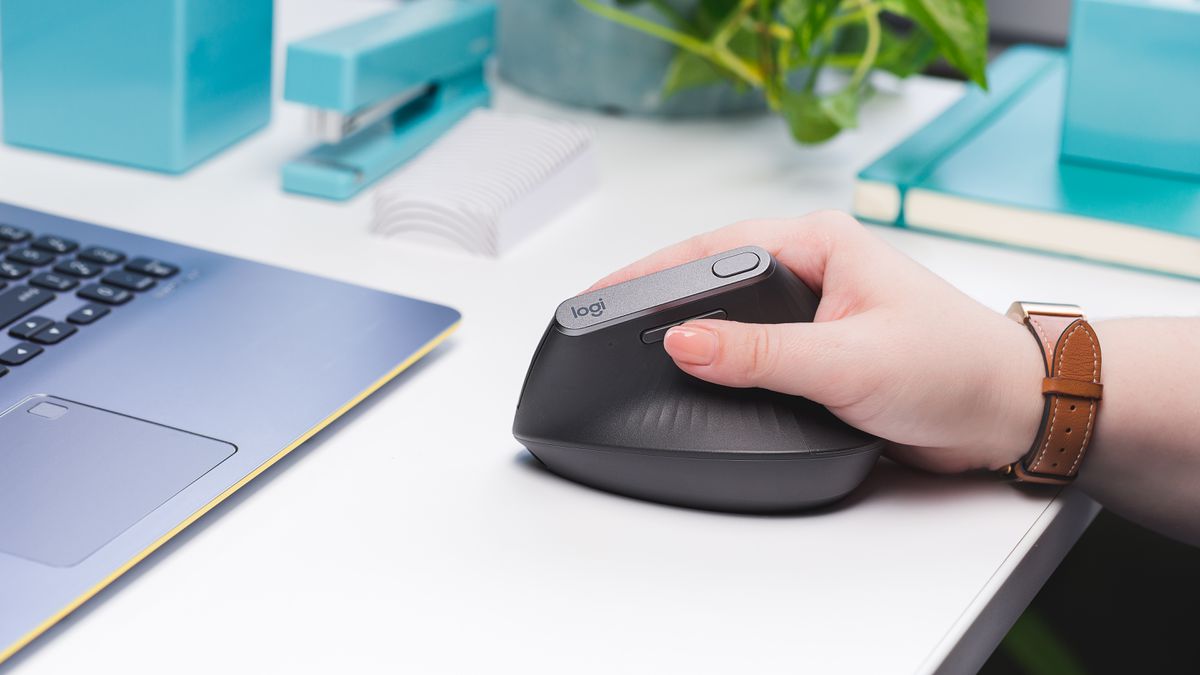 One of the main ideas behind Logitech’s vertical-mouse design is that it’s more ergonomic and be more comfortable on your wrist and arm. However, I found that the MX Vertical, far from reducing pain, merely relocates it. I am right handed, and after using the mouse for a few hours, I began to get sore on the top and side of my wrist.

This is a bummer to say the least. To fix this I would likely need an elevated mouse pad, which would be an additional expense. 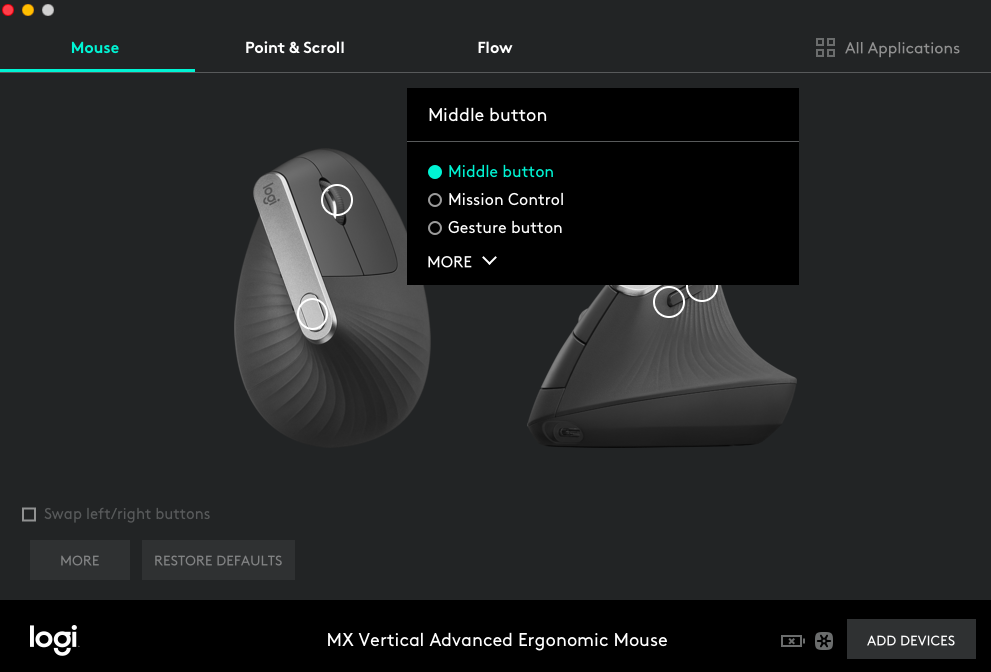 Along with the MX Vertical, Logitech includes its Options app for Windows and macOS. This is the command center for all of your available accessories, like keyboards and mouses. In here you can get a tour of the MX Vertical, see the default button setup, and make changes.

For example, you can have the circular button along the central ridge change the pointer speed, engage mission control, or play and pause content. You can customize the other buttons as well. Logitech lets you have this same level of possibilities for the forward and backward buttons on the left-hand side. 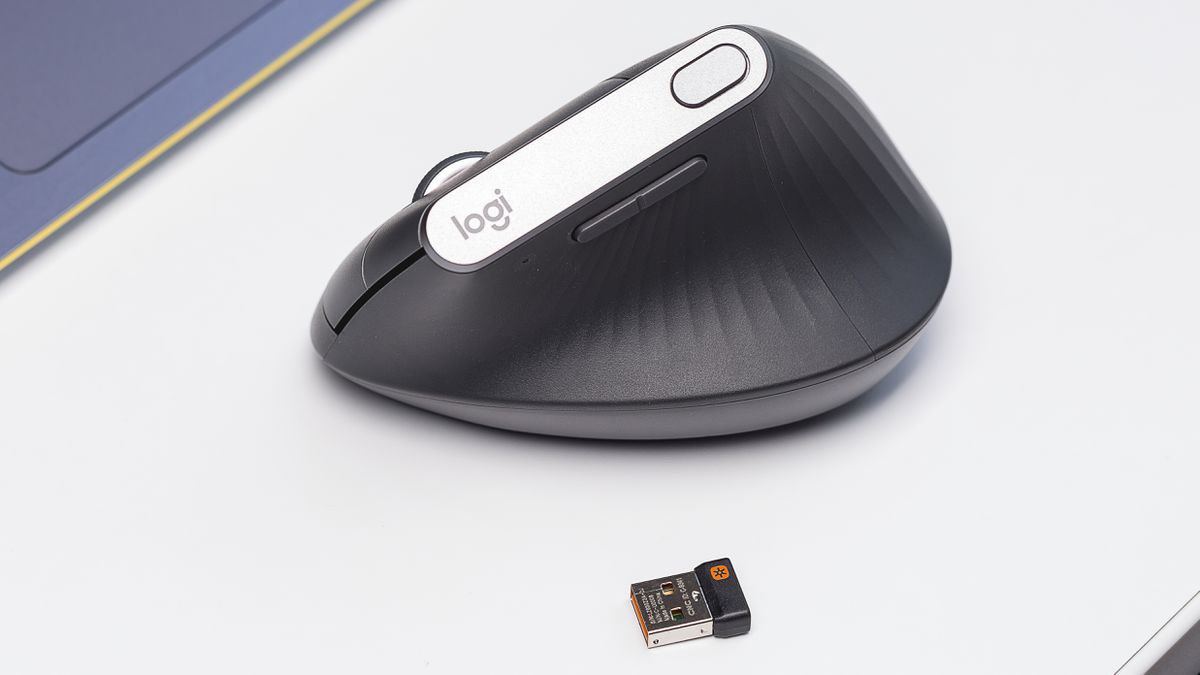 Like Logitech’s other wireless mice, you have the option of connecting through a receiver that plugs into a USB port directly to your computer via Bluetooth. Both of these standards are on-board the MX Vertical. Bluetooth pairing is done through a button on the bottom of the mouse, and it showed up within a few seconds on a MacBook Air. The connection was pretty strong even from a few feet away.

Bluetooth will allow you to pair the MX Vertical with multiple devices, like a tablet and a laptop. You can quickly switch between the two, and it’s a nice trick that allows you to have one, and only one, peripheral on your desk.

Setup is definitely easier if you use the USB receiver, which is basically plug and play. And if you have other Logitech gear, you can connect them all to a single receiver with some minor settings adjustments.

Either way, the MX Vertical should work like a charm, with virtually no lag, once connected. However, if you want to go old school, you can always plug the MX Vertical in with the USB-C to USB-A cable for a hard-wired experience.

Logitech isn’t asking for an insane amount for the MX Vertical. At $99.99, it’s in line with other high-end computer peripherals, and the design is eye-catching.

However, a vertical mouse isn’t the clear step forward Logitech seems to think it is. After using it for a while, I found the experience lacking. While I could get used to the unintuitive button placement, my discomfort made me question the ergonomic benefits.

At the end of the day Logitech’s MX Vertical is a good mouse, but for $99 you should really be getting a great mouse. 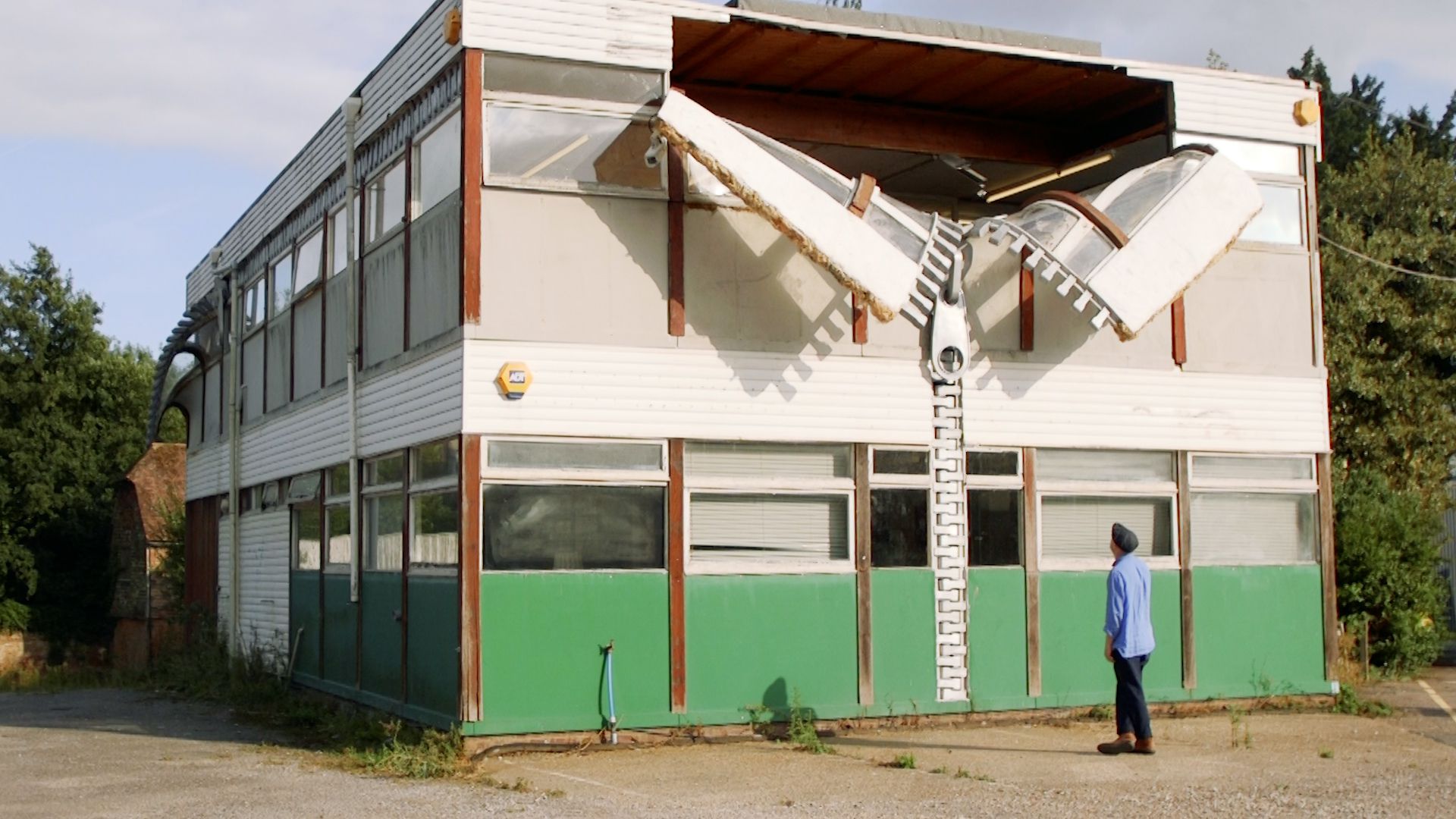 GizmoCrazed - February 13, 2012 1
It's a part of human nature to dream about things that may never be possible. Antonio De Rosa at ADR studios did the same...

Top 10 Best Universities In The World