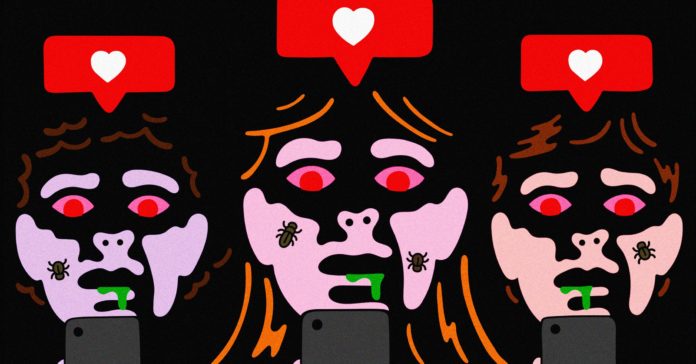 You’ve heard that social media is screwing with your brain. Maybe you even read about it on social media. (So meta; so messed up.) The neurochemical culprit, dopamine, spikes when you like and get liked, share and are shared. You’ve probably also heard scientists compare the affliction to drug or alcohol addiction. That’s fair. The same part of the brain lights up.

Scroll, scroll, scroll. It’s a phenomenon now so pervasive that it’s got a name: zombie scrolling syndrome. (The security company McAfee coined the phrase in 2016.) We are the undead of lore, shambling through the world, moaning and groaning with half-closed eyes. I’d like to be able to tell you this is a fantastical bit of exaggeration, that we shouldn’t be so hard on ourselves. I can do no such thing.

The analogy, it turns out, has legs. Consider parasites. An astonishing number of them exist in nature, from worms to wasps, and some have the power of mind control. Or, said another way, zombification. And these fiends are doing it in—gulp—ways that bring to mind social media.

Take the jewel wasp. She grabs a cockroach twice her size and drives her stinger through the poor thing’s neck and into its head, feeling around the brain before injecting nonlethal venom in two precise spots. (OK, not quite like Facebook, but stay with me.) Post-surgery, the cockroach just keeps grooming itself while the wasp drags it into a burrow by its antenna. The wasp then lays an egg on the cockroach’s leg, seals the tomb, and goes about her life.

In a few days, the wasp egg hatches into a larva that latches onto the roach and drinks its bodily fluids. Again, the bug doesn’t complain. It’s not paralyzed; it’s fully capable of breaking out of its prison. But the roach doesn’t. As the fluids run dry, the larva burrows into the body to eat the organs one by one, hollowing out the roach’s abdomen while the thing is still alive (read: undead). Eventually it emerges as an adult wasp, finally killing its host.

According to researchers, the wasp’s secret appears to be—wait for it—dopamine. The wasp loads up its venom with the neurotransmitter, and that cocktail alters the roach’s behavior in ways scientists are only beginning to understand. Weirdly, in cockroaches and other creatures, dopamine regulates grooming, hence the insect’s fanatical insistence on cleaning itself instead of running for its life. (Not like humans would ever primp for a totally natural and spontaneous selfie.)

The weapon of choice for other zombifiers is serotonin, another well-studied neurotransmitter. There’s a tiny worm, for instance, that begins life in the stomach of crustaceans called amphipods. Then the worm finds itself with a problem. To live, it has to get into the stomach of a bird, which means it needs its host to get noticed. Complicating things, fish love to eat amphipods. That’s bad for our protagonist: In a fish belly, the worm will dissolve.

So the worm mind-controls its crustacean to spend more time at the pond’s surface, where it’s likelier to draw the attention of birds. That little baby worm can even change its host’s color to a more conspicuous hue. The worm itself isn’t releasing serotonin; somehow it’s short-­circuiting the amphipod’s nervous system to overproduce the chemical. Researchers think this may cause the victim to mistake light for darkness. Instead of diving into the safety of the murky depths, it ascends to the surface—and to death from above.

Whatever their strategy, zombifying parasites are hacking biology. And so, with their A/B-tested, keep-you-permascrolling tactics, are the titans of social media. Like any living creature, we are manipulable—our brains are chemical soups, programmed to need and be needed. Prehistorically, it’s what helped us stick together to not get eaten. “It was clearly adaptive to be so sensitive to social stimuli,” says UCLA psychologist Patricia Greenfield. “But evolution never expected that we would be getting social stimuli from people we don’t even know.” We’re not only vulnerable, in other words. We also lack defenses.

There’s a good reason that more than half the organisms on earth are parasites: If you live off the nutrients and energy of someone else, you don’t have to run around and hunt for yourself. It’s a hell of an effective strategy. And one thing is clear: You don’t want to be the hunted.

But there might be hope. Not every parasitic relationship ends in death. Take it from crickets.

All around the world, threadlike critters called horsehair worms grow in the bellies of crickets, feeding on their juices. Once the worms get big enough, they persuade their hosts to do the unthinkable: leap into a stream or pond and risk drowning (or death by fish). In the water the worm makes its move, drilling through the cricket’s belly and swimming away to find fellow worms to mate with. Amazingly, the cricket can survive a parasite many times its length squirming out of its body, provided it swims to shore afterward.

Scientists know the horsehair worms are releasing a chemical concoction that instructs the crickets to go full kamikaze. But in this case, the cricket does well by putting its life in danger and jumping in the drink—if it can’t get rid of the worm, the body snatcher will die in its belly and kill its host. Biologists call this, no joke, the mafia hypothesis: Give in to the bullying or die.

So we don’t have to be the cockroach or the amphipod. We can be the cricket, with the power to purge our systems of zombify­ing parasites. When you uninstall Facebook on your phone or delete your Instagram account, you’re taking a leap into that pond. You might belly flop, but it’s unlikely you’ll drown. And you won’t get eaten by a fish. Probably.

Matt Simon‘s new book Plight of the Living Dead comes out in October.

This article appears in the September issue. Subscribe now.