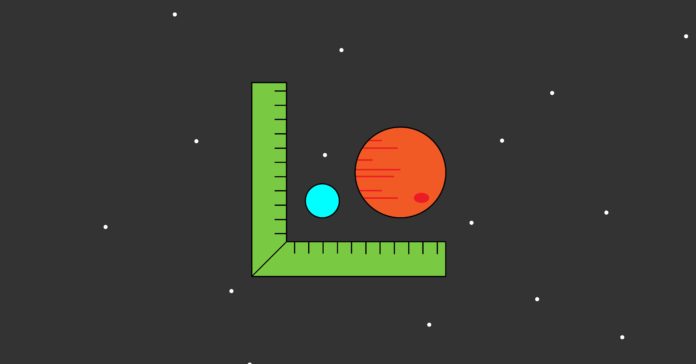 If you want to find the size of a basketball, you can use a normal meter stick to measure the diameter. You should get a value of around 0.24 meters. Please don’t use inches—they are just harder to deal with. Anyway, you probably aren’t using Imperial units since there are only three countries that officially use this system: Myanmar, Liberia, and… the United States. It’s time to move to the metric system like everyone else.

But what if you want the distance from New York to Los Angeles? Sure, you can still use meters with a distance of about 3.93 x 106 meters or you could use kilometers (3,930 km). But really, kilometers is just a nice way of using meters. It’s the same unit of distance, just with a prefix. Units of meters (or kilometers) works well enough for things as big as the Earth, with a radius of about 6.37 x 106 meters.

However, outside of the Earth stuff starts getting super big. With very large things it’s often useful to use very large distance units. Let’s go over the three most common distance units in astronomy.

The name of this unit sort of makes it sound more important than it is—it’s still important, but not for the rest of the universe. In short, the Astronomical Unit (AU) is the distance from the Earth to the Sun. That’s not technically correct since the Earth’s orbit around the Sun isn’t perfectly circular. Let’s just say the AU is the average distance to the Sun—that will work for now.

So, here’s the deal. The ancient Greeks did some awesome measurements of the Earth and moon (and they tried to get the distance to the Sun)—but that one’s pretty tough. But even without an accurate value for the Sun-Earth distance, later astronomers could still do some nice modeling of the solar system. In fact Johannes Kepler found the the time it takes a planet to orbit the Sun was proportional to its distance to the Sun (again, technically these orbits are ellipses). Using this, he determined the distance from other planets to the Sun in terms of the Earth’s distance. Boom—that gets you the distance in AU.

Of course no one wants to stop and leave all the solar system stuff in terms of AU. We really want the conversion factor between AU and meters. To get this, you need to actually measure the Earth-Sun distance. That’s not such an easy task, but there is one way to get a reasonable value—use the transit of Venus. This happens when the planet Venus passes between the Earth and the Sun (it doesn’t happen as often as you would think). By measuring the exact start and finish time of the transit from different parts of the Earth you can get a value for AU in terms of the size of the Earth (which we mostly know). Here are all the details of that calculation in case you are interested.

How far is the closest star? That would be Alpha Centauri at a distance of 2.67 x 10^5 AU (you can convert that to meters for homework). So you see we are in the same problem again. It might make more sense to use a distance unit that doesn’t involve ginormous numbers. That’s where the parsec comes in.

The parsec depends on one big idea—parallax. Let’s start with a simple experiment you can do at home. Hold your arm out straight in front of you with your thumb sticking up. Don’t worry about looking silly, here—I will do it too.

Now look at your thumb and close one eye (it might help to also say “camera one”). With one eye closed, what in the background does your thumb line up with? It doesn’t matter, just realize that it is somewhere. Next, switch eyes (and say “camera two”)—but don’t move your thumb. You should notice that your thumb’s position with respect to the background changes. This is parallax. It is the apparent change in position of an object when viewed from a different location. The closer the object is to your face, the greater the apparent change. Oh, this is part of the way augmented reality in the iOS ARKit works.

Oh, you need that angle measured in radians (not degrees). You can see that in order to get measurable angular shifts, you need a pretty big change in observation locations for things like a star (super far away). What if we observe an object from the Earth on one side of the Sun and then 6 months later on the other side? In that case, a star would give a small angular shift. Like this:

With the known distance from the Earth to the Sun (yes, we need that distance still) and the angular shift of a star then we can calculate the distance to the star. Yes, this also depends on other stars that are super far away so that they don’t move too much. If all the stars were the same distance from our Sun, it would be difficult to measure the angular shift.

Now for the parsec. This is defined such that 1 parsec is the distance a star needs to be such that it has an apparent angular shift of 1 arc second of a degree. Let’s find the conversion of parsecs to AU—just for fun.

Step one is to get the angular shift of 1 arc second in radians.

The rest is simple. Just take 1 AU divided by this angular shift. If you put it in your calculator you get 2.06 x 10^5 AU. Go ahead and repeat this for the conversion between parsec and meters. It will be fun.

Parsecs are cool. They sound so cool that you could use them in a space movie but use it as a time and not a distance (since it sounds like a distance). Then 40 years later, you could make another movie that somehow justifies the incorrect use of the parsec. That would be awesome (hint—I’m a huge Star Wars fan).

The speed of light is both finite and constant with a value of approximately 2.998 x 108 m/s. The distance light travels in a certain amount of time can be found with the definition of velocity (in one dimension):

Calculating the size of a light-year means finding the time interval (Δt) in units of seconds instead of years since the speed is in meters per second. I skipped the part where I convert 1 year into seconds, but after that I can calculate the conversion between light-years and meters.

How about this? What if you convert 1 AU into light-years? I will leave the math as a homework problem for you, but the answer is 1.58 x 10-5 light-years. This is the same as 8.3 light-minutes. Think about that. It takes light 8 minutes to go from the Sun to the Earth. Or how about this? Jupiter is around 40 light-minutes away from the Earth (distance varies). So, when you look at Jupiter in the night sky, you are actually looking at it in the past. Forty minutes in the past. Your eyes are a time machine.

The farther away we look, the deeper into the past we look. Even for things very close, like your computer screen, you are looking at it in the past (very near past). Since light takes a finite time to travel and since we see with light—you are looking in the past.

That’s what makes the light-year unit so appropriate for astronomy. When we look at a galaxy that is 10 billion light-years away, we are looking 10 billion years into the past. Awesome.

GizmoCrazed - June 26, 2019 0
Ever since the notch was first added to smartphones, everyone in the world except the deeply deluded and my editor have wished it gone....

Noisy Quantum Computers Could Be Good for Chemistry Problems

Mars Doesn't Need Our Microbes: How to Keep the Red Planet...