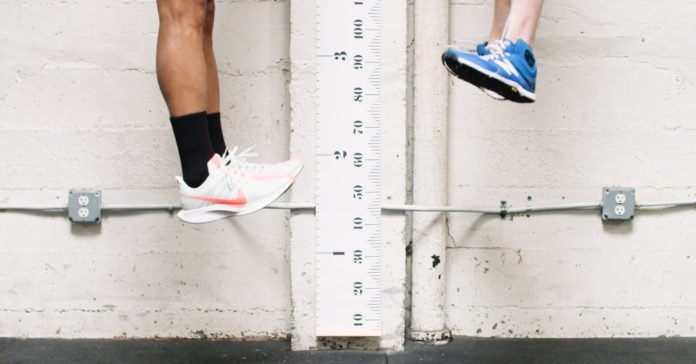 Few people would be foolish enough to go toe-to-toe with Evan Ungar in a jumping contest, but on a recent Tuesday I stood beside a length of measuring tape, hung vertically from the wall of a CrossFit gym in the middle of San Francisco, to do just that.

I had no delusions of out-leaping Ungar, who, in 2016, set the world record for the standing box jump by sproinging onto a stack of weight-plates piled 63 and a half inches high. Mine were delusions of a different sort, namely that Ungar would not thoroughly embarrass me. But then someone counted down from three. On “go,” we both leaped. I briefly rose, and soon reached the apex of my jump. Not Ungar. By the time I’d begun my descent, he was still rising up up up, ascending toward a final cruising altitude roughly twice my own. The sight of him rising past me as I peaked is still seared into my retinas, like the afterimage of a human rocket launch. Here, for your amusement, is some footage of the carnage:

Athletes with hang time like Ungar have long fascinated lesser leapers like myself. Track and field phenom Ray Ewry—Gold medalist in the standing high jump at the 1900, 1904, 1906, and 1908 Olympic Games—once cleared a bar 65 inches high. For decades, the vertical jump has been a hallmark event in the strength and agility tests undergone by draft prospects at the NFL combine. More recently, YouTube has helped elevate athletes like Ungar to celebrity status in CrossFit circles and online message boards.

It’s not hard to see why. What Ungar does is remarkable: When he performs a box jump, he faces his target, springs subtly toward it, and—this is the important bit—shunts his knees toward his armpits. That final midair maneuver raises his feet nearly to the level of his hips, where, if all goes as planned, they alight atop his landing zone right as he reaches the apex of his flight. In a well-timed box jump, Ungar’s feet touch down right as his upward velocity and downward velocity equal zero. The result is a surprisingly gentle landing.

But Ungar’s aerial contortion act highlights a crucial difference between the box jump and the vertical leap performed by NFL hopefuls: The point of the former is to get the bottoms of your feet as high as you can, while the goal of the latter is to elevate your center of mass as high as possible in a single bound.

Your center of mass is not something you can augment mid-flight, which is why the greatest standing vertical leap ever measured at an NFL combine was 46 inches, a record set by former Dallas Cowboys safety Gerald Sensabaugh. That’s 17 and a half inches shy of Ungar’s record-setting box jump, but it’s a full foot higher than the 34-inch height he appeared to float to when I jumped with him a couple weeks ago. Whether someone like Sensabaugh has the hip- and knee-flexibility to translate a world-class vertical leap into a world-class box jump is unclear, but Ungar thinks someone with mad hops and Gumby-like limbs could post a box jump of 70 inches or higher.

Disregarding in-flight flexibility, what box jumpers and vertical leapers share in common are the ways they manipulate their bodies prior to takeoff. Chief among them is something biomechanists call a countermovement: Rather than start their jump from a squatted position, the athlete begins from an upright standing position, initiates a downward movement by relaxing their muscles and flexing their knees and hips, quickly re-engages their muscles to slow and stop their descent, then generates upward momentum by extending their legs and exerting force down into the ground.

Many athletes run through this pre-flight checklist intuitively, and most can leap several inches higher during a countermovement jump than a squat jump. The mechanism isn’t entirely understood, but one reason for the performance boost is that a countermovement primes your muscles for a jump by recruiting them to halt your initial downward motion. “So at the lowest point of your crouch, your muscles are pre-tensed,” says Jesus Dapena, professor emeritus of kinesiology at Indiana University-Bloomington and an expert in jumping mechanics. Beginning the upward portion of your jump with your legs fully engaged, he says, maximizes the work your muscles can do through your entire vertical range of motion, allowing you to exert more force at the beginning of the jump and leave the ground at a greater velocity.

Exactly how much greater boils down to things like training and technique, but also to genetics. Dapena says that even with deliberate practice and a bounce-boosting weightlifting regimen, most people would probably never come anywhere close to Ungar’s leaping abilities. Which means that, at least until someone develops a gene therapy for more explosive leg muscles, us ground-bound mortals will have to settle for watching other people fly.

Instagram says it's not testing or building a reposting feature

Use GrowlNotifier To Send iOS Notifications Directly To Your Mac

Top 10 Common Ingredients That Are Weird