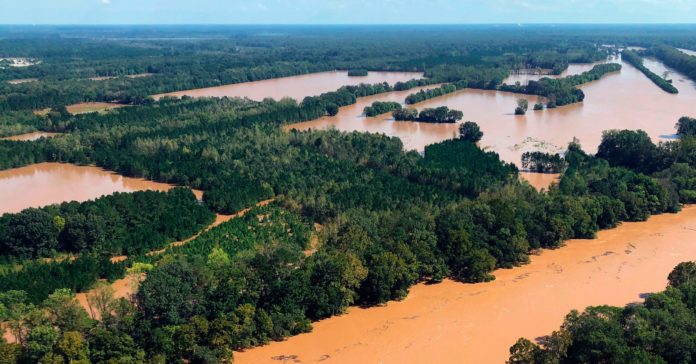 After the storm comes the flood. Hurricane Florence poured 8 trillion gallons of rain onto North Carolina, and now the landscape between the Cape Fear River and the barrier islands of the Carolinas is a waterworld. Because ecological disasters happen in irony loops, that means long-recognized hazards have now become add-on catastrophes. First the floodwaters found thousands of literal cesspools containing the waste of 6 million hogs, and on Friday the waters reached a pool of toxic coal ash.

The water has breached the cooling lake at the LV Sutton natural gas plant on the Cape Fear River, forcing it to shut down. Also onsite are two coal ash basins, at least one of which—containing 400,000 cubic yards of the stuff, according to the owner of the facility, Duke Energy—may already be leaking coal ash into the River.

Coal ash is the irony part. Coal-fired power plants had to be located near the mountains that harbored the coal, and near the waterways that the power plants needed for coolant and water to boil to spin the turbines. “One of the consequences of burning coal is you get ash, and then you have to have something to do with it,” says Stan Meiburg, director of graduate studies in sustainability at Wake Forest University and a former EPA deputy administrator, both in DC and the Southeast. “The earliest practices were to put the ash right near the power plant.”

Coal use has been tailing off in the US, but as recently as 2011 the country was generating 130 million tons of coal combustion residue, or CCR, every year. More irony: Better air quality management technology captured more fly ash before it could leap out of smokestacks, raising the amount of CCR. Dry, the ash flies all over the place and can be a toxic inhalant. But get it wet, like mud, and it stays still and is easier to transport to landfills.

After the carbon in coal gets oxidized, what’s left is a list of metals that you hope are not present in jewelry: lead, mercury, selenium, arsenic, cadmium, chromium and a bunch of other bad actors. For decades people suspected that the gunk in the pools might leach into groundwater, or that a storm could breach the walls of a pool and the ash slurry would get into a river or lake. There were indications that they might cause problems—the fish and amphibians in the lakes and streams near coal ash ponds had reproductive problems, organ damage, higher metabolic rates indicating some kind of physiological stress. Metals accrued in the animals that ate them. In one particularly disturbing outcome, researchers found tadpoles with scoliosis and mouth deformations—they were missing not just teeth but whole rows of teeth.

Hilariously, none of the more than 1,000 coal ash ponds in the US were regulated in any way at all. And then in 2008, one of them broke open and poured a billion gallons of slurry all over eastern Tennessee. Meiburg says he recalls estimates that it would have cost the pond’s owner, the Tennessee Valley Authority, $50 million to remediate; it cost over $1 billion to dig the ash-mud out of the river bottoms.

In 2014 it happened again. Two stormwater drain pipes beneath a Duke Energy coal ash pond in North Carolina collapsed, spilling 39,000 tons of ash and 27 million gallons of slurry into the Dan River. North Carolina passed regulatory laws. The EPA got some regulations together. By 2015, there was at least a schedule for utilities to get their coal ash put into safer landfills. “What the public interest community called for was closure of the unlined, dangerous ponds. The 2015 rule from the Obama administration didn’t go that far,” says Lisa Evans, senior counsel for the environmental group Earthjustice. “It improved the situation immensely, but it didn’t get the job done.”

Irony again: One of the first things the EPA did under President Trump was re-weaken those coal ash regulations.

And irony yet again: The coal ash at the Sutton plant? “The basins are slated to be closed by the middle of next year,” says Paige Sheehan, a spokesperson for Duke Energy. “Some of the material was taken by train to a lined structural fill. The remainder is being moved to a new lined landfill on site.” But Duke knows the situation is dicey. Another coal-burning byproduct the company stores at Sutton, cenospheres—microscopic, hollow spheres made of silica and alumina sometimes recycled into concrete or other composite materials— “are flowing into the Cape Fear River,” she says. “We cannot rule out that coal ash might also be leaving the basin.”

LV Sutton isn’t the only plant that’s a potential problem. Another site, the closed Grainger Generating Station near the Waccamaw River in South Carolina, has 200,000 tons of coal ash within reach of rising floodwaters. Sheehan says Duke’s also watching pools at another plant called HF Lee, in Goldsboro. “This is like a natural experiment going on down there right now, because the possibility of more pool systems like this failing and releasing their waste, combined with all the other waste from pig farm operations?” says Christopher Rowe, a biologist at the University of Maryland Center for Environmental Science. It’s hard to wrap your head around.”

How complex? The immediate risk depends on the volume that actually gets released, and the next couple of days at the high water mark will determine that. Living things in the waters downstream can absorb that wide spectrum of heavy metals suspended as solids, to varying effects. But then those solids sink to the bottom.

But it still could be dangerous. “Even if the water in the river becomes very clear, and you can’t find any traces of contaminants,” says Avner Vengosh, a water quality and geochemistry researcher at Duke University. “The coal ash buried at the bottom slowly but surely releases contaminants into the ambient environment.”

The source is “pore water,” water mixed into the coal ash sediments in the top five inches or so of the riverbed. There’s no oxygen down there, so that dirt becomes the electrochemical opposite of oxidizing, what chemists call “reducing.” The heavy metals behave very differently, becoming more bioavailable to any critters at the bottom. “In an oxidizing form, it would tend to be absorbed into the sediment. In a reduced form it tends to be soluble in the water,” Vengosh says.

So you have to clean that mud out—a dangerous process in itself. At least 30 people who worked on cleaning up the 2008 spill are dead and, reports say, 200 more are sick; a lawsuit is ongoing.

And time is a factor, because climate change means hurricanes will, like Florence, be more intense and drop more rainfall, some of them right onto the Carolinas. There’s the final irony: A major contributor to the greenhouse gases that cause climate change were, of course, all those coal-fired power plants.

Google Decides Not to Renew a Military AI Contract

How a Soviet A-Bomb Test Launched US Climate Science