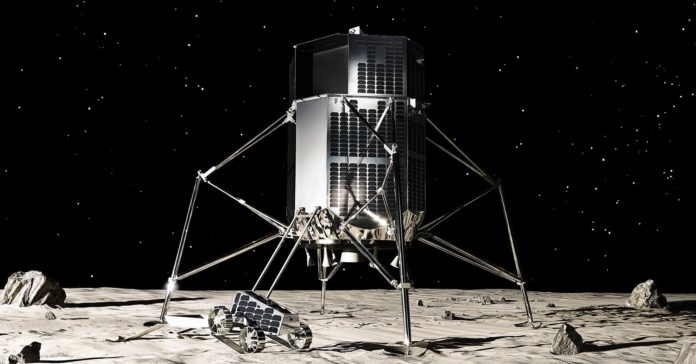 The Moon is a pretty barren place. Sure, there are a few buggies, some golf balls, a flag, urine bags, a family photo. But it’s mostly empty. If a company called ispace has its way, though, Earth’s closest space neighbor will soon(ish) be the site of a bustling, industrial city full of workers and tourists. Moon Valley, the dreamers call it. Yesterday, those dreamers announced the first small step in that journey, declaring that SpaceX Falcon 9 rockets will take an ispace orbiter-lander and its rovers to the Moon in 2020 and 2021.

After that, the plan goes, frequent missions will start scaffolding the infrastructure to come—hunting down, for instance, water that could be used as fuel. And then the industrialization will begin, building up a “platform for steady lunar development,” according to the company’s website. Ispace has 66 employees and headquarters in three countries, and it netted around $95 million in its first funding round—more than almost any space company, ever. One of its money-making ideas is to attach customers’ payloads to its future rovers and landers.

Ispace’s lunar ambitions are not unique. The Moon is maybe space’s hottest cold place right now: Jeff Bezos’s Blue Origin has a lunar settlement on the brain. Smaller organizations like SpaceIL and Moon Express, once contenders for the Google Lunar X Prize, are going forward alone. Then there’s the Indian government’s Chandrayaan-2 mission, with its lunar orbiter, lander, and rover. China’s Chang’e 4 is similar. Trump is urging NASA to visit that gray lady first, then jet on to red Mars. The list of lunar ambitions is long. But the reasons to make the Moon into a destination stem equally from its proximity, its personality, and political and financial whims—a fixture of space policy.

People love to quote the John F. Kennedy speech that set off the Apollo era. “We choose to go to the Moon,” they say, feeling important. If they are also feeling verbose, they quote more of Kennedy’s words: “We choose to go to the moon in this decade and do the other things, not because they are easy, but because they are hard.” Sometimes they simply say, “Space is hard,” usually as an excuse for delays and accidents.

Space types allude to this speech more than maybe anything else, except Buzz Aldrin’s small steps and giant leaps. This linguistic fondness reveals how much today’s explorers long for those good old days, or at least how much they love their own origin story. A few weeks ago, when SpaceX announced it would launch a billionaire and seven creatives to lunar orbit, billionaire Yusaku Maezawa said, “I choose to go to the Moon with artists.” His use of the first-person shows how spaceflight has changed in the past 50 years.

Nevertheless, Maezawa could reuse Kennedy’s phrasing because SpaceX is doing essentially the same thing NASA did a half-century ago. Been there, done that, if differently. And so we might be better served by quoting a different part of Kennedy’s speech: “But why, some say, the Moon?” he asked. “Why choose this as our goal?” Kennedy’s queries were rhetorical, their answers provided in other paragraphs: being first, establishing peaceful purpose, doing it because it’s hard, going because it’s there. But today, it’s a more complicated question with complicated answers.

Ispace, and other organizations with their eyes on lunar resources, are looking to develop both the Moon and an economy around it. That changed Moon could be a launchpad and refueling station for trips venturing farther afield. It could be a scientific research hub. A place to learn how to live and work long-term in an isolated place without an atmosphere. A national security outpost. An Apollo-esque beat ya.

The Moon, in other words, is many things to many people. But to some, it’s a hurdle.

The debate about whether humans choose to go to the Moon or to Mars (or to the Moon and then to Mars) has raged for a long time. Moon-firsters are sometimes called “lunatics,” Mars-firsters “martians.” Mars is more geologically interesting, more chemically interesting, could have once been habitable, and could tell us more about how planets go from being kind of nice to being kind of hellscapes. Also, it’s harder, and we haven’t done it yet.

On the other hand, it’s harder, and we haven’t done it yet. And the Moon is likely more lucrative: With Mars as far out of reach as it is, a lunar economy is likely to bustle much sooner than a martian one. “If you’re a company interested in going to space and making money, the Moon is a much better investment for you,” says Lucianne Walkowicz, the chair of astrobiology at the Library of Congress and an astronomer at the Adler Planetarium, in Chicago. Walkowicz is hosting a conference later this week called “Becoming Interplanetary” and previously hosted one called “Decolonizing Mars.” As a scientist, she’s more interested in using exploration to collect and interpret information that puts our own planet in proper cosmic context. Other planets and moons show us how planets work. But even among scientists, the destination debate isn’t really about whether the Moon or Mars is worthy of our bootprints: It’s about scarcity.

“I think that people would like to do all of those things,” says Walkowicz—go to the Moon, go to Mars, send more ships to other places in the solar system. “A lot of debate comes from the fact that it’s resource-intensive and there are limited resources.” That means limited financial support (especially since even the private exploration companies often depend on government contracts), and limited time: If explorers focus on the Moon, even as a prelude, that likely delays the journey to Mars.

Chris Carberry, CEO of Explore Mars, Inc., is working to figure out how lunatics and martians can work together, because neither faction is going anywhere. Maybe we can successfully choose to go the Moon—and to Mars. “We’re finding ways to achieve that goal that will also not delay Mars by decades,” he says. In addition to R&D alignment, perhaps the commercial players could do their lunar thing, and governments could focus Mars-ward.

Governments, though, are fickle. In the US, every new president has the opportunity to change space-exploration priorities. And even though private companies can technically do their own thing, savvy business people sometimes shift to where support is. George W. Bush was more of a Moon-first guy. Obama looked more Marsward (with a side trip to an asteroid). Under Trump, the Moon is once again in favor. “In an effort to define a space program that in some sense belongs to them and bears their mark,” says Walkowicz, “there’s a tendency to pivot to what the last guy didn’t say.” Destination can come to seem partisan.

That vacillation, says analyst Carlos Manuel Entrena Utrilla, is why private-sector exploration is important. “If we ever see sustained human presence anywhere beyond low-Earth orbit, and especially on the Moon or Mars, it will be through commercially viable development,” says Ultrilla, who works at consulting company McKinsey. “Any other approach that is based on public funding will eventually collapse when national priorities change, as it happened with Apollo.”

The trick, though, will be that many different companies will have to be ready at just the right moment, so they all have things to buy and sell. “That means that the miners need to come online at roughly the same time as the material processors,” says Utrilla, “and the manufacturers need to start producing once their customers are operating.”

In life as in love as in lunar exploration, timing is everything. Theoretically, now(ish) is a good time for ispace to be proving out the technology that could make Moon Valley real. Its lunar spacecraft designs recently passed preliminary design review, under scrutiny from a panel of 26 experts, and it plans to begin assembling hardware next summer. The rover design, while upgraded and updated, is based on the setup ispace already developed and built for the X Prize.

But what, and who, comes next remains to be seen. For ispace, success in the short term means orbiting the Moon in round one, and landing and deploying data-collecting rovers in round two. If that goes well, the company will go on to round three (through n), turning the Moon—with help from the other companies and governments that have designs on our planet’s satellite—into a useful place. An industrial pit, a pit stop, a playground. And this time, the goal is different: It’s not “we choose to go to the Moon.” It’s “we choose to change the Moon.”

Hassan Aftab - November 24, 2014 0
Glow-in-the-dark roads have been a popular discussion of late. They seem to be gaining popularity by the day. Vincent van Gogh concepts have finally...

Is data making your iPhone heavier?

'Star Wars' porg is available on Snapchat as your adorable AR...