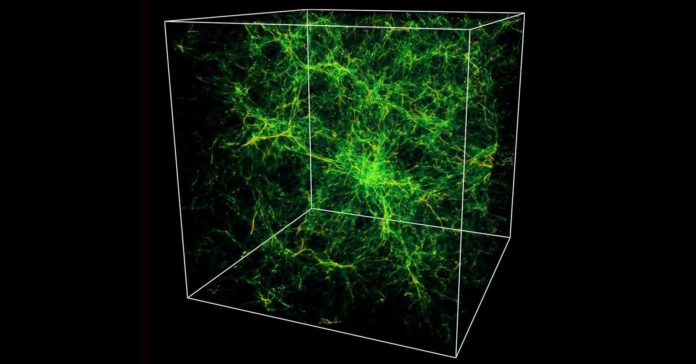 Astronomers have finally found the last of the missing universe. It’s been hiding since the mid-1990s, when researchers decided to inventory all the “ordinary” matter in the cosmos—stars and planets and gas, anything made out of atomic parts. (This isn’t “dark matter,” which remains a wholly separate enigma.) They had a pretty good idea of how much should be out there, based on theoretical studies of how matter was created during the Big Bang. Studies of the cosmic microwave background (CMB)—the leftover light from the Big Bang—would confirm these initial estimates.

Now, in a series of three recent papers, astronomers have identified the final chunks of all the ordinary matter in the universe. (They are still deeply perplexed as to what makes up dark matter.) And despite the fact that it took so long to identify it all, researchers spotted it right where they had expected it to be all along: in extensive tendrils of hot gas that span the otherwise empty chasms between galaxies, more properly known as the warm-hot intergalactic medium, or WHIM.

Early indications that there might be extensive spans of effectively invisible gas between galaxies came from computer simulations done in 1998. “We wanted to see what was happening to all the gas in the universe,” said Jeremiah Ostriker, a cosmologist at Princeton University who constructed one of those simulations along with his colleague Renyue Cen. The two ran simulations of gas movements in the universe acted on by gravity, light, supernova explosions and all the forces that move matter in space. “We concluded that the gas will accumulate in filaments that should be detectable,” he said.

Except they weren’t — not yet.

“It was clear from the early days of cosmological simulations that many of the baryons would be in a hot, diffuse form — not in galaxies,” said Ian McCarthy, an astrophysicist at Liverpool John Moores University. Astronomers expected these hot baryons to conform to a cosmic superstructure, one made of invisible dark matter, that spanned the immense voids between galaxies. The gravitational force of the dark matter would pull gas toward it and heat the gas up to millions of degrees. Unfortunately, hot, diffuse gas is extremely difficult to find.

To spot the hidden filaments, two independent teams of researchers searched for precise distortions in the CMB, the afterglow of the Big Bang. As that light from the early universe streams across the cosmos, it can be affected by the regions that it’s passing through. In particular, the electrons in hot, ionized gas (such as the WHIM) should interact with photons from the CMB in a way that imparts some additional energy to those photons. The CMB’s spectrum should get distorted.

Unfortunately the best maps of the CMB (provided by the Planck satellite) showed no such distortions. Either the gas wasn’t there, or the effect was too subtle to show up.

But the two teams of researchers were determined to make them visible. From increasingly detailed computer simulations of the universe, they knew that gas should stretch between massive galaxies like cobwebs across a windowsill. Planck wasn’t able to see the gas between any single pair of galaxies. So the researchers figured out a way to multiply the faint signal by a million.

First, the scientists looked through catalogs of known galaxies to find appropriate galaxy pairs — galaxies that were sufficiently massive, and that were at the right distance apart, to produce a relatively thick cobweb of gas between them. Then the astrophysicists went back to the Planck data, identified where each pair of galaxies was located, and then essentially cut out that region of the sky using digital scissors. With over a million clippings in hand (in the case of the study led by Anna de Graaff, a Ph.D. student at the University of Edinburgh), they rotated each one and zoomed it in or out so that all the pairs of galaxies appeared to be in the same position. They then stacked a million galaxy pairs on top of one another. (A group led by Hideki Tanimura at the Institute of Space Astrophysics in Orsay, France, combined 260,000 pairs of galaxies.) At last, the individual threads — ghostly filaments of diffuse hot gas — suddenly became visible.

(A) Images of one million galaxy pairs were aligned and added together. (B) Astronomers mapped all the gas within the actual galaxies. (C) By subtracting the galaxies (B) from the initial image (A), researchers revealed filamentary gas hiding in intergalactic space.
Adapted by Quanta Magazine

The technique has its pitfalls. The interpretation of the results, said Michael Shull, an astronomer at the University of Colorado at Boulder, requires assumptions about the temperature and spatial distribution of the hot gas. And because of the stacking of signals, “one always worries about ‘weak signals’ that are the result of combining large numbers of data,” he said. “As is sometimes found in opinion polls, one can get erroneous results when one has outliers or biases in the distribution that skew the statistics.”

In part because of these concerns, the cosmological community didn’t consider the case settled. What was needed was an independent way of measuring the hot gas. This summer, one arrived.

While the first two teams of researchers were stacking signals together, a third team followed a different approach. They observed a distant quasar — a bright beacon from billions of light-years away — and used it to detect gas in the seemingly empty intergalactic spaces through which the light traveled. It was like examining the beam of a faraway lighthouse in order to study the fog around it.

Usually when astronomers do this, they try to look for light that has been absorbed by atomic hydrogen, since it is the most abundant element in the universe. Unfortunately, this option was out. The WHIM is so hot that it ionizes hydrogen, stripping its single electron away. The result is a plasma of free protons and electrons that don’t absorb any light.

So the group decided to look for another element instead: oxygen. While there’s not nearly as much oxygen as hydrogen in the WHIM, atomic oxygen has eight electrons, as opposed to hydrogen’s one. The heat from the WHIM strips most of those electrons away, but not all. The team, led by Fabrizio Nicastro of the National Institute for Astrophysics in Rome, tracked the light that was absorbed by oxygen that had lost all but two of its electrons. They found two pockets of hot intergalactic gas. The oxygen “provides a tracer of the much larger reservoir of hydrogen and helium gas,” said Shull, who is a member of Nicastro’s team. The researchers then extrapolated the amount of gas they found between Earth and this particular quasar to the universe as a whole. The result suggested that they had located the missing 30 percent.

The number also agrees nicely with the findings from the CMB studies. “The groups are looking at different pieces of the same puzzle and are coming up with the same answer, which is reassuring, given the differences in their methods,” said Mike Boylan-Kolchin, an astronomer at the University of Texas, Austin.

The next step, said Shull, is to observe more quasars with next-generation X-ray and ultraviolet telescopes with greater sensitivity. “The quasar we observed was the best and brightest lighthouse that we could find. Other ones will be fainter, and the observations will take longer,” he said. But for now, the takeaway is clear. “We conclude that the missing baryons have been found,” their team wrote.

Top 10 Things Every Man Should Be Able To Do In...

GizmoCrazed - November 4, 2013 0
We all know guys LOVE food - they just aren't always that great at making it. Still every guy should master these 10 culinary...

The Controversial Link Between Epic Storms and a Warming Arctic