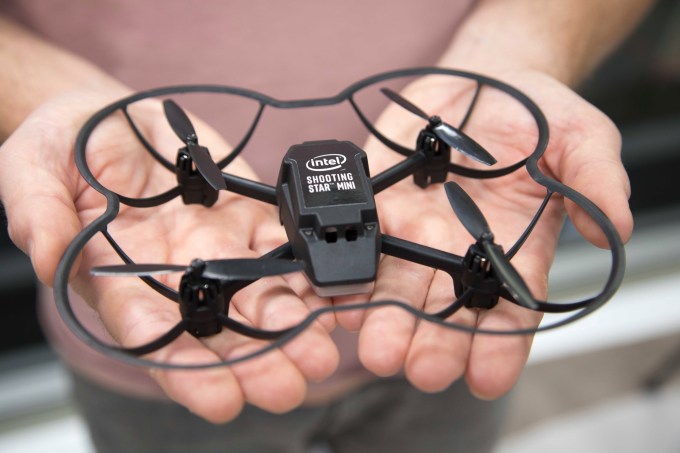 It didn’t hurt. I thought someone dropped a small cardboard box on my head. It felt sharp and light. I was sitting on the floor, along the back of the crowd, and then an Intel Shooting Star Mini drone dropped on my head.

Audi put on a massive show to reveal its first EV, the e-tron. The automaker went all out, putting journalists, executives and car dealers on a three-story paddle boat for a two-hour journey across the San Francisco Bay. I had a beer and two dumplings. We were headed to a long-vacated Ford manufacturing plant in Richmond, Calif.

By the time we reached our destination, the sun had set and Audi was ready to begin. Suddenly, in front of the boat, Intel’s Shooting Star drones put on a show that ended with Audi’s trademark four ring logo. The show continued as music pounded inside the warehouse, and just before the reveal of the e-tron, Intel’s Shooting Star Minis celebrated the occasion with a light show a couple of feet above attendees’ heads.

That’s when one hit me.

Natalie Cheung, GM of Intel Drone Light Shows, told me they knew when one drone failed to land on its zone that one went rogue. According to Cheung, the Shooting Star Mini drones were designed with safety in mind.

“The drone frame is made of flexible plastics, has prop guards, and is very small,” she said. “The drone itself can fit in the palm of your hand. In addition to safety being built into the drone, we have systems and procedures in place to promote safety. For example, we have visual observers around the space watching the drones in flight and communicating with the pilot in real-time. We have built-in software to regulate the flight paths of the drones.”

After the crash, I assumed someone from Audi or Intel would be around to collect the lost drone, but no one did, and at the end of the show, I was unable to find someone who knew where I could find the Intel staff. I notified my Intel contacts first thing the following morning and provided a local address where they could get the drone. As of publication, the drone is still on my desk.

I have covered Intel’s Shooting Star program since its first public show at Disney World in 2016. It’s a fascinating program and one of the most impressive uses of drones I’ve seen. The outdoor shows, which have been used at The Super Bowl and the Olympics, are breathtaking. Hundreds of drones take to the sky and perform a seemingly impossible dance and then return home. A sophisticated program designates the route of each drone, GPS ensures each is where it’s supposed to be and it’s controlled by just one person.

Intel launched an indoor version of the Shooting Star program at CES in 2018. The concept is the same, but these drones do not use GPS to determine their location. The result is something even more magical than the outside version because with the Shooting Star Minis, the drones are often directly above the viewers. It’s an incredible experience to watch drones dance several feet overhead. It feels slightly dangerous. That’s the draw.

And that poses a safety concern.

The drone that hit me is light and mostly plastic. It weighs very little and is about 6 inches by 4 inches. A cage surrounds the bottom of the rotors, though not the top. If there’s a power button, I can’t find it. The full-size drones are made out of plastic and Styrofoam.

Safety has always been baked into the Shooting Star programs, but I’m not sure the current protocols are enough.

I was seated on the floor along the back of the venue. Most of the attendees were standing, taking selfies with the performing drones. It was a lovely show.

When the drone came down on my head, it tumbled onto the floor and the rotors continued to spin. A member of the catering staff was walking behind the barrier I was sitting against, reached out and touched the spinning rotors. I’m sure she’s fine, but when her finger touched the spinning rotor, she jumped in surprise. At this point, seconds after it crashed, the drone was upside down, and like an upturned beetle, continued to operate for a few seconds until the rotors shut off.

To be clear, I was not hurt. And that’s not the point. Drone swarm technology is fascinating and could lead to incredible use cases. Swarms of drones could quickly and efficiently inspect industrial equipment and survey crops. And they make for great shows in outside venues. But are they ready to be used inside, above people’s heads? I’m already going bald. I don’t need help.

Facebook admits it didn't do enough to prevent 'offline violence' in...

When Healthcare and Computer Science Come Together [INFOGRAPHIC]

How The Best Jumpers in the World Fly So Damn High