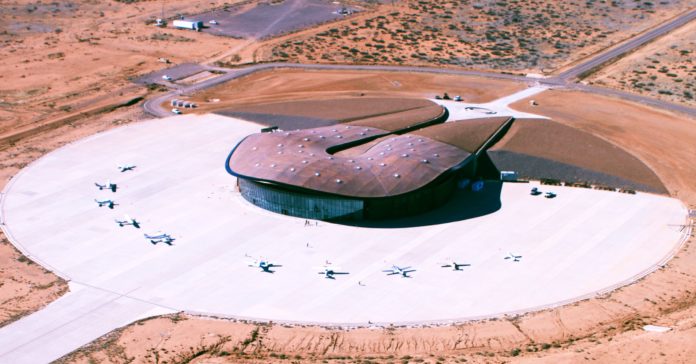 “The first mile is free,” Colorado’s governor, John Hickenlooper, says into a microphone. He’s smiling from a stage in Denver’s air and space museum, backed by a giant American flag that hangs near the bay doors of this repurposed military hangar.

His audience has gathered to celebrate the FAA’s recent approval of a new Colorado spaceport, located a mile above sea level. They laugh at Hickenlooper’s statement: They love this catchphrase. High elevation is, after all, Colorado’s claim to fame. And when you’re talking about flinging things into space, starting out 5,280 feet higher actually does make a difference.

Sending things to space is theoretically what happens at a spaceport, though business has been less than bustling. From Colorado’s shiny new station, located at the Front Range Airport in Adams County, and the 10 other spaceports in the US, private companies hope to launch rockets and spaceplanes that will carry rich astro-tourists and satellites. But the launch industry hasn’t matured as quickly as those companies had predicted. Which means there’s no real need for all these spaceports right now. Of the 90 orbital launches last year, for example, just 29 took place in the US—a load easily handled by the existing sites.

Yet cities keep sprouting spaceports. The Federal Aviation Administration had already licensed ports in Texas, Florida, California, Alaska, Virginia, Oklahoma, and New Mexico, before this Colorado one came along. The problem? Of the 10 active sites last year, only three launched anything at all. “For many of us who’ve been following the commercial space industry for the past 10 to 15 years, I think it’s going slower than everybody had hoped,” says Brian Gulliver, aerospace and spaceport practice leader at Kimley-Horn, a consulting group. “We expected more launch vehicles to be operating now.”

The first four spaceports were approved in the late ’90s, with three more joining them in the aughts, and another four this decade. What they lack in launches, though, they gain in marketing. These cities hope that by some law of attraction, spaceports will draw other aerospace businesses to their locales. And then, when the rockets and spaceplanes are ready, the city will be too. “I’m hopeful that in the future, as launch operations increase, these spaceports will see sufficient activity to justify their investment,” says Gulliver. “It’s more of a long-term thing than a near-term thing.”

The desire among cities to become a space-innovation magnet is not a secret. Almost two years ago, when I spoke to Dave Ruppel, now the CEO of the Colorado Air and Space Port, he made the case plainly, if in business-speak: “The value for us and for the state of Colorado is to attract companies that will help to build high-tech or aerospace-type technology clusters,” he said.

At the inaugural spaceport event—the result of Ruppel’s and others’ six-year slog through the FAA application process—others echoed this idea. John Barry, CEO of the air and space museum, projected that the area could become a cosmic version of Silicon Valley: Black Sky Valley. Aerospace Valley.

“I think you just invented a hashtag,” said the emcee.

Colorado has a reason to be dreaming about a future space launch industry, even if the business case is currently weak. It’s the state with the highest number of aerospace jobs per capita, with Lockheed Martin, United Launch Alliance, Northrop Grumman, and Boeing all calling the state home, along with a healthy smattering of space startups in their shadows.

Though spaceports typically call to mind the launchpads at Florida’s Cape Canaveral, the Colorado Air and Space Port is not in fact a rocket spot. It has a horizontal launch license, instead. (The FAA offers both kinds.) Officials describe a time when passengers will buckle into seats on spaceplanes for super-short suborbital flights to Tokyo, shrinking the world. These powerful planes use jet-type engines to take off from lateral runways, igniting rocket engines only after they’re high up, and then coasting down to land on a runway after reaching space. Others, like the Stratolaunch plane being developed in California, carry up rockets that they release once in flight. (Colorado doesn’t have the go-ahead for that kind of spaceplane.) Horizontal launches are considered less dangerous to the people around the spaceport, and startup costs are often lower: They can be tacked onto existing airports, with their existing runway-and-hangar infrastructure.

Cecil Airport in Jacksonville was early to go the horizontal route. Once a naval air station, Cecil later became an international airport before adding “space” to its list of destinations in 2010. In the eight years since Cecil got its license, though, no commercial launches have taken place. “What the Jacksonville Aviation Authority recognizes more than anything is it’s an economic driver for the community,” says director Todd Lindner. It provides, for instance, construction jobs to support a new hangar and future space control center. And the port has a deal with Generation Orbit, a launch company, which has done tests on-site.

One state over, in Georgia, coastal Camden hopes to get vertical-launch approval from the FAA. This site, too, comes with historical aerospace baggage: In the 1960s, it was a test spot for Thiokol Chemical Company, where engineers tried out the then-largest rocket engine. Camden Spaceport will help create the Georgia Space Coast, says Steve Howard, the proposed project’s lead and the county administrator. Like the famous Florida Space Coast, but in Georgia.

The boom in spaceports is just the latest example of the space community’s irrepressible optimism. But history provides cautionary case studies. New Mexico’s Spaceport America, for example, opened in 2011 and is now an emptier-than-expected monument to unfulfilled promises and overambitious deadlines, financed by tax dollars ($209 million of them) to dubious and opaque economic advantage. “For now,” said one Atlantic article about the venture, “the spaceport is a futurist tourist attraction, not an operational harbor to the cosmos.” Still, there’s a there there: In late August, suborbital rocket company EXOS Aerospace tested one of its vehicles at Spaceport America, sending it soaring 28 miles up. The private space revolution might come through yet.

Spaceports, though, aren’t only banking on the slow-to-ripen commercial industry. The federal government is also planning to strengthen its satellite infrastructure, and aspires to send up new satellites quickly if the need arises, which could spell many more launches.

The Colorado Air and Space Port can’t send satellites into orbit, and its exact role in the space industry is still TBD, as with most other ports. The first mile will always be free; but the question is, will anyone pay for the rest?

GizmoCrazed - October 1, 2017 0
“Is UR safe?” read a chalked message on a walkway on the University of Rochester’s campus on Sunday night, September 10. “Not for women....