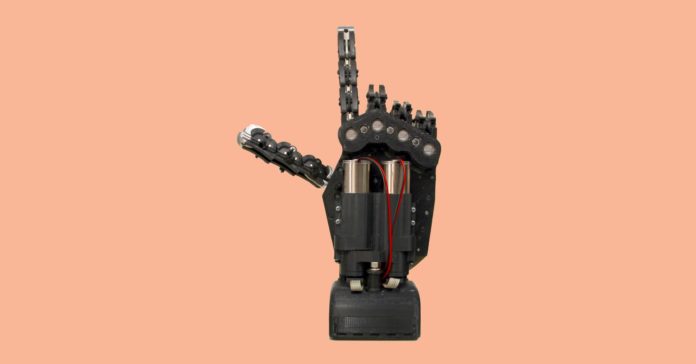 If you want to survive the robot apocalypse—the nerd joke goes—just close the door. For all that they’re great at (precision, speed, consistency), robots still suck at manipulating door handles, among other basic tasks. Part of the problem is that they have to navigate a world built for humans, designed for hands like ours. And those are among the most complex mechanical structures in nature.

Relief for the machines, though, is in sight. Researchers at the University of Pisa in Italy have developed a stunningly simple, yet stunningly capable robotic hand, known as the SoftHand 2, that operates with just two motors. Compare that to the Shadow Dexterous Hand, which is hypnotizingly skillful, but also has 20 motors. The SoftHand promises to help robots get a grip at a fraction of the price.

Like other robot hands out there, the SoftHand uses “tendons,” aka cables, to tug on the fingers. But it’s arranged in a fundamentally different way. Instead of a bunch of cables running to individual fingers, it uses just one cable that snakes through pulleys in each finger. Which gives it a bit less dexterity, but also cuts down on cost and power usage. And that’s just fine: There’s no such thing as a one-technique-fits-all robotic manipulator. More complex robot hands will undoubtedly have their place in certain use cases, as might SoftHand.

To create this hand, the researchers originally built a simpler SoftHand with just one motor. “The idea is that when you turn the motor, the length of the tendon shrinks and in this way you force the hand to close,” says roboticist Cosimo Della Santina, who helped develop the system.

Let out the tendon and the fingers once again unfurl into a flat palm, thanks to elasticity in the joints. It works great if you want to, say, grip a ball. But because the fingers move more or less in unison, fine manipulation isn’t possible.

By adding one more motor, SoftHand 2 ups the dexterity significantly. Take a look at the images above. Each end of the tendon—which still snakes through all the fingers—is attached to one of two motors in the wrist. If you move the motors in the same direction, the tendon shortens, and you get the gestures in the top row: A, B, C, and D. Same principle as the original SoftHand.

But run the motors in opposite directions, and something more complex unravels in E, F, G, and H. In this case, one motor lets out the tendon, while the other reels it in. “If you have a tendon moving through a lot of pulleys, the tension of the tendon is not constant,” says Della Santina.

Take a look at the GIF above and you can see the difference an extra motor makes. That’s one motor in the hand on the left, and two in the hand on the right. The former sort of brute-forces it, collapsing all its fingers around the ball. The latter, though, can more deliberately pinch the ball, thanks to the differences in tension of the tendon. Same principle below with the bank note.

Given that it’s working with just two motors, SoftHand can pull off an impressive array of maneuvers. It can extend an index finger to unlatch a toolbox or slide a piece of paper off a table. It can even unscrew a jar. All of it on the (relative) cheap. Because lots of motors = lots of money.

“For robots to learn and do cool stuff, we need cheap, reliable, and complex systems,” says Carnegie Mellon University roboticist Lerrel Pinto, who works on robot manipulation. “I think their hand strikes this balance,” he adds, but the real test is whether others researchers find uses for it. “Can it be used to autonomously learn? Is it reliable and robust over thousands of grasps? These questions remain unanswered.”

So SoftHand has promise, but more complicated robotic manipulators like the Shadow Dexterous Hand still have lots to offer. The SoftHand might be good for stereotyped behaviors, like unscrewing jars, while the Shadow and its many actuators might adapt better to more intricate tasks.

Fist bumps, though? Leave that to old Softie.

GizmoCrazed - November 17, 2017 0
Tesla’s Semi is an all-electric semi truck, which itself is a major feat, but its powertrain isn’t the only technological innovation that the automaker...

Trump's Attacks on the Environment Are Mostly Failing