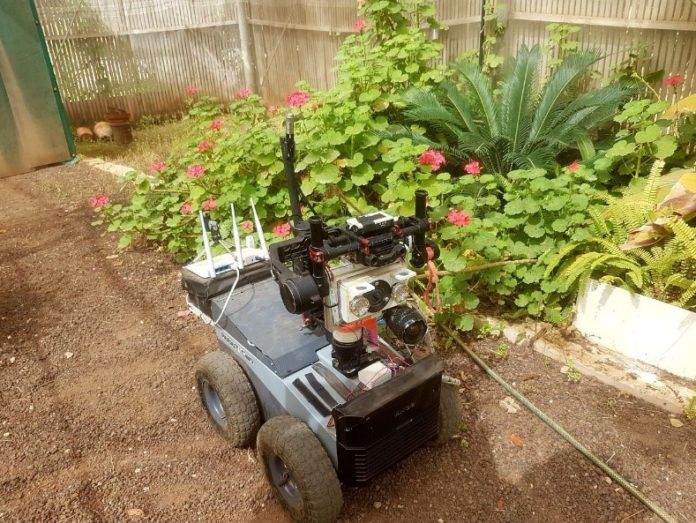 Bats can fly nimbly at night in large part because echolocation helps them “see” in the dark. Now researchers say they have created the first robot to use echolocation like a bat to help it explore its surroundings fully autonomously.

Bats echolocate by emitting clicks and listening to what the echoes of these sounds can reveal about what they reflected off. They can use echolocation to simultaneously map and navigate through new locations, a set of problems they routinely solve “that engineers find very difficult,” said study senior author Yossi Yovel, a bat expert at Tel Aviv University in Israel.

There were many previous attempts to use airborne sonar to help robots map and move through environments. However, whereas bats just rely on relatively few clicks emitted at targets and just two ears to hear echoes, prior work to copy bats typically used arrays of multiple speakers and multiple microphones. In addition, in prior work, these robots did not pilot themselves — instead, people used the sonar data to drive the robots.

Now scientists in Israel and their colleagues have designed a robot that uses sonar like a bat to help it navigate without any outside help. (Sadly, this “Robat” cannot fly, instead using wheels to drive across the ground.)

Robat has an ultrasonic speaker that mimics a bat’s mouth and two ultrasonic microphones that mimic bat ears. While moving at the leisurely rate of roughly a meter a minute, after every 30 seconds or so, it stopped and gave three chirps each 0.035 seconds long while pointing its speaker at three different angles. This helped it scan out to a range of about six meters. The robot then used a neural network – a kind of artificial intelligence system – to analyze the echoes and help it recognize objects like walls and plants, and changed its heading if necessary to avoid obstacles fully autonomously.

In the past, flying robots with sonar used speakers that broadcast a narrow range of sound frequencies. But Robat emitted wide-band signals just like bats, whose echoes carry rich amounts of details about what they reflect off. This helped Robat make do with just one emitter instead of several.

In experiments, the Robat successfully navigated two greenhouses without hitting anything. “The most surprising thing is that it works,” said study lead author Itamar Eliakim, a mechanical engineer at Tel Aviv University. “We are using very simple algorithms, which all work in theory, but it was not clear to us that they would work in reality. The fact that we built a fully autonomous acoustic robot was not trivial.”

Any robot that needs to navigate — that is, most robots — “can benefit from our echo-based navigation algorithm,” Eliakim said. “This includes service robots such as the vacuum cleaner robot that needs to navigate in your living room, agricultural robots navigating in a greenhouse or rescue robots navigating under the ruins of a house that collapsed as a result of an earthquake.”

Future research could lead to more bat-like droids, such as placing ears around the microphones to help funnel sound into them, or mounting their sensing unit on a flying robot, Eliakim said.

The scientists detailed their findings online Sept. 6 in the journal PLOS Computational Biology.