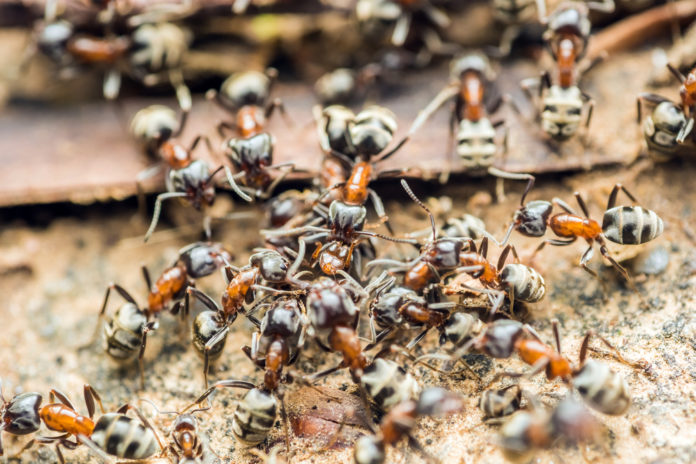 In Kurt Vonnegut’s dystopian novel, Player Piano, things get a little awkward after industrialist Dr. Paul Proteus, escorted in a black government limo, passes a crew of “Reeks and Wrecks,” or displaced laborers who could no longer compete economically with the machines that filled factories like Proteus’ Illium Works.

In the street, some 40 construction workers are hunched over shovels and pitchforks, all watching a single man fill a two-foot-wide pothole. With an abundance of idle hands, it’s no wonder the machines conquered the factory floor! At least that’s one takeaway here from Vonnegut — that, and a nihilistic commentary on the linkages between human dignity and work.

However, contrary to industrialist dogma, sitting around and doing absolutely nothing could be one of the best ways to boost the productivity of the wider group, especially for worker ants on excavation duty for their colony.

That’s the insight from researchers at the Georgia Institute of Technology who monitored the excavation operations of fire ant colonies to arrive at this counterintuitive conclusion.

GIT physics professor Daniel Goldman and colleagues monitored the activities of 30 ants with painted abdomens to identify each individual. They noticed that only a small number of workers did most of the digging, while the rest of the ants just sat around on their tarsal claws. When a busy ant grew fatigued, an idle ant would step into duty for a spell. Sometimes a worker ant would enter a tunnel and simply turn around without a payload. Inefficient, right? Not so.

When Goldman and team mathematically modeled this apparent inequality of labor, they found that 30 percent of the ants doing 70 percent of the work was actually the most efficient use of their labor pool.

If too many ants jumped into tunneling duty, it caused traffic jams and clogs in the tunnels, while too few ants working also hampered productivity. By adjusting the balance of ants working versus sitting idle, the colony instinctively found the sweet-spot for maximum efficiency.

The ants, it turns out, were exquisitely modeling what’s known as the fundamental diagram of traffic flow, which plots a clear connection between the density of traffic and vehicle velocity. By looking at the chart, you can easily calculate the most efficient balance between speed and volume. Metered on-ramps and “Lexus lanes” are a few tricks traffic engineers use to bring our commutes closer to the Goldilocks zones on the fundamental diagram.

And, in a true Player Piano twist, these researchers’ investigation of the efficiencies of idleness could help make swarming robots more useful.

Researchers constructed an ant-inspired optimization model that they then loaded into autonomous robots who were given a tunneling task. Using the example set by ants, the autonomous bots avoided mechanized clogs and finished the job in the most energy efficient manner possible. Researchers published their findings Wednesday in the journal Science.

Using anty logic to optimize the movements of autonomous swarms of tunneling robots, researchers say, could improve their efficacy in disaster recovery, mining or even building underground shelters for planetary explorers.

On the other hand, these hyper-efficient robot swarms could simply send a large contingent of red-blooded laborers into the Reconstruction and Reclamation Corps to dawdle with their picks and shovels while watching someone else finish the job.

Let’s hope for the former.

Fasting and Exercise: A Perfect Pair?