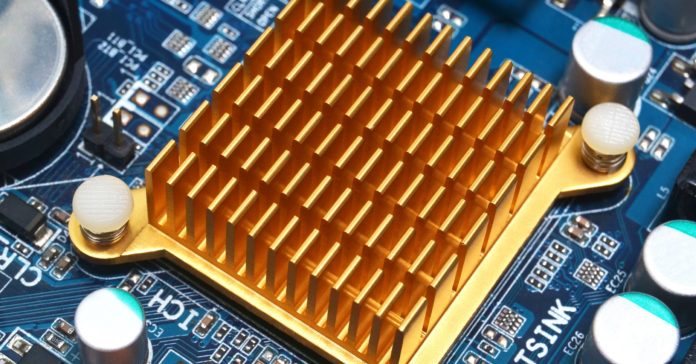 Welcome to another chapter in my ongoing saga entitled “big things are not small things.” In this edition of big vs. small, let’s look at hot stuff. Here I have three aluminum objects. A large block, a small block, and a heat sink.

Just for reference, the big block is about 14 centimeters long and the smaller block is almost 4 centimeters long (with the heat sink a little bit bigger than that). Of course none of these objects are cubes—but that’s OK. So here’s what I did. I put these in the oven for about an hour and then I took them out. Here’s what they look like (with an infrared camera).

In case you can’t tell, this shows the same three pieces of aluminum. Out of the oven, they are pretty hot (about 140 °C Celsius). I’m not sure why, but it looks like the smaller block is already significantly cooler. But anyway, they are hot. After an hour of sitting out of the oven, they look like this.

Notice how you can barely see the two smaller pieces? This is because they are about the same temperature as the surroundings. Yes, my garage is sort of hot right now. However, the large block is still quite warm—about 51 °C. Why? It’s because large objects aren’t the same as small objects.

Of course, that’s not a very good answer. Here’s a better one:

It may not be very surprising to say that hot objects eventually reach an equilibrium temperature with the surroundings. For an object like a block of aluminum, this thermal interaction can happen through thermal conduction (touching other objects) and thermal radiation. Let’s just assume that the blocks cool off primarily through radiation.

The Stefan-Boltzman Law describes the rate of energy output (the radiated power) for a particular object. This power depends on both the temperature and the surface area of the object. As an equation, it looks like this (assuming it is a perfect object that only radiates and does not absorb any external radiation).

In this expression, A is the surface area, T is the temperature and σ is a constant (not surprisingly called the Stefan-Boltzman constant). But of course the most important part is the area. If you double the area, you double the power.

Since block B has a larger side, it has a surface area that is four times larger. This means that the power output is also four times larger. So, it would cool off faster? Right? Not so right. While it’s true that the bigger block has a faster decrease in energy, it also has more energy.

Let’s look at the change in energy for a temperature going from 100 °C to 90 °C. The energy change also depends on the object’s mass and the type of material. This can be described with the following equation:

If you double the length of the side of a cube, what happens to the mass? Assuming a density of 2.7 grams per cubic centimeter, I will calculate the mass of these two blocks.

Like I said, when it comes to cooling stuff off—size matters.

Now for three examples in the real world.

One last thing. What if someone wanted to find out how long it would take a super hot block of aluminum to cool down through only radiation? (Maybe it’s in deep space—I don’t know why.) It’s not such a straightforward solution to this problem. The rate at which it cools off depends on the temperature (via the Stefan-Boltzman Law) such that the cooling rate is not constant. One simple way to calculate the temperature is to break the problem into small steps of time. If the time step is small, then the power is approximately constant and I can use that to calculate the change in energy (and change in temperature).

Of course by breaking a problem into many smaller problems means that it’s going to be a lot of tedious calculations. I don’t know about you, but I like to skip over boring stuff—that’s why this is a perfect case for a numerical calculation with python.

So here you go. Here is a calculation of the cooling for the two aluminum blocks above. I did make one change—instead of starting at 100°C, they are are 500°C. Go ahead and look at the code (just click the “pencil” icon). Feel free to change stuff. You can’t break it.

GizmoCrazed - April 30, 2018 0
Most players prefer PC over a laptop for enjoying heavy games due to a lot of reasons such as insufficient cooling system, less possibility...

Apple Brings Out Updates To iWork And iLife Apps

20 Things You Didn't Know About … Diamonds