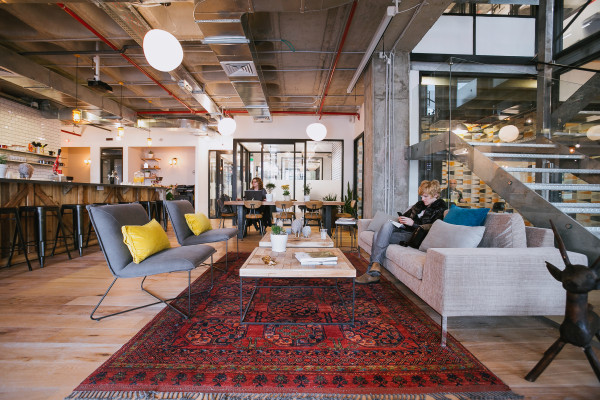 According to U.S. Census data, the number of mid-sized companies with 11 to 250 employees account for 1.1 million companies in the country and employ approximately 30 million people. In many cases, these companies have begun seeing growth but are not ready (or financially capable enough) to settle into a long-term office space that they may soon outgrow.

“Be it those lifestyle businesses that are going to be 30 people forever, a small law firm, or a tech firm, we believe very strongly in companies of that size and how important they are to their local economies,” WeWork Chief Growth Officer Dave Fano told TechCrunch. “Often times space is still very much a challenge for companies of that size and the way they have to make these [office space] commitments ends up probably being an inhibitor to their growth.”

To better meet the needs of these companies, HQ by WeWork offers private office floors (leased and managed by WeWork) that companies can move into for flexible leasing periods — typically for a minimum of 12-24 months. But, should a company outgrow its space in six months, Fano said WeWork will work to accommodate a move to support its growth.

Unlike WeWork’s Powered by We model, which allows companies to bring the management of WeWork to spaces they rent themselves, companies using HQ by WeWork can leave the ins-and-outs of office real estate to the office-sharing company.

HQ by WeWork offers spaces with customizable color schemes and branding incorporation, private entrances and a service-lite model of WeWork management that includes essentials (IT, AV, etc.) but without all the bells and whistles (e.g. full conference rooms, events) that come with a typical WeWork office space. This paring down of amenities allows it to offer these spaces at a lower price per person than a typical WeWork accommodation, Fano told me. That said, HQ tenants can still drop-by any WeWork facility to utilize the features their spaces lack.

So far, WeWork has leased six HQ spaces in New York City and is actively working to expand HQ by WeWork into all the company’s flagship cities, such as Los Angles and Toronto.

GizmoCrazed - March 3, 2018 0
These days, home movies aren’t recorded with handheld video cameras, but rather with our smartphones. Unfortunately, there’s a downside. Our iPhones default to lower...

10 Most Annoying Facebook Statuses That Need To Stop Right Now