Watch a Harlem Globetrotter Sink a Shot from a Plane 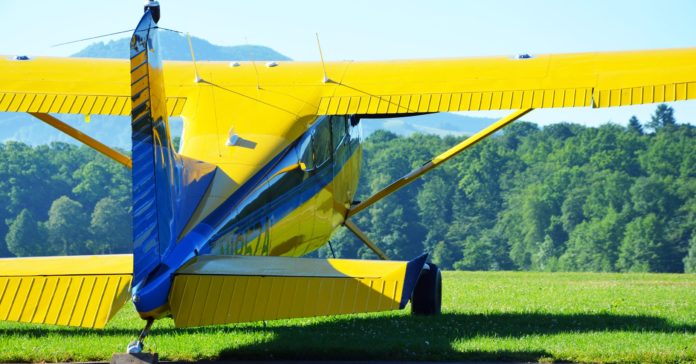 Oh, you think you are pretty awesome with the basketball trick shots? Well, maybe you are—but can you score with a shot from an airplane as it flies by? That’s what we have here with the Harlem Globetrotters (although it seems like Dude Perfect might have done this too).

For me, this is a classic physics problem. If you open up your introductory physics textbook you will find a problem just like this. I promise it’s there. It looks something like this:

A pilot needs to fly by and drop a package to a human (feel free to add your own back story). The plane flies at an altitude of 10 meters with a speed of 20 m/s. At what horizontal distance before the drop location should the package be dropped?

Here is a diagram to go with the problem.

If you are a Harlem Globetrotter, you can replace the target with a basketball hoop.

I’ll be straightforward with you—this is really just a projectile motion problem. Once the ball leaves the plane, there is basically just one force acting on it—the gravitational force pulling straight down. This gives the ball a vertical acceleration of 9.8 m/s2 and constant horizontal velocity. That is pretty much the definition of projectile motion. But what about air resistance? Yes, that might have a small effect, but I will leave the investigation of air resistance as a homework problem for you (at the the end).

This means that I can take one direction (let’s say the y-direction) and solve for the time it takes to move. I can then use that same time for the x-direction and find something useful. That’s exactly what I’m going to do. There will be some math, so prepare yourselves. Also, I’m going to solve this without putting any values in (like height and stuff) until the end—that’s the physics way.

Here is what I have to start with.

Since the final position is zero and the initial velocity is zero m/s, I can use this to solve for the time of motion. I’m skipping some of the algebraic steps—you can go back and do these for yourself.

Now, with this time I can use it in the horizontal motion. I know the ball’s x-velocity and the time so that I can solve for the starting position. Remember the x-acceleration is zero m/s2.

Boom. That’s it. Now let’s make some approximations and put in values for the altitude and the starting velocity. I’m going to guess that this plane is going about as slow as it can go. The stall speed of a Piper Cub is about 38 mph so I will use a starting velocity that’s a little bit faster—let’s call it 20 m/s. A standard basketball hoop is 3.05 meters—so let’s say the plane is twice this height at 6.1 meters. Putting these values into the solution above gives an horizontal distance of 22.3 meters. That is the point that you should let go of the ball.

But wait! There’s more. Since the Globetrotters produced a video of the event from the side, I can also use video analysis to plot the motion of the basketball—just for fun. The basic idea is to mark the location of the ball in each frame of the video to get position and time data. For this task, I always use my favorite free software—Tracker Video Analysis.

From this analysis, let me share two plots. First, this is the trajectory (vertical vs. horizontal position) for both the plane and the ball (a short time after it was dropped).

A couple things to notice. At each time (frame) the ball has the same x-position as the plane. Both the ball and plane are moving with the same horizontal velocity. But what about the vertical position of the plane? Why does the altitude decrease? My guess is that it doesn’t decrease—instead there is an apparent change in altitude because of the way the camera is set up. As the plane moves, its distance from the camera changes, which changes its apparent size. Since I am using the size of the basketball goal for the scale, this means the altitude will be off a little bit. Not too big of a deal though.

Now for my next plot. This is both the horizontal and vertical position of the ball as a function of time.

Enough playing around. Now it’s time for some homework. Here are some questions for you.